Connecticut woman competes in a 5K road race at age 100 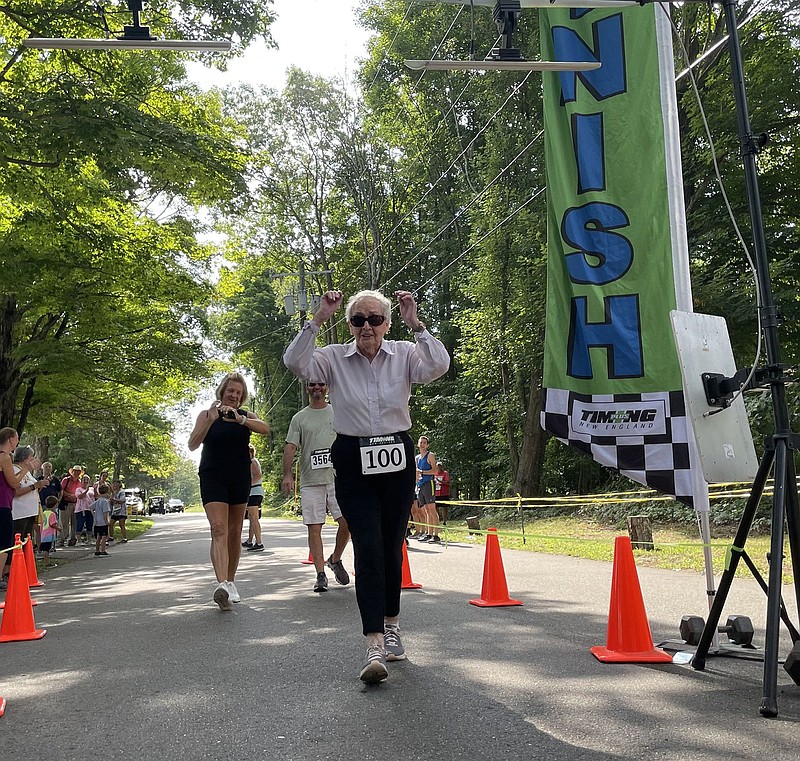 That was last September, at the Haddam Neck Fair 5K. She finished the 3.1-mile race in 56 minutes.

On the morning of Sept. 4, she was back on the starting line, a week after celebrating her 100th birthday on Aug. 28. She finished the 5K -- walking with her son Chuck Roberts and daughter-in-law Donna Roberts, listening to a little Frank Sinatra -- in 1 hour, 31 seconds.

"She's 40 years older than I am and she doesn't slow down," Donna said. "She sets the pace, and we follow her."

Roberts, of Haddam, won her age group -- 80-plus -- and was presented a medal by the race organizers while the other runners cheered. After the awards ceremony, several runners asked to have their picture taken with her.

"I thought it sounded like fun," said Roberts, who grew up in East Hampton and remembered going to the fair (which started in 1909) as a child with her grandparents.

"I just thought I'd do it and come at the tail end and go home. I didn't expect all this."

Roberts is a walker; she walks more than 2 miles a day. She also plays bocce and occasionally stays up until 11 p.m. playing bridge at her senior living facility.

Her grandchildren, Chuck's children, were runners at East Hampton High School and they all ran the Haddam Neck Fair race several times, and Roberts would always come and watch.

Last year, Chuck asked her, on a whim, if she wanted to do the race herself.

"We might retire after this year. Well, maybe I will."

Roberts was always active. She taught dance lessons when she was younger. She skied. She golfed until a shoulder injury at age 80 forced her to stop. But she kept walking. Her husband Cullen (whom she met while teaching dance) died in 1999. Two of her three sons passed away.

"She takes one pill a day," Donna said. "She's completely healthy. It's her attitude. She's overcome a lot of obstacles and kept going."

She broke her pelvis two years ago, then contracted COVID-19. She got through that. Kept going.

On Sept. 4, she wore a blouse and slacks for the race. The year before at the race, Donna said, she wore pearls with her outfit.

Just as the race started, the sun came out and it was hot and fairly humid. There was a short steep hill at the start of Mile 3. They had to stop a few times on the hill. Roberts called it "a beaut."

But as the clock clicked just more than an hour, there was Roberts, not a hair out of place, walking purposefully through the finish line chute. People cheered and took pictures.

"We were five minutes slower than last year, but I think all of us slowed down," Chuck said. "She did great."

As they were leaving the race last year, Roberts was stopped multiple times and asked, "What's your secret?"

Roberts said there is no secret.