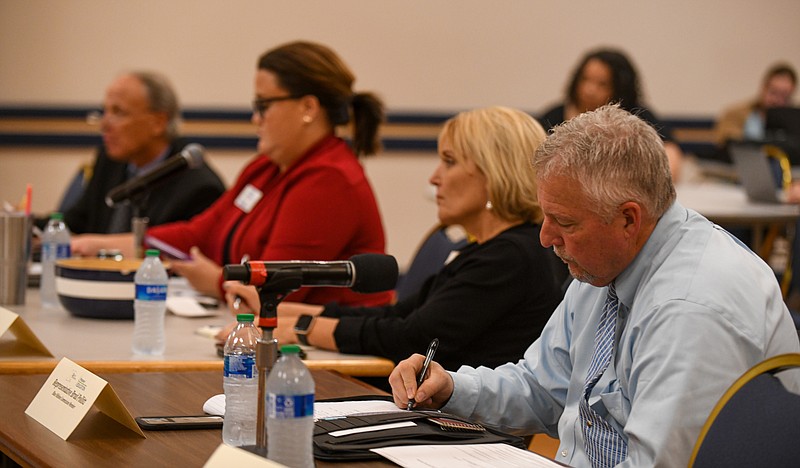 State Rep. Brad Pollitt, at right, takes notes as a teacher provides thoughts on what can be done to help keep teachers in the classroom. Pollitt was joined Wednesday, Aug. 3, 2022, for the open meeting by Missouri Commissioner of Education Margie Vandeven, Mallory McGowin and Paul Katnik, all members of the Blue Ribbon Education Commission. (Julie Smith/News Tribune photo)

Members of the Missouri Teacher Recruitment and Retention Blue Ribbon Commission finalized their recommendations to the State Board of Education on Monday, prioritizing teacher salary, stipends and benefits in their requests.

The Blue Ribbon Commission was formed to create recommendations on teacher recruitment and retention to the state board, which could in turn be forwarded to the state legislature.

Its immediate recommendations were:

• Increasing the starting teacher salary to at least $38,000

• Establishing grant funding for district Grow Your Own Programs, which are designed to recruit teachers from within the community

Some members of the commission were concerned about the amount of money on the table between the various recommendations, while others wondered if money was the most pressing issue.

"With these three (immediate) recommendations, plus the request to continue the additional funding of transportation at 75 percent, if my figures are right, that's 330 million additional dollars to public education each year and that does not include -- the figures don't address salary schedule compression issues that come with the $38,000 increase, so I just wanted to point that out," said Rep. Brad Pollitt, R-Sedalia, a commission member.

"The culture of the classroom, I believe, is a greater deterrent to teachers staying in the profession than the amount of money that they make," said member Sen. Cindy O'Laughlin, R-Shelbina.

O'Laughlin said teachers were overwhelmed by the behavioral disruptions and "total dysfunction" at times in the classroom.

Yet other members of the commission thought the plan to raise pay was a straightforward starting point.

"Just in terms of this recommendation, this feels like low-hanging fruit to me, and something that we have to do to be competitive with our region," said Sen. Lauren Arthur, D-Kansas City, adding neighboring states may already be increasing their starting salaries.

"I was in a school visit last week ... and they're launching their youth registered apprenticeship program, where these students, high school students ... told me that they were being paid $17 an hour. So if we're paying our students more for their youth registered apprenticeships than we're able to pay our teachers, we have to be able to do this," Education Commissioner Margie Vandeven said.

The committee's short-term recommendations were:

• Increasing support for teacher mental wellness, including the option to use days off for wellness reasons

The commission's long-term priorities were:

• Allowing salary supplements for teachers who gain National Board Certification

Grandel was nervous about the possible downsides of a move to offer more money to teachers in high-need positions.

She said it could be harmful to culture and climate if some teachers are paid more than others when all are "working equally hard."

The commission voted to approve the recommendations, which will be included in a document that will go before the State Board of Education in October. The commission will continue its work by offering town halls and meeting with school boards about their recommendations.