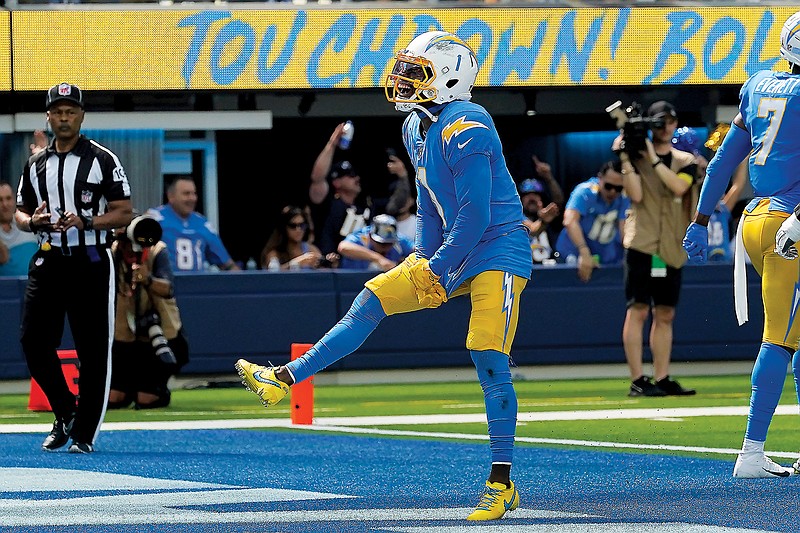 Most teams would have their offensive game plan cut in half if their top receiver was injured in the second quarter.

The Los Angeles Chargers showed they have players who can pick up the slack.

Even though Keenan Allen went out with a hamstring strain during the second quarter of Sunday’s 24-19 victory against the Las Vegas Raiders, Justin Herbert was able to remain productive. The third-year quarterback completed passes to nine players, with six having at least three receptions.

“I think it’s huge to have all of those guys and they’re interchangeable,” said Herbert, who was 26-of-34 for 279 yards and three touchdowns. “You never want to lose a player like that, but when you get guys around them that are able to step up like that, I think it’s huge for the team.”

The fact that the rest of the receiving group was able to step up is more impressive considering Mike Williams did not get his first catch until the fourth quarter.

Allen is questionable going into Thursday night’s key early season matchup against the Kansas City Chiefs. If Allen can not go, DeAndre Carter and Joshua Palmer would get most of the snaps in his absence.

Both had three receptions, but Carter provided the biggest highlights with a pair of second-quarter catches in tight coverage. His 23-yard TD late in the second quarter came between Raiders defensive backs Trevon Moehrig and Divine Deablo.

Most figured Carter was going to have an impact as a kick and punt returner, but coach Brandon Staley said Herbert developed quick chemistry with Carter.

Herbert also got plenty of help from tight end Gerald Everett, who had three receptions for 54 yards and a third-quarter touchdown.

Here are news and notes after Week 1:

• The revamped defense had six sacks and picked off Raiders QB Derek Carr three times. It also forced 18 quarterback pressures according to Next Gen Stats, which was the Chargers most since having 17 against New England in 2017.

• The running game averaged only 2.6 yards per carry and was held to no gain or a loss on 10 of 31 carries. The 10 run stuffs were the most in the league on Sunday. Austin Ekeler was stuffed on four of his 13 carries.

• OLB Khalil Mack became the third Chargers player since 1982 to post three sacks in an opener, joining Shawne Merriman (2006) and Rodney Harrison (1998). Mack also had seven quarterback pressures, five QB hits and a strip-sack in his Chargers’ debut as well as three tackles in the run game.

• WR Mike Williams had nine receptions against the Raiders in last season’s finale. On Sunday, he didn’t get his first catch until five minutes into the fourth quarter. Williams was only targeted once through the first three quarters and finished with two receptions for 10 yards. It is the sixth time in Williams’ six-year career he has been held to two or fewer catches when being on the field for at least 30 pass plays.

• CB J.C. Jackson was inactive but could make his Chargers debut Thursday night a little more than three weeks after undergoing surgery on his right ankle.

• Herbert was not sacked, the third time that’s happened in the past five games going back to last season.

• With the first two games of the season against division rivals, the Chargers needed to win at least one to feel good about their chances of winning the AFC West for the first time since 2009. They haven’t started 2-0 in 10 years, but Herbert is only the third AFC West quarterback to win his first two starts at Arrowhead Stadium.