After strong opener, Chiefs get set for Chargers 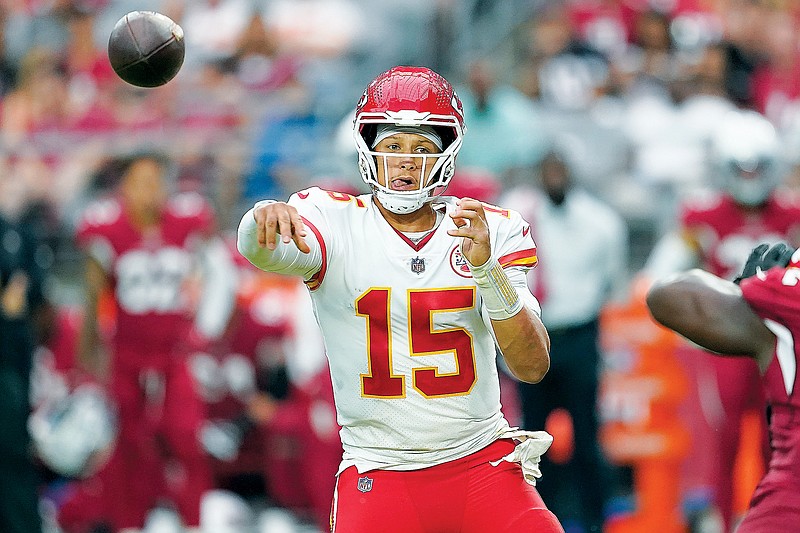 Chiefs quarterback Patrick Mahomes throws a pass during the first half of Sunday’s game against the Cardinals in Glendale, Ariz. (Associated Press)

KANSAS CITY -- Just about the only negatives for the Chiefs in their 44-21 win Sunday in Arizona came from the trainer’s tent.

Patrick Mahomes threw for 360 yards and five touchdowns without an interception, and his rebuilt wide receiver group hardly missed Tyreek Hill. The running game got humming, tight end Travis Kelce proved once more that he is an ageless wonder, and a younger and speedier defense held the Cardinals to one score until midway through the fourth quarter.

“All offseason everyone has asked us questions of what this team would look like and we’ve always believed that we were going to go out there and put on a show,” Mahomes said, “and I thought guys did that. So to go out there and win against a really good football team and to win decisively, it’s a good start.”

Excellent start. Except for the injuries.

Standout guard Trey Smith left with an ankle injury. First-round pick Trent McDuffie, who has starred throughout training camp at cornerback, strained his hamstring. Wide receiver Justin Watson had a chest injury. And big-legged kicker Harrison Butker hurt his plant ankle when he slipped on a kickoff, leaving safety Justin Reid to handle most of his duties.

None of those injuries, including an injury to Mahomes’ non-throwing wrist, are expected to be long-term problems. But the issue for the Chiefs is that they have a quick turnaround with the Los Angeles Chargers visiting Thursday night.

So even short-term problems are … well, they’re problems.

The Chiefs worked out free-agent kicker Tristan Vizcaino on Monday, a signal Butker is likely out this week. But the rest of the injury situation won’t be known until today, when Chiefs coach Andy Reid addresses reporters.

Here are news and notes after the season opener:

• It all worked. The offense. The defense. Even the special teams, where Butker kicked a 54-yard field goal with only a single step after he had hurt his ankle, and Justin Reid was 1-of-2 on extra points while showing a big leg in blasting kickoffs into the end zone.

“I didn’t keep the ball. I wasn’t worried about that,” Reid said. “At this point, I’ve always wanted to let people know that I really can kick. It’s out there now and I’m sure that everyone’s seen it so it’s going to be up there forever.”

• If you want to nitpick, the Chiefs put the ball on the ground five times, including twice by JuJu Smith-Schuster, who also lost their only fumble. But two of those fumbles came from backup quarterback Chad Henne and third-string running back Isaih Pacheco, the rookie who atoned for the gaffe by leading the Chiefs with 62 yards rushing and a touchdown.

• Chiefs linebacker Nick Bolton proved during his rookie year he was a tackling machine. But along with a team-high 10 tackles Sunday, Bolton also showed that he could get everyone in the right place after taking over the defensive headset from linebacker Anthony Hitchens.

• Defensive end Frank Clark showed up to camp slimmed down and ready for a big season, but it got off to a slow start. He missed time with an illness last week and only managed one tackle while playing just more than half the defensive snaps.

• Nick Allegretti played well once Smith left with an ankle injury, and the Chiefs have some depth at cornerback if McDuffie is out for a while. The biggest question heading into Thursday night is who will handle kicking duties after Butker’s injury.

• The Chiefs have won eight consecutive season openers going back to the 2015 season. The trick now is to avoid a letdown like last year, when they followed up an opening win against Cleveland with losses to the Ravens and Chargers.

• The Chargers visit Arrowhead Stadium in the first of the NFL’s exclusive Thursday night games on Amazon Prime.