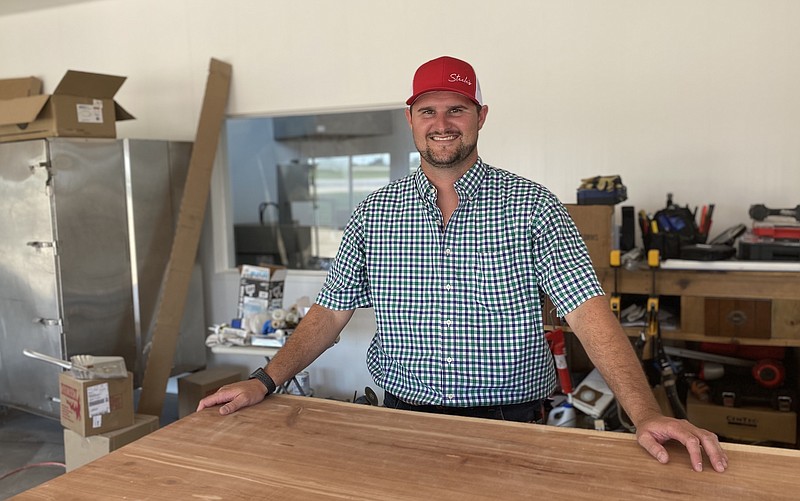 Cameron Gerber/News Tribune Steele's Fine Custom Meats owner Scott Steele poses behind the counter at his new butcher shop, which will be located in the former Zesto Drive-In on Jefferson Street.

The former Zesto Drive-In South closed its doors around a year ago when its owners retired, stating they would entertain offers for a new business to take over the building.

Scott Steele, a second-generation meat processor with experience all over the country, is set to open his new butcher shop in the space in the coming weeks. He said he fell for the Jefferson City community when he moved here with his fiancee, who is from the area, after a stint in the corporate world, and that the shop would be a longstanding dream come true.

"It's something I've wanted to do for 10 years now. I worked at a butcher shop in college, and we did something very similar to what I hope to do here," he said. "My fiancee and I decided Jefferson City is where we wanted to be, and we started talking about it in January. By May, we'd bought the building. Everything just kind of fell into place for this."

The shop, which is still undergoing its remodel, is expected to open at the end of October. It will feature a deli case with meats and cheese, as well as shelving for dry goods and spices and a reach-in freezer similar to what grocery stores feature.

The former ice cream spot also includes a walk-in cooler, which Steele said would be useful for storage when products came in.

The Zesto signs went down last week, with Steele's new logo taking over the sign out front. Steele said he was grateful for the building and its legacy as a Jefferson City landmark. He said the shop was along the perfect road for his business.

As he gets the building ready for its next chapter, Steele said his main focus will be working with customers and their families to provide high-quality meats and stellar service.

Steele's Fine Custom Meats will be located at 1730 Jefferson St. Follow the business on Facebook for the latest updates.