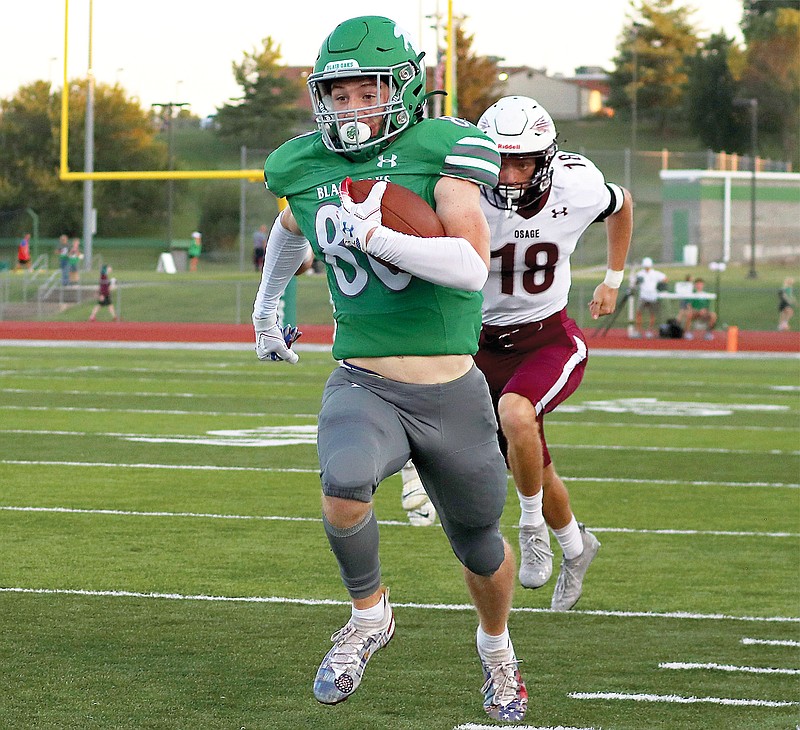 Blair Oaks wide receiver Nick Closser runs with the ball down the field for a touchdown past School of the Osage defensive back Max Cook during Friday night’s game at the Falcon Athletic Complex in Wardsville. (Kate Cassady/News Tribune)

WARDSVILLE -- When the Blair Oaks football coaching staff scouted School of the Osage’s first two games this season, they noticed the Indians lined up with four players on the defensive line.

Deep down, the staff knew the Falcons might see a different look from Osage on Friday night. And they did.

“Welcome to the life of Blair Oaks football,” Falcons coach Ted LePage said. “We practiced for a 40 front, that’s what they showed all year, and then they came out in a 30 front.”

Luckily, Blair Oaks had a game plan in case the Indians showed either front.

As the Osage defense put seven players in the box, quarterback Dylan Hair threw for 399 yards and six touchdowns, as the Falcons dominated the Indians for a 56-13 win at the Falcon Athletic Complex in the Tri-County Conference opener for both teams.

Blair Oaks showed off its passing game on the first play from scrimmage. The play started as a fumbled snap, but Hair picked up the loose ball, avoided a sack and threw the ball to Nick Closser near the line of scrimmage.

Closser scrambled for a 57-yard touchdown run along the left sideline. Nolan Laughlin made the extra point and the Falcons led 7-0 just 22 seconds into the game.

“Dylan knocked it down, picked it up and calmly threw it out there,” LePage said. “Nick did the rest. We had a great block out of Joey Wilde, and boom, he was gone.”

Through the Falcons’ first two games, Hair had completed just 12-of-23 passes for 337 yards. He was 14-of-15 against the Indians, and the one miss was an interception snagged by Osage’s Landon Childs midway through the first quarter.

“We really stressed to him this week -- and to our whole offense -- that we were 52 percent passing coming into the game, and we are way more efficient than that,” LePage said.

But because Hair rushed for 520 yards in the Falcons’ first two games, the Indians wanted to contain Blair Oaks’ dual-threat quarterback.

“I kind of anticipated that they would take some risks and try to stop the run game,” LePage said. “So we really worked on the passing game this week.”

On the Falcons’ next scoring drive, Hair was alone in the backfield and threw a 24-yard touchdown pass to Closser. After the interception, Blair Oaks scored on each of its next five possessions.

Alec Wieberg caught three touchdown passes in the second quarter for the Falcons.

His first touchdown was a 41-yard strike downfield early in the second quarter.

On the next two touchdown passes of 35 and 30 yards, Wieberg beat his defender in one-on-one matchups.

“They didn’t have anyone in the middle of the field, so we went for it,” Wieberg said. “… As long as you can beat your one man, you’re good.”

Only three Blair Oaks players had at least one reception through the first two games. Hair completed at least one pass to seven players against Osage.

“That’s going to add to our repertoire and give us more tools in our tool belt,” LePage said.

Blair Oaks also had two rushing touchdowns in the first half, as Hayden Lackman scored from 31 yards out and Brady Kerperin crossed the goal line from 2 yards out to put the Falcons well ahead at 49-7 at halftime.

But while LePage was pleased with the offensive production, he was frustrated by the Falcons’ three turnovers.

“I was really disappointed with our ball security tonight,” LePage said. “We had three turnovers, and that is not the way we play football. I addressed that right away after the game.

“If you want to be a good football team, you can’t give the ball away.”

Osage only scored off one of those turnovers, as Aidan Williams had a 1-yard touchdown rush late in the fourth quarter.

The Indian’s first touchdown came on a 43-yard run by quarterback Konner Vaughn on the opening play of the second quarter. It was one of two Osage plays that went for 20-plus yards.

“That touchdown run was a great scheme by them,” LePage said. “They caught us in a little bit of a coverage mishap.”

Osage rushed for just 116 yards against Blair Oaks, averaging 3.4 yard per carry. Williams gained 100-plus yards in each of the Indians’ first two games, but he was held to 13 yards Friday.

“Osage’s offensive line is no joke,” LePage said. “I feel like we were winning a lot of those battles one-on-one.”

Falcon linebacker Holden Brand had an interception early in the second quarter for his second takeaway of the season.

“We’re excited about this one,” LePage said. “Last year, they ran the ball up and down the field against us. I already told our players this is one we had marked on our calendars.”