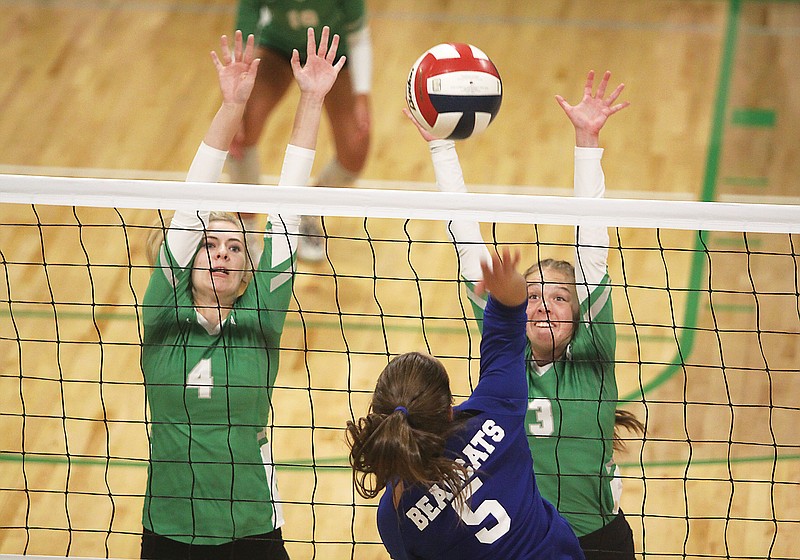 WARDSVILLE -- Tuesday night is what the Blair Oaks Lady Falcons envisioned when they added the Hermann Lady Bearcats to their schedule last season.

The fact it was a matchup between two defending state champions was a huge bonus.

“It gives us a true test at the beginning of the season, it gives us a heads up on things we still need to do better. And we have plenty of time to work on those things.”

“The girls were ready for this game,” Distler said. “It’s something we’ve been looking forward to, them coming here.”

Blair Oaks never trailed in the first set, scoring the first three points of the match and leading by as many as 10 points at 16-6 after a service ace from Anna Wekenborg.

It was only one of five aces for the Lady Falcons, but they constantly put pressure on the Lady Bearcats’ serve-receive.

“We’ve been trying to push to make sure we get a tough serve,” Distler said. “Hermann’s a great passing team, so I knew we weren’t going to get a whole lot of aces tonight, but we wanted to make sure we were putting pressure on them, not giving them an easy ball.”

Hermann led 17-10 in the second set after back-to-back kills from Quin Winkelmann and Jill Rood. Blair Oaks answered right back with a 7-0 run to tie the score on a kill by Bailey Braun.

The Lady Falcons serve for five set points in the second set, but the Lady Bearcats fought off each one of them, overcoming a 21-24 deficit.

“We kept fighting,” Distler said. “I know Hermann snuck it out at the end, but we bounced back.”

“We settled in there,” Distler said. “The nerves and the excitement of the game got to them early. That definitely caused some early hitting errors, but we did a much better job keeping the ball in play later.”

Blair Oaks had six kills on the final eight points of the third set: three from Bax, two from Wekenborg and one from Aubrey Hardwick.

The fourth set was the closest set from start to finish, as neither team led by more than three points.

“That kind of set is why we want Hermann to come here,” Distler said.

Holly Heldt opened the set with a kill and a block for Hermann. Heldt posted seven of her team-high 21 kills in the final set.

“Holly is a great player,” Distler said. “She was the player we were focused on there, and she had a really great night.”

There were 11 ties in the fourth set, but after the score was tied at 23, at Hermann attack error and a kill by Braun set the match for the Lady Falcons.

Bax had a double-double of 23 kills and 14 digs to lead Blair Oaks.

“Autumn is a heck of a player,” Distler said. “Knowing she’s on our court at any given moment is great for us, because we know she’ll deliver.”

Braun also had a double-double with 13 kills and 18 digs, while Hardwick had nine kills and Wekenborg added six kills.

“Bailey has had a heck of a start to the season,” Distler said. “Anna was really aggressive at the net, too, which let Aubrey and Bailey get into one-on-one situations.”

Juergensmeyer had 45 assists and two aces, while Tayla Prenger finished with 18 digs.

Blair Oaks (7-1) hosts Boonville on Thursday. The freshman match starts at 5 p.m., followed by the JV and varsity matches.

“I couldn’t ask for a better start from the girls,” Distler said.