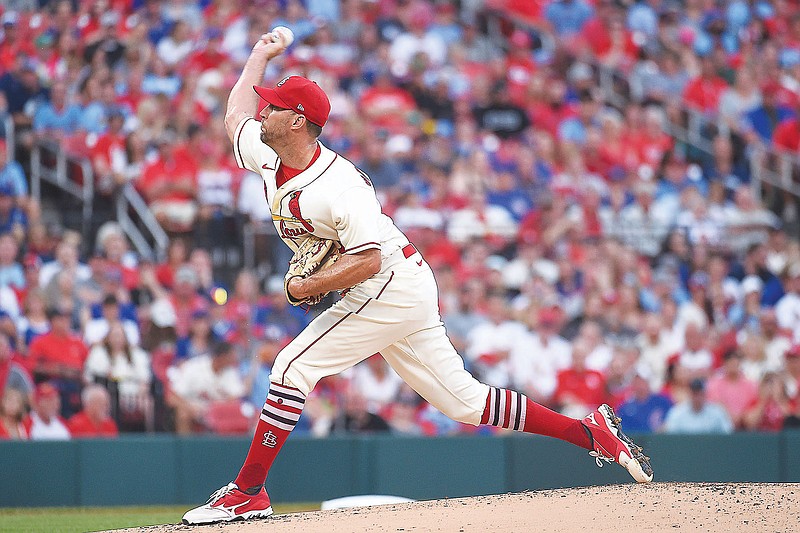 I feel the description “national treasure” is overused, especially when it comes to sports.

It’s not that I think it’s disrespectful to the Nicolas Cage movie that premiered in 2004. It’s just how can hundreds of people all be considered national treasures? Where do you draw the line? What are the criteria?

So when I use the phrase myself, I’m not messing around.

My “national treasure” moment occurred last Sunday night while waiting for a baseball game to start.

I was sitting at my desk in the News Tribune office, writing a high school team’s season preview story, when I glanced up at the TV and noticed an ESPN camera crew was set up behind Adam Wainwright in the St. Louis Cardinals bullpen.

Usually we have the TV muted in the office, so at first I just assumed ESPN was getting a close-up of Wainwright warming up before his 384th career MLB start. But when I looked up again a few seconds later, another camera angle showed Wainwright talking.

I quickly grabbed the remote control and turned the volume up.

As it turns out, Wainwright was mic’d up as he was throwing wamup pitches to Yadier Molina prior to ESPN’s “Sunday Night Baseball” game.

“I’ll tell you, in my earlier years, I never would have agreed to do this,” Wainwright said. “But so many times, I get asked about my warmup routine.”

Wainwright discussed the differences in his routine from the average pitcher. He doesn’t spend as much time playing long toss and warming up. He only pitches off the mound and focuses on keeping the ball down in the strike zone.

He emphasized how a bad warmup session should not dictate what you do in a game.

He said when he came up through the Braves minor league system, he would throw two bullpen sessions between starts instead of just one.

He noted how a pitcher’s routine should never become superstition, something I know I was definitely guilty of as a teenager.

“I’m hoping this right here brings a little excitement to our game of baseball, because I love when they do this kind of stuff in the NFL,” Wainwright said.

By the time the 14-minute pregame session was finished, it became clear to me. Wainwright was giving a free tutorial to a national audience, something we don’t see every day.

He also delivered some funny lines.

“All you pitchers at home are laughing at me, too, because I’m grunting throwing 88 (mph). Give it time.”

“If that cutter right there stays right there, (the Atlanta Braves are) going to be in trouble.”

The Cardinals are paying him millions of dollars to pitch, but when he retires, Wainwright has guaranteed he’ll get paid millions to be a color commentator on baseball broadcasts.

At 41 years old -- and with another win Saturday night -- Wainwright has shown his stuff is good enough to pitch at least another season, if he so desires.

But as long as he sticks around baseball, he’ll always be a national treasure.