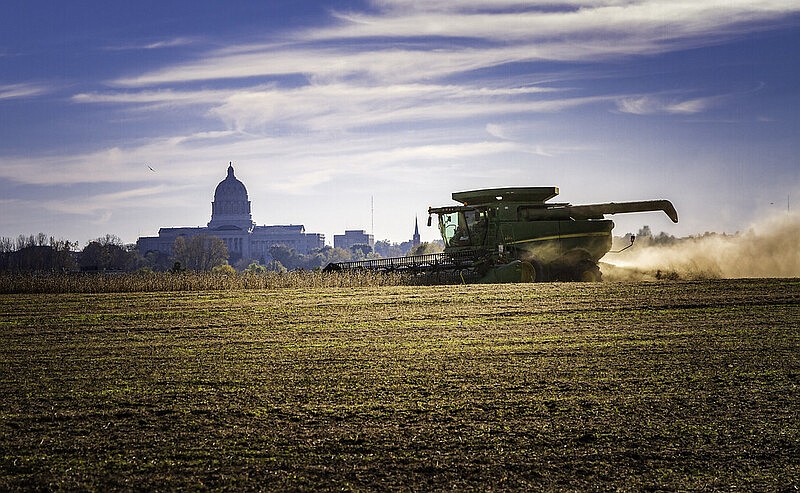 A grain farmer harvests near the State Capitol.

A federal report released Thursday shows Missouri ranks at or near the bottom nationally in terms of processing Medicaid applications in the federally-permitted time.

The report, issued by the Centers for Medicare and Medicaid Services, contains the first data covering the period since Missouri expanded Medicaid eligibility late last year. CMS used to release the reports annually but will now publish them on a quarterly basis.

In March, Missouri had the highest portion of Medicaid applications processed in more than 45 days among the 47 states reporting data, and was second only to Arkansas the previous month.

The federal government requires states to process applications within 45 days.

Roughly four in every five Medicaid applications in Missouri took longer than 45 days to process during this period, eight times the national average.

A year earlier, before the state expanded Medicaid, only around 2 percent of applications took longer than 45 days to process.

Wait times for Medicaid applicants in Missouri and Arkansas far outpaced every other state in the report.

The state regularly releases monthly average wait times, but only the federal reports provide distributional data, which reveals the issue was not one of a few outlier applications: The majority of Missouri applications were processed in excess of the federal time limit.

The average period to determine eligibility for an application in Missouri was 81 days in February 2022 and 83 days in March 2022.

The average wait time went on to peak at 115 days in June. Before Medicaid eligibility was finally expanded to include low-income adults last year, the average processing time in June was just eight days.

The long wait times have put the state on CMS's radar.

In early 2022, CMS began working with the state to identify strategies to reduce processing times and high backlogs -- at that point, the new report shows, the state was among the worst nationally.

By May, the federal government wasn't satisfied with Missouri's progress. CMS formally requested the state produce a mitigation plan in May, after identifying "multiple issues related to Missouri's timely processing of applications."

Last week, during a briefing with reporters, Kim Evans, director of Missouri's Family Support Division, which administers Medicaid in Missouri, downplayed the significance of the federal intervention.

"This is something that is normal," Evans said. "It is not unique to Missouri, and it's not something we had to do because Missouri was just so far behind that we couldn't save this."

The state has until Sept. 30 to bring its average times within the guidelines. If it falls short of the plan laid out by CMS, the federal government could implement even more stringent compliance measures. Eventually, Missouri could face financial sanctions.

In a statement, DSS spokesperson Caitlin Whaley said the department is "well on its way to meeting the goals of the mitigation plan," and noted the backlog has shrunk to 18,666 applications as of Friday morning, down from its peak at 70,000 in January. Whaley did not provide an updated average processing time, which is the metric the mitigation plan uses, and which stood around 90 days last week.

"It is not a secret that processing times for MO HealthNet were higher than normal at the start of the year," Whaley said, citing the expansion of Medicaid late last year and corresponding open enrollment season which increased the number of applications substantially.

"Thanks to the hard work of our incredible FSD staff, the agency has made incredible progress to decrease the number of pending applications," Whaley said.

For applicants, a months-long wait time for Medicaid can prove untenable, causing them to delay necessary care and forego purchasing their prescriptions, said Tricia Brooks, research professor at Georgetown University's Center for Children and Families.