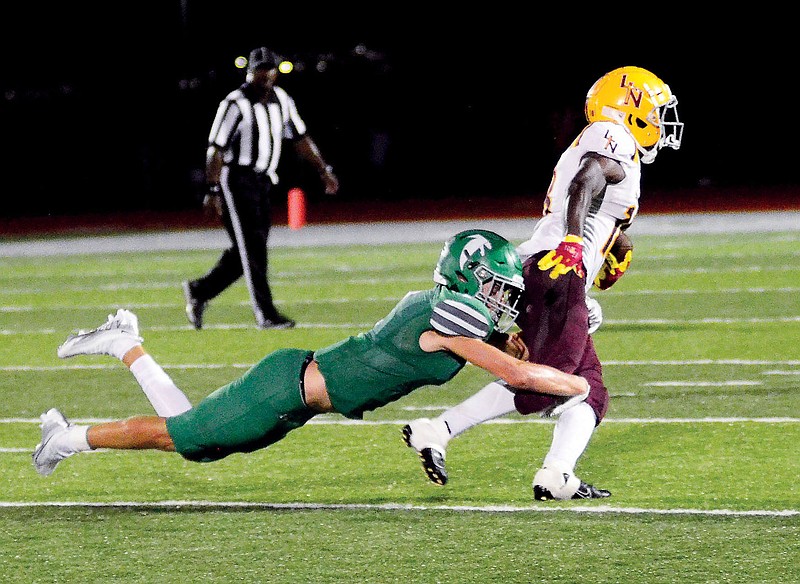 WARDSVILLE -- It was a defensive domination for the Blair Oaks Falcons.

The Lutheran North Crusaders totaled 227 yards of offense, but they didn’t lead to any points Friday night. The Blair Oaks defense forced three turnovers, as well as four turnovers on downs, to pave the way to a 35-0 win in the state-ranked battle at the Falcon Athletic Complex.

“We gave up some yards, but the one thing we did on defense tonight that we haven’t done in the past 14 games with these guys is pursue the football with intent,” Blair Oaks coach Ted LePage said. “We gave up some big plays, but we were always pursuing the football.”

Neither offense scored in the first half, but the Falcons held a 7-0 halftime lead at intermission.

Lutheran North quarterback Dakarri Hollins was being chased in the backfield and fumbled the ball near midfield. Blair Oaks linebacker Holden Brand scooped up the loose ball and returned it 44 yards for a touchdown. Nolan Laughlin added the extra point to make it 7-0 with :21 left in the first quarter.

The Blair Oaks offense was limited to three first downs and just 66 yards in the first half, but the Falcons were still leading with 24 minutes to play.

“I was as nervous as a long-tailed cat in a room full of rocking chairs,” LePage said. “I didn’t have a good feeling, because we weren’t moving the ball.”

Blair Oaks moved the ball in the second half.

The defense came up with its second takeaway on the second play of the second half, when linebacker Brady Kerperin recovered another fumble for the Falcons.

Two plays later, Dylan Hair scored on a 17-yard run to give the Falcons a 14-0 advantage just 1:06 into the third quarter.

“Boy, that was a huge momentum change,” LePage said.

On the offensive side of the ball, Hair was just getting warmed up.

Lutheran North held the Blair Oaks quarterback to 11 yards on 11 carries in the first half. Hair averaged 30.3 yards per carry in the second half.

Blair Oaks scored on every possession in the third quarter. On the Falcons’ next drive, Hair faked a handoff to running back Hayden Lackman and ran it into the end zone for a 45-yard score. The extra-point attempt was wide left, but the Falcons extended their lead to 20-0 with 7:06 left in the quarter.

After a Lutheran North punt, Blair Oaks took over on its own 17-yard line. With an empty backfield, Hair kept the ball and ran up the middle for an 83-yard touchdown run.

The Crusaders threatened to score on their next possession, but cornerback Jake Hagner intercepted a pass in the end zone.

Five plays later, Hair faked a handoff and ran up the middle untouched for a 58-yard run. He also scored on the 2-point conversion run, pushing the Blair Oaks lead to 35-0 with 1:47 to go in the third quarter.

Hair finished the game with 18 carries for 223 yards and all four offensive touchdowns.

“We went back to option football,” LePage said, as Hair has rushed for 520 yards through the Falcons’ first two games.

Lutheran North had another turnover on downs to start the fourth quarter. With a running clock, Blair Oaks held onto the football for the final 10:21, as the Crusaders were shut out for the first time in more than a decade.

Lackman added 14 carries for 60 yards for the Falcons. Hair completed 4-of-9 passes for 90 yards, as Blair Oaks totaled 391 yards of offense without a turnover.

Blair Oaks (2-0), ranked No. 2 in Class 2, begins Tri-County Conference play next Friday when it hosts School of the Osage. Kickoff is at 7 p.m

“We’ll have to stop the run in the conference,” LePage said. “We’ve taken the run game away from both teams we’ve faced. We’re getting better, and this is going to be one more chance to go in the film room, look at ourselves and say, ‘Hey, let’s get better.’”