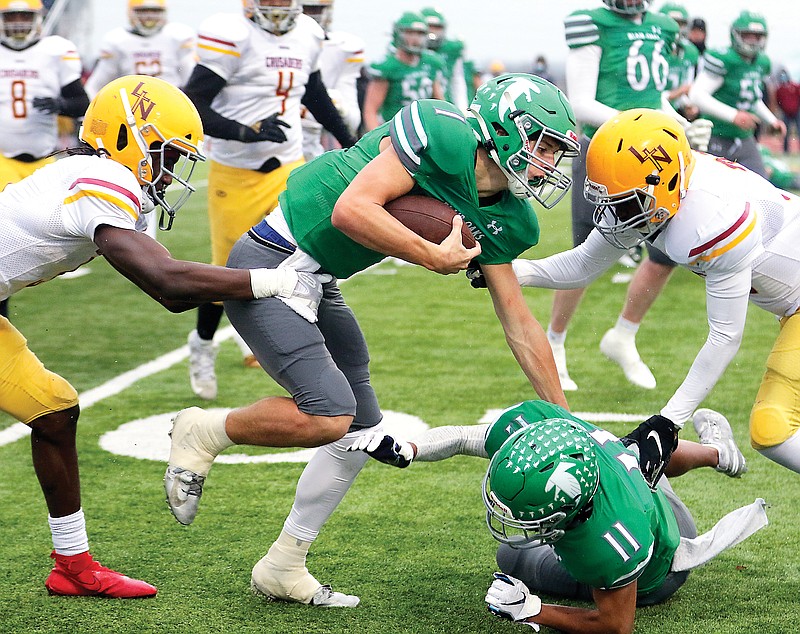 WARDSVILLE -- The Blair Oaks Falcons only get two non-conference football games each season, so they want to make them count.

Maryville, a program that has appeared in five state championship games since 2012, was the season opener for the Falcons.

When Blair Oaks had an opening for its Week 2 opponent, it sought to fill it with another powerhouse program.

After playing each other in the 2018 and 2020 state playoffs, Blair Oaks and Lutheran North will meet each other for the first time in the regular season tonight at the Falcon Athletic Complex. Kickoff is at 7 p.m.

Like Blair Oaks, Lutheran North had an impressive win in its season opener. Last Friday, the Crusaders won 27-6 against Hazelwood Central, the program’s first win against a Class 6 school.

“I think it’s imperative that we see good competition early,” LePage said. “You go into games wanting to win them all, but you want to get better.”

Blair Oaks won both playoff meetings at home against Lutheran North en route to state titles. In 2018, the Falcons finished strong in the fourth quarter to pull out a 48-21 victory in the Class 2 state semifinals. In 2020, they overcame a halftime deficit to cruise to a 44-9 win in the Class 3 state quarterfinals.

“Their quarterback’s a sophomore, but he doesn’t look like it and he doesn’t act like it,” LePage said. “He’s very mobile, but he is very accurate.

“I’d say the previous two times we played them, their quarterbacks have been really, really good football players, but I don’t know if they’ve had a young man, that we’ve played against, that can throw the ball as effectively as this young man.”

The only negative against Hollis’ debut were three interceptions.

“He made a couple of mistakes, but those mistakes never hurt his team,” LePage said.

Senior running back Ricky Dixon led the Crusaders in the backfield with 19 carries for 119 yards and a touchdown against Hazelwood Central. However, according to a story on STL High School Sports, Dixon was injured late in the game and left the field in an ambulance.

“He’ll run through you first, then he has the breakaway speed,” LePage said. “He’s kind of like the heartbeat of the team, he’s one of their few seniors.”

At wide receiver, Hollis has several targets. Among them are seniors Jonathan Van Hook and Vance Gross and sophomore Trey Bass.

“Their receivers do a great job of climbing the ladder and making contested catches,” LePage said.

The Crusaders will operate out of the shotgun with a running back and four wideouts.

“They’re still a power football team,” LePage said. “They’ve gotten away from the wing-T philosophy, as far as being under center. They’re going to look to run it, but if you’re going to give them the throw, they aren’t afraid to spin it.”

Lutheran North has multiple players starting on both sides of the line. Sophomore Jaydin Little-Simms (6-foot-2, 295 pounds) has caught LePage’s attention on film, saying he may the best defensive lineman the Falcons face this season.

Little-Simms had three tackles for loss and a pair of sacks in the opener.

“He just dominated the line of scrimmage,” LePage said.

“I’m really impressed with their offensive and defensive lines,” LePage said. “They really have done a good job in those areas of coaching them up.”

“When you can dominate with your front four, and they bring an extra guy,” LePage said. “You’re so worried about the front four, then that guy comes in.”

LePage said the Falcons will have to double-team Little-Simms.

“If you don’t, he’s going to be in your backfield all night,” he said.

Gross will play in the defensive secondary, along with Van Hook and junior Jordan Carter.

“They forced them to be one-dimensional, and with that, they don’t come up and get in your face, they like to set their defensive backs back and then they just break on the ball,” LePage said.

The Blair Oaks defense came away with three interceptions last Friday in a 54-42 win against Maryville.

“We had a chance to have more, that’s the scary thing,” LePage said. “We really did a good job of tracking the ball.”

The Falcon offense has been focusing on ball control this week in practice. Blair Oaks received the opening kick against Maryville and controlled the ball for nearly half the first quarter before scoring a touchdown.

“We really want to make sure we keep the ball secure and get 4 yards every play.”

Notes: Blair Oaks and Lutheran North are both ranked in this week’s initial Missouri Media Rankings of the season. Blair Oaks, which dropped a class this season, is ranked No. 2 in Class 2 behind Lamar, which received all 10 first-place votes. Lutheran North is ranked No. 4 in Class 3 behind Lutheran: St. Charles, St. Pius X: Kansas City and Cardinal Ritter. … Instead of a home-and-home series, Blair Oaks will host Lutheran North again next season. … The Crusaders boast one of the most difficult strengths of schedule in Class 3. Next week, Lutheran North hosts Class 5 No. 4 Francis Howelll. Then, for the final four weeks of the regular season, the Crusaders play Class 5 No. 7 MICDS, Class 3 No. 10 Maryville, Class 3 No. 1 Lutheran: St. Charles and Class 4 No. 1 St. Mary’s: St. Louis. … Blair Oaks running back Eli Luckett announced Thursday on Twitter he suffered a torn ACL during last month’s Jamboree. He said he had surgery Monday and will miss the 2022 season. … Zack Prenger, a wide receiver and defensive back, is expected to return to the Blair Oaks lineup tonight. He did not play against Maryville due to illness.