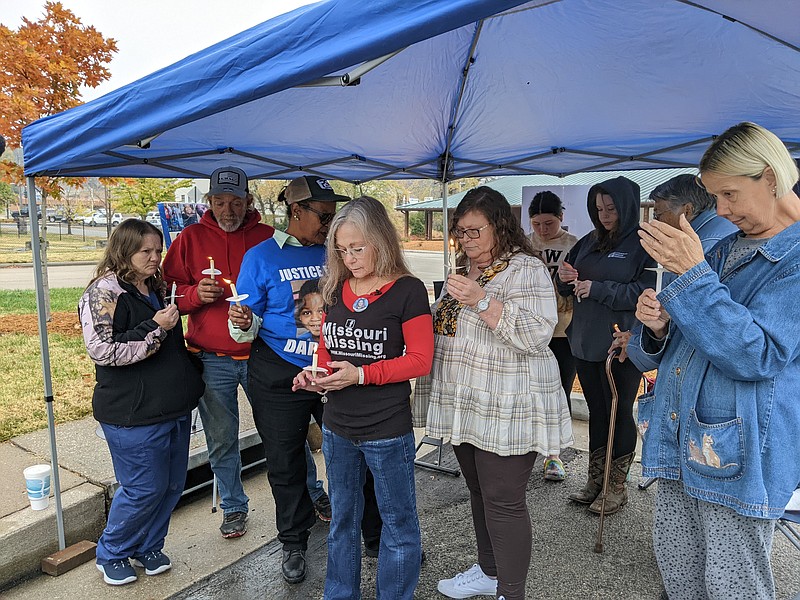 Ryan Pivoney/News Tribune photo: About a dozen community members gather for a candlelight vigil celebrating the life of Darnell Gray Sunday, Oct. 30, 2022, at Washington Park in Jefferson City. Darnell, a 4-year-old boy, was killed in 2018. His caretaker is awaiting trial for charges connected to his death.

It's been four years since 4-year-old Darnell Gray's body was found after a nearly week-long search by authorities and community members.

Mary Williams-Coley and most of the people at Sunday's vigil have returned to honor Darnell's memory annually since his death. Several, including Williams-Coley and Kathy Mueller, also attend each court proceeding involving the case.

"The thing is, it's a blessing that out of it we became a family," said Williams-Coley, who was instrumental in the 2018 search. "We became a better community because we probably wouldn't have even crossed paths. We crossed paths here."

Darnell was found dead in October 2018 -- a week after his caretaker, Quatavia Givens, reported him missing.

Givens was charged with child abuse and second-degree murder in October 2019 in connection with Darnell's death, and has since been indicted on charges of first-degree murder, child abuse and neglect, endangering the welfare of a child and abandonment of a corpse. Her trial is set for March 2023.

Williams-Coley said she hoped Sunday's vigil, meant to celebrate Darnell's life, would inspire hope and show that the boy was loved.

"That lady didn't love him, but we love him," she said. "We're here to show our love for him and stand in the gap for his family that's in Chicago that can't get here."

The group shared their love for Darnell, how much each other's support has meant, memories from the community rallying around the search and their vision of justice for the child.

Marianne Asher-Chapman, executive director and co-founder of Missouri Missing, has stayed involved with the case since she first participated in the search in 2018. Her organization, which consists of four volunteers and four board members, helped establish the command center and search resources in Washington Park.

Asher-Chapman, whose daughter went missing 19 years ago, said Darnell's death struck close to her heart because it was "such a tragedy."

Williams-Coley and Mueller manned the search command center in Washington Park in 2018. They accepted donations, directed volunteers and coordinated with law enforcement.

Businesses up and down Missouri Boulevard, churches and community organizations offered to help with manpower, food and prayers, Williams-Coley said. People offering to lend assistance with Darnell's search came from as far as Springfield, she recalled.

John Summers was involved with the search in 2018 and has been present for the vigil every year since. The search for Darnell occurred just a few years after Summers had searched around Fulton for one of his own family members who went missing.

"When it comes to a kid, everybody should join in and not just leave it just for the law," he said. "All the community should join in with something like that, but you can't get nobody to do what the good Lord expects out of people."

When asked about the drop-off from hundreds being involved with the search to just a dozen attending his memorial on Sunday, Williams-Coley said she would stand alone in the park if nobody else stood with her.

"This group here, we're going to stand together," she added. "We have become a family."

Earlier this month, Williams-Coley and others dedicated a memorial stone for Darnell at Washington Park. The red-brick stone sits at the base of a young sugar maple tree near the park entrance.

Williams-Coley said the tree is a fitting symbol of new life, growth and beauty.

"We can be able to look at this and we can at least ... have a little peace at heart until we get justice for him," she said.