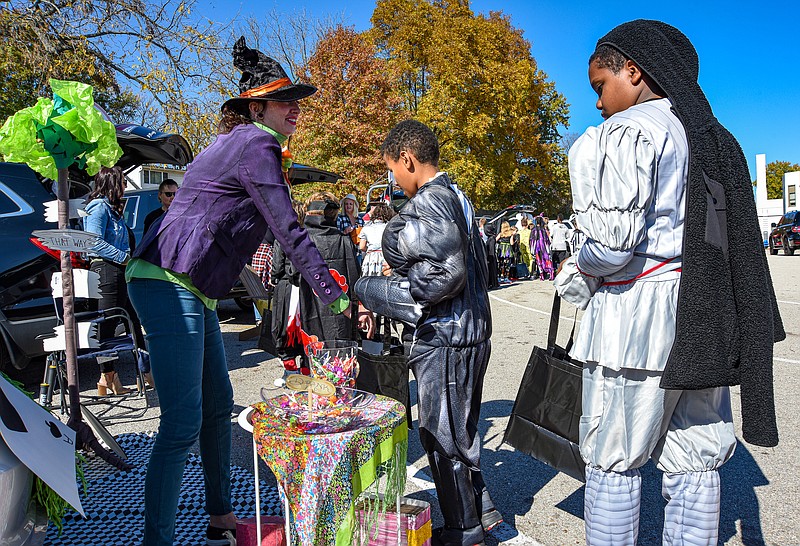 Julie Smith/News Tribune A costumed Magen Sebastian hands candy to Chayse Abbott, middle, and Aaron Robinson, both of who are fifth graders at West School. Parents wore costumes and decorated their vehicles to hand out candy and trunk or treat on the school parking lot.

Nineteen cars and a tent lined the pavement outside West Elementary School on Friday, as around 300 students trickled out the doors to join the line for the Trunk-or-Treat.

While Trunk-or-Treat events have been growing in popularity, this was West Elementary's first, and it brought plenty of volunteers and Halloween spirit.

Students from kindergarten to fifth grade passed through in all sorts of costumes -- superheroes, witches, butterflies, pirates, princesses, Star Wars characters, Pokemon and even a couple of hazmat suits. They picked up a bag from Jefferson Bank at the start of the line, then walked by each trunk.

Each car was decorated for the occasion.

Cindy Schnieders and Laura Luebbert had a spooky trunk decorated with spiders for Art 101. The building is located right across the street, Schnieders said, so it's like "neighborhood" trick-or-treating for them.

District employees Julie Wankum and Jessica Smith were handing out books donated by Scholastic in addition to candy at their trunk, which was decorated with "If you Give a Mouse a Cookie."

Nearby, amid the bottles adorning a truck bed "apothecary," a little black dog named Midnight popped her head up.

"You have to find the thing that doesn't belong in this," said a teacher, gesturing at the apothecary display. "Do you see it?"

The students searched for a moment, eyes darting back and forth, before spotting Midnight.

"A doggy!" shouted the children as they pointed.

There were two pirate-themed vehicles side by side, but the fact that both Faith Lutheran Church and mothers of West students dressed as pirates was simply a happy accident. Julie Martin of Faith Lutheran said she hoped to see some of the same kids at their Trunk-or-Treat on Monday night.

There were representatives from the Human Resources Department at Jefferson City Schools Central Office, Cub Scouts, and the "West School Grannies."

"We come in once a month and do an activity with the kindergarten class," said Charlotte Dudenhoeffer, one of the "grannies."

After all the students had passed through, they waved goodbye and shouted thank you to the volunteers before heading back inside to finish the school day. 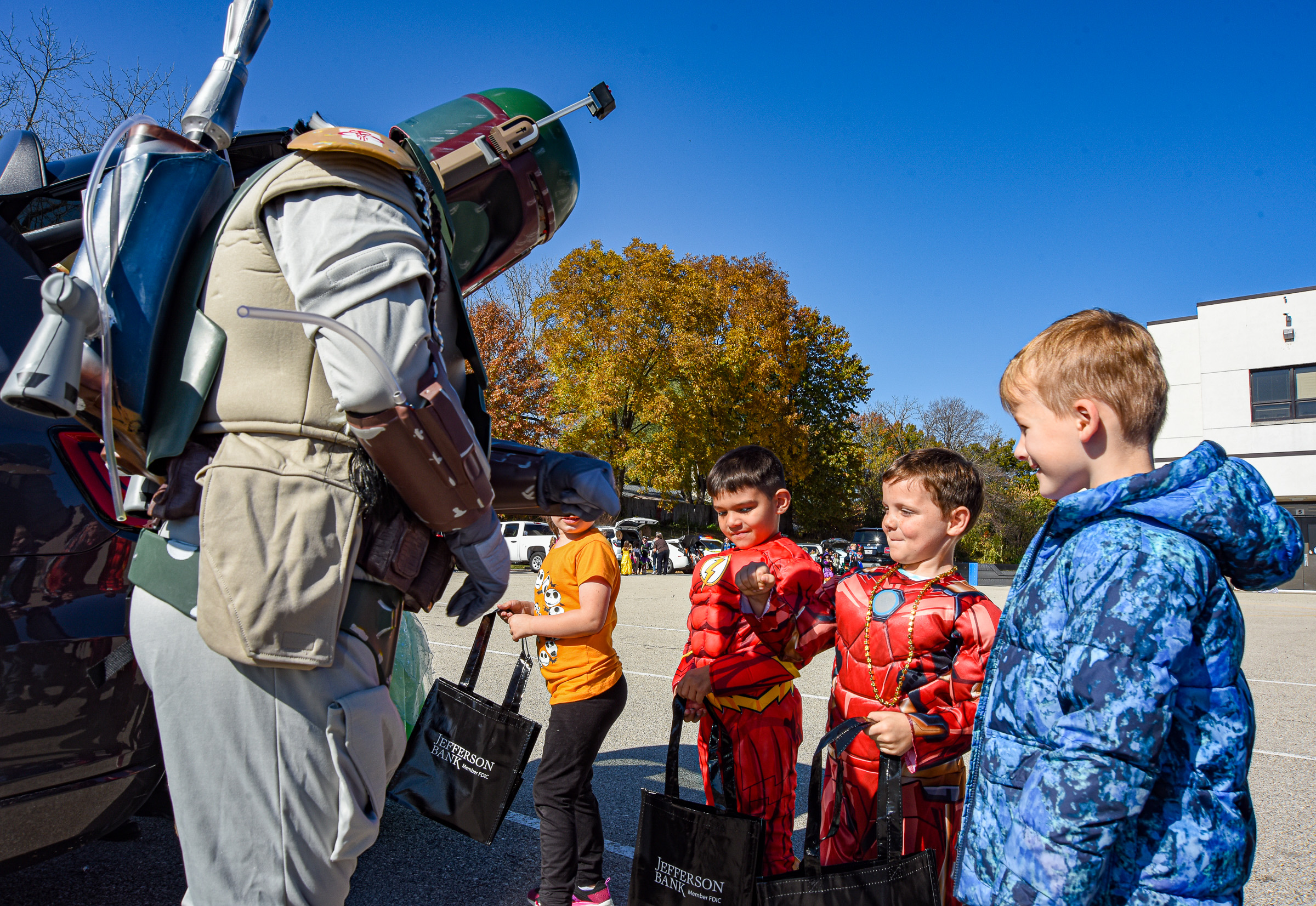 Julie Smith/News Tribune The Mandalorian-costumed parent was one of the most popular characters in Friday's trunk or treat at West School. Students waited excitedly in line and several glad handed him, as Itxaro Padilla-Adams, at left, Blake Fifer and Kalen Schubert, at right, are shown here doing, while they waited with empty bags for their sweet reward.

Julie Smith/News Tribune West School third grader, Violet Summers, came to school Friday ready for the trunk or treat on the playground in the afternoon. Several parents and staff from Jefferson City School District took part in the activity which saw a number of parents dress in costume and decorate their vehicle's trunk to hand out candy to students who filed through a line.