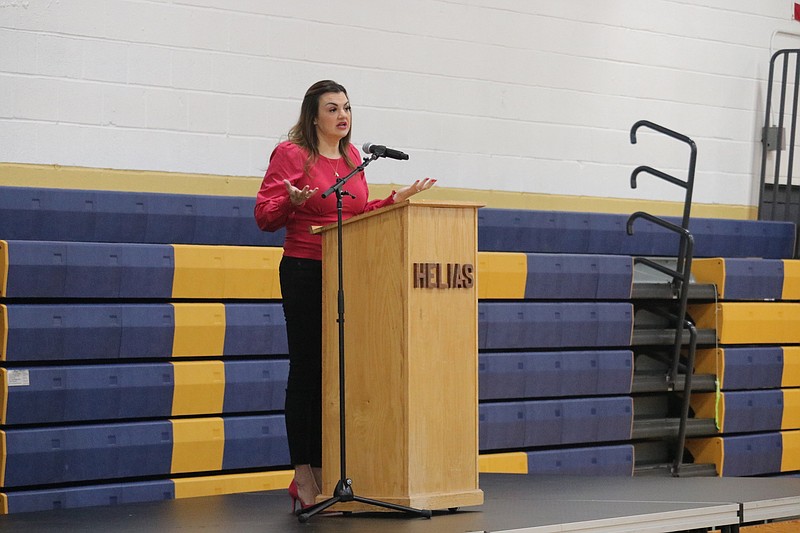 Johnson is the author of "Unplanned," a book that chronicles her experience as a Planned Parenthood employee and her decision to leave that organization as well as her journey to becoming a pro-life activist.

"Unplanned" was also adapted into a movie, and some Helias students had seen clips from the movie in their theology classes leading up to Johnson's visit.

Johnson is also the founder of And Then There Were None, a ministry that helps abortion clinic workers looking to transition out of their jobs.

Johnson spoke at Vitae in Jefferson City this spring, where she told supporters that "a war" over abortion issues was coming. Vitae is a global nonprofit that seeks to intervene and reach women considering abortion.

"I just think it's good for our students to hear the sincerity and honesty behind her message. It's very real," said Zach Rockers, director of campus ministry.

Johnson told students she regrets her involvement in what she estimates as 22,000 abortions over the years. She also regrets the two abortions she herself had.

"My life, this story, this is not the story you want," Johnson said.

She also encouraged those listening to be bold.

"Some of you are going off to college soon, some of you are graduating, and you're about to be out of this bubble of protection that you've been in, and guys, one thing I can encourage you in, you need to know where you stand on these issues," she said.

She told them to research abortion procedures and figure out where they stand.

"I promise you, you're not pro-choice. Know where you stand on these issues," she said.

"And if you are pro-life, be proud to be pro-life. Be proud to stand up for the vulnerable among you. Don't be shy about your faith. Don't ever feel like you have to hide who you are," Johnson said.