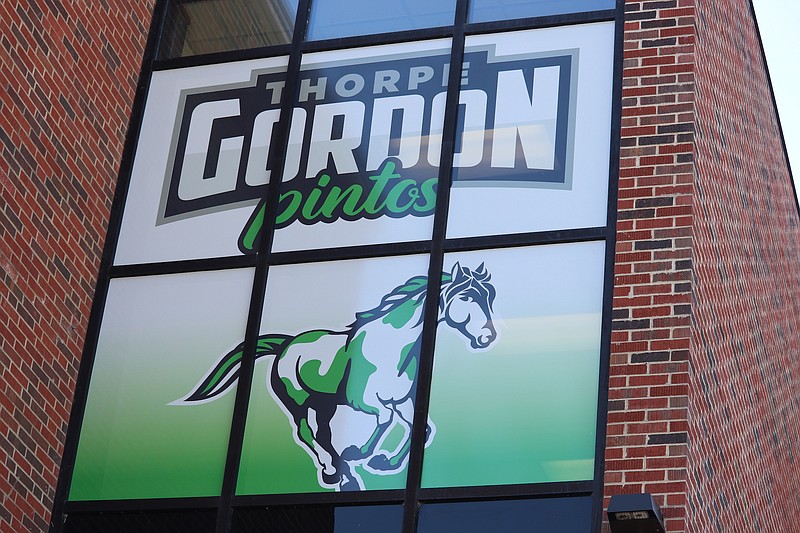 Anna Campbell/News Tribune photo: Thorpe Gordon Elementary School in Jefferson City has undergone a number of renovations, including the addition of new logo decals throughout the building. In the next round of renovations, the district is making plans to add spaces that will turn it into a STEM school.

Superintendent Bryan McGraw mentioned the possibility at last month's board meeting, and on Thursday, the school board signed off on an initial plan to get the process started for the Science, Technology, Engineering and Math school.

Troy Hogg, new assistant superintendent of elementary education, was a part of launching the STEM school in Columbia, Benton STEM Elementary School, in 2010.

STEM doesn't mean students don't experience art and music -- it means STEM is integrated into those subjects in creative ways, Hogg said. For instance, students could use recycled materials to create art, examine the math and engineering that goes into sculpture and architecture, use digital software to create music, or create a new instrument.

"And we wanted to emphasize the fact that we might be the STEM school in the district, but we're not the only school where STEM activities are taking place," said Thorpe Gordon Elementary School Principal Delora Scaggs. "Kids are still getting STEM activities in their education in all the buildings; it's just that that will be the focus here."

Added Hogg: "It's really important to remember that the curriculum and the standards are the same. We're not going to change the standards or teach anything different in Thorpe Gordon STEM than we would do in any other elementary school in the district, but the way you approach the instruction might look different. So more problem-solving, more problem-based learning, for example, more critical thinking. What I've always said to our kids is, 'We really want you to think like a scientist and a mathematician, which means you ask lots of questions and you wonder, and you build on your own curiosity to find answers.'"

Hogg would also like to bring community members who work in STEM into the school so students can understand who they are and what they do.

"I think it's important to remember, too, that in STEM fields, even after all these years where there's been a focus, there's still an under-representation of minorities and women in STEM careers, so especially putting that in front of all of our kids, so they have that exposure and they can have that opportunity," Hogg said.

The student population of Thorpe Gordon is around 75 percent African American, Scaggs estimated, and the other 25 percent is mostly white, along with some Hispanic and Asian students.

Thorpe Gordon is the ideal candidate partly because of where it is, school officials said.

"I think we're ideal for the STEM school because we have a prime location to partner with a lot of different (institutions) in our own community," Scaggs said, pointing out the close proximity of Lincoln University, Nichols Career Center and Jefferson City High School.

"That community involvement is really critical to the success of a STEM school," Hogg said. "Because not everyone has expertise in science, technology, engineering and math, right? But you have a lot of people in the community who do, who have those as their professions. Those are their jobs. So to be able to pull those individuals in and partner with the students and the staff and the school is just a phenomenal opportunity."

Thorpe Gordon also presents a ready candidate because it is currently being renovated.

Thorpe Gordon has already undergone several renovations, including the addition of flex spaces for individual student learning and playground improvements, along with cosmetic updates like Thorpe Gordon Pinto logos throughout the building.

To turn it into a STEM school, the district will work within the existing renovation budget to add a STEM lab where students can work on big projects, such as growing plants, coding robots, or designing and engineering a machine. The benefit of a dedicated lab space is that students wouldn't have to put their projects away or take them apart as they might in a general education classroom.

Hogg said the district was also exploring options for a gardening space or solar panels outside.

The district will also need to offer staff professional development training to equip them to teach in a STEM school.

The attendance boundaries will remain as they are and current Thorpe Gordon students will retain their spots at Thorpe Gordon, Hogg said.

Eventually, the district could implement some sort of lottery system to allow students in other boundary areas to attend, but Hogg said that is likely a conversation to have after the building is up and running as a STEM school. It would also depend on building capacity.

"I think for the most part from my experience as well, most families who might want to come to Thorpe Gordon usually want to come tour first or see the building first ... so it'll be a good opportunity for them to be able to come see it before they decide that's what they want," Hogg said.

At Thursday's meeting, the board gave an "enthusiastic endorsement" to moving forward with the plan for a STEM school. Board members also expressed their confidence in Scaggs as a leader for the school.

Scaggs has started a Thorpe Gordon staff STEM committee, which will be learning from other STEM schools.

She said the school will host talks with the community to gather support and feedback by having a sort of round-robin engagement event. Parents and community members could sit in groups, each with a question at their table to gather feedback to share with the committee and district administration.

Scaggs said the district wanted to make sure it started right with its first STEM school, so community input would be an important piece of the puzzle.