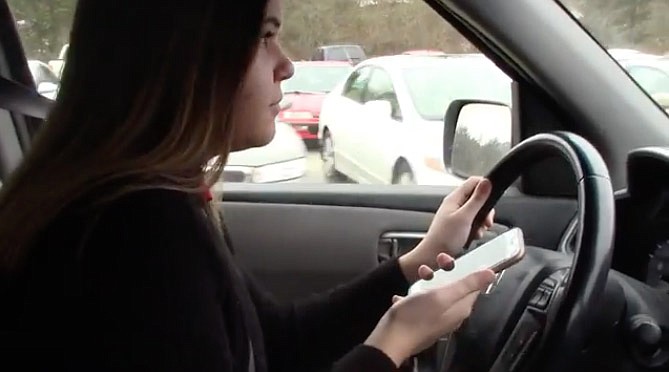 Above is a screenshot from the winning video in the News Tribune's 2020 It Can Wait Contest by Madelyn Goodson, which illustrates why motorists should not drive distracted.

In recognition of National Teen Driver Safety Week, taking place this week, the Governors Highway Safety Association (GHSA) announced its partnership with General Motors (GM) to provide a total of $210,000 to seven states. The purpose of the grant is to combat the prevalent and preventable problem of distracted driving, according to a GHSA news release.

The Missouri Department of Transportation (MoDOT) will be using its $30,000 chunk of the grant funding to broaden its "Buckle Up Phone Down" program, said Jon Nelson, assistant to the state highway safety and traffic engineer at MoDOT.

MoDOT will focus its work on three distinct groups: elementary school-age children, high school students and employers, Nelson said. The campaign will encourage changing the culture to one of "phones down while driving" through a social norming approach, according to the release.

Missouri is one of two states in the country without a general ban on distracted driving. A ban does exist for people under the age of 21 in Missouri. But distracted driving isn't just a young driver problem. Approximately 70 percent of drivers using cell phones in Missouri traffic crashes were 22 years of age or older, according to data from MoDOT.

Though this grant will wholly focus on public education as opposed to advocacy for a hands-free law, Nick Chabarria, spokesperson for Missouri AAA, is still optimistic. A member of the Hands Free Coalition, AAA worked with MoDOT on filing the application for the grant. Chabarria sees this grant as an opportunity to start laying the groundwork for getting a law through the Legislature.

"Even if we did have a law, it's not going to change everybody's opinions and actions right away. There's going to be a need for public education about the issue. We're glad to have the funding to be able to expand outreach here in our state," he said.

Chabarria emphasized that public education will only help with the coalition's legislative efforts.

Every year, Missouri sees bills to ban distracted driving -- this year saw nine -- but legislative roadblocks have stymied them all. This year, SB 713 sponsored by Sen. Greg Razer, D-Kansas City, saw the first bill to make it out of committee in four years. It, too, fell to the same fate of its predecessors.

According to data from the Missouri Hands Free Coalition, other states that have passed hands-free laws in recent years have seen reductions in fatality rates by 15-20 percent.

Adrian Nicholas, communications coordinator for GHSA said, "We know that strong laws are important for getting people to put down their phones. However, we also know that when it comes to changing the culture so that distracted driving is socially unacceptable it takes a comprehensive approach -- we can't just legislate, enforce, educate or build our way out of this problem."

In 2021, 1,016 individuals were killed in Missouri traffic crashes, amounting to the highest number of lives lost on Missouri roadways since 2006, according to the Missouri Department of Transportation's strategic highway safety plan, called Show Me Zero.

During the past five years, cell-phone related crashes in Missouri have increased by 30 percent, according to the report.

"Missouri is barely treading water in terms of suppressing the number of deaths occurring on the state's roadways," the report said.

Within the past decade, the state has received two unfavorable reports from safety advocacy groups focused on public policy and awareness. In 2017, Missouri received an "F" from the National Safety Council and an overall road safety ranking of 49 out of 51.

In a presentation at Missouri's 2022 Highway Safety and Traffic Conference in late September, Feldman told a captive audience of first responders, law enforcement officers and administrative support staff that, "The story of distracted driving is the story of hypocrisy. Until we face our own hypocrisy, we're not going to change the numbers."

Feldman said both public education and policy advocacy are worthy causes. "It's a tough call. But at the end of the day, we have to make sure whatever we're doing is going to tangibly change the way we drive and the way we think about driving."

Nelson said, "Missourians are going to have to decide whether this is something we need in our state to keep our citizens safer and if enough Missourians believe that, 'I'm confident the state legislature will follow suit.'"