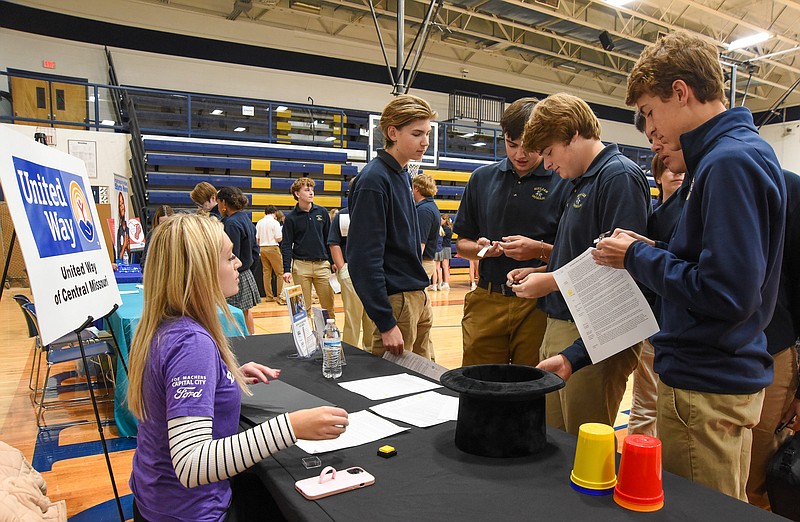 Helias Catholic High School is putting an emphasis on forging connections between the community and its students this year.

Students could visit organizations like Catholic Charities, United Way, Capital City Court Appointed Special Advocates and JC Room at the Inn. They could also pick up items along the way, like sunglasses, shirts and pens, and they could stop by the Freedom Service Dog Teams booth, where they were encouraged to pet a furry gray dog named Scruffy.

"A lot of them are connected through United Way or Catholic Charities, so we made a lot of those connections through those two larger umbrella organizations, and then a few of them we just reached out to because we had a parent suggest them or we had someone bring their name to us, and we reached out to them," Helias Service Coordinator William Schatte said.

"I really want a summer service activity, so I thought it'd be really cool to kind of get a little taste of what's there," she said.

Steinlage is also involved in Life Runners and Student Council, where she earns service hours during the year.

"I'm trying to strive for around 500 service hours. Right now I'm about 200, so I'm trying to think of a good summer program that I could go to, because I also have two jobs after school, so it's kind of hard to do stuff," she said.

"I just started off helping my mom in her classroom and coaching volleyball, but then I went on mission trips through the school and that was so much fun. At that point I didn't even need the hours, but I just wanted to try something new," she added.

Sophomore Zoe Cheng said she had visited several booths, and was most interested in those that offered a chance to help people, like Special Olympics.

She was also excited about the Jefferson City Boys & Girls Club, which she said provides children a chance to feel included and a place to go.

She hopes to work in a career someday that helps people, too.

The students came in 30-minute shifts, and those who made four meaningful connections could turn in their stamped sheet for a chance at a $10 gift card.

"And then hopefully they'll find an organization that sparks their interest and they can engage with," Schatte said. 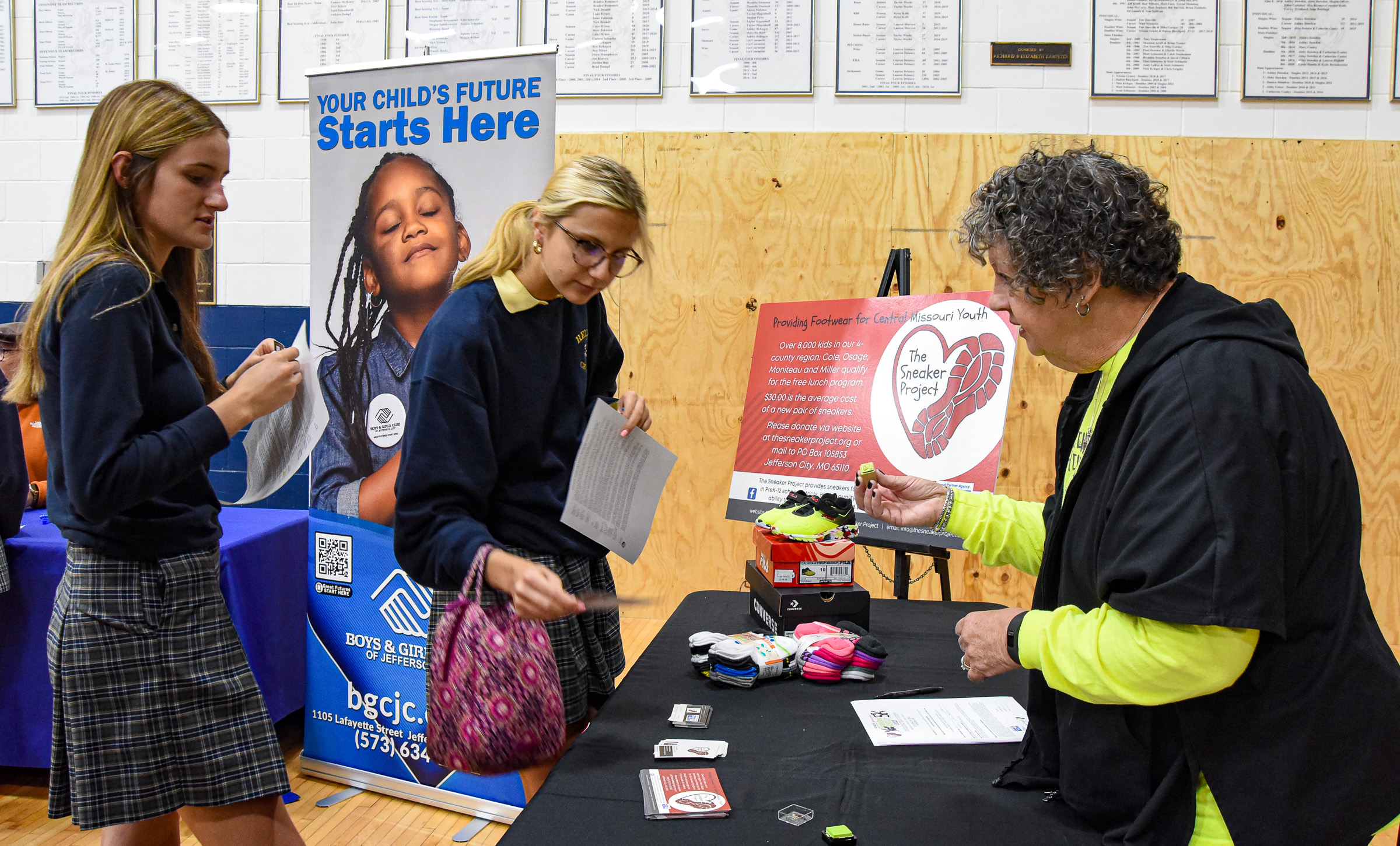 Julie Smith/News Tribune photo: Theresa McClellan, right, explains to Stella Struttmann, left, and Victoria Hentges what The Sneaker Project is and how volunteers can help the organization. McClellan, who serves as executive director, was one of more than a dozen local non-profit agencies at Helias Catholic High School Wednesday to answer questions about what they do and recruiting volunteers. 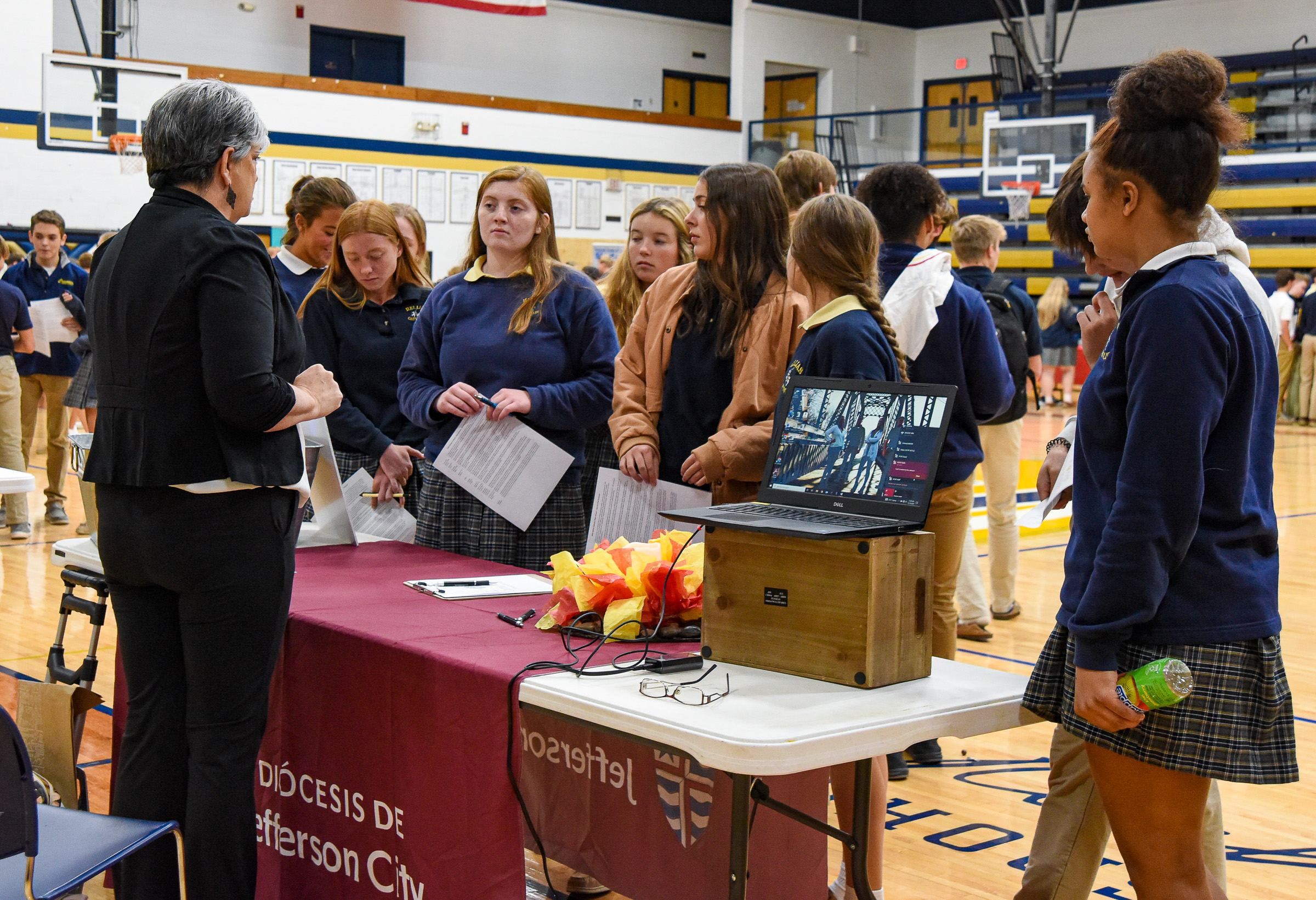 Julie Smith/News Tribune photo: Kris Hartman, left, events coordinator for the Jefferson City Diocese, talks with students about volunteer opportunities through the diocese, particularly Camp Lolek, a summer camp for junior high studentd that is focused on the joy of Christ, faith and community. 2022 was the first year of the camp for which several volunteers are needed. 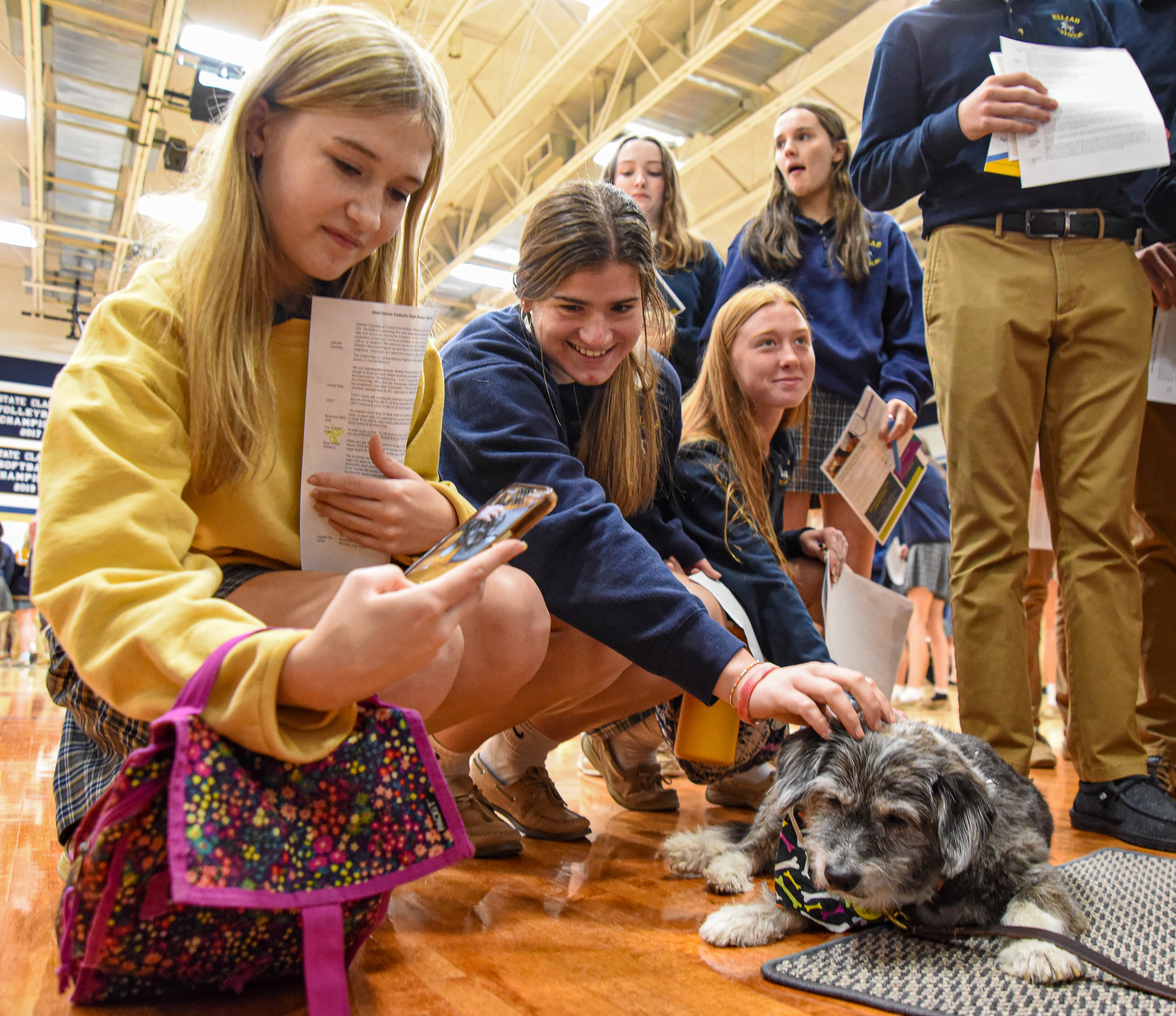 Julie Smith/News Tribune photo: Scruffy, the 14-year-old service dog, was on the receiving end of a lot of attention in the way of petting and "oh look, a cute dog" Wednesday during a service fair at Helias Catholic High School. More than a dozen non-profit organizations were on hand for the event which was a way for these agencies and organiations to meet with young people and encourage them to volunteer. Shown with Scruffy are seniors: Sarah Case, Madi May and Danielle Buker. 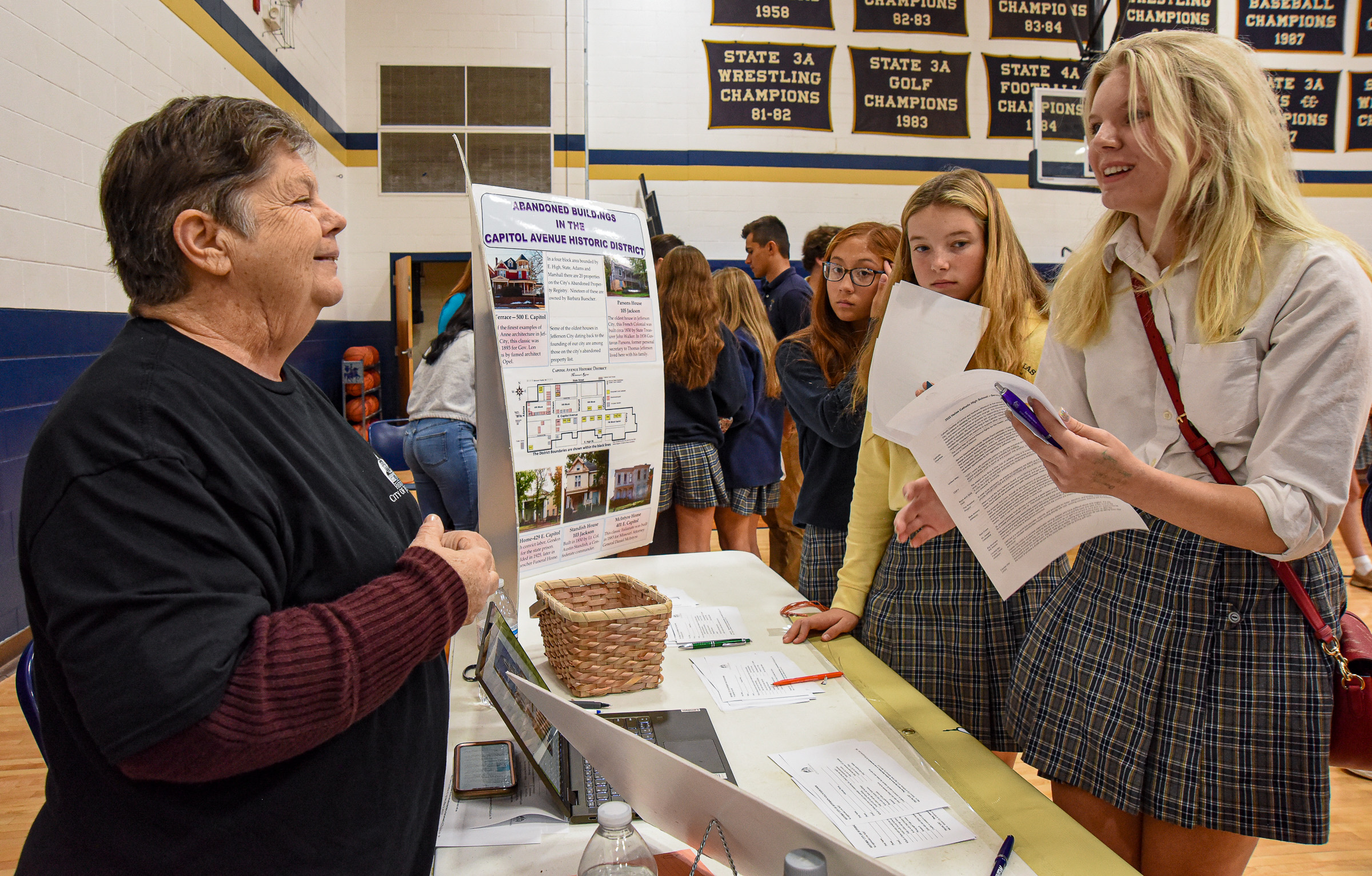 Julie Smith/News Tribune photo: Donna Deetz, left, president of the Historic City of Jefferson, explains to Sophia Johnson about the research opportunities available through the organization. Johnson is a junior at Helias Catholic High School and very interested in historical references, archiving history and more and found there could be volunteer opportunities for her at the HCJ. HCJ and more than a dozen other non-profit agencies and organizations were at Helias Wednesday for the service fair, which was an one-stop shop for students to learn about volunteer opportunities available to them.