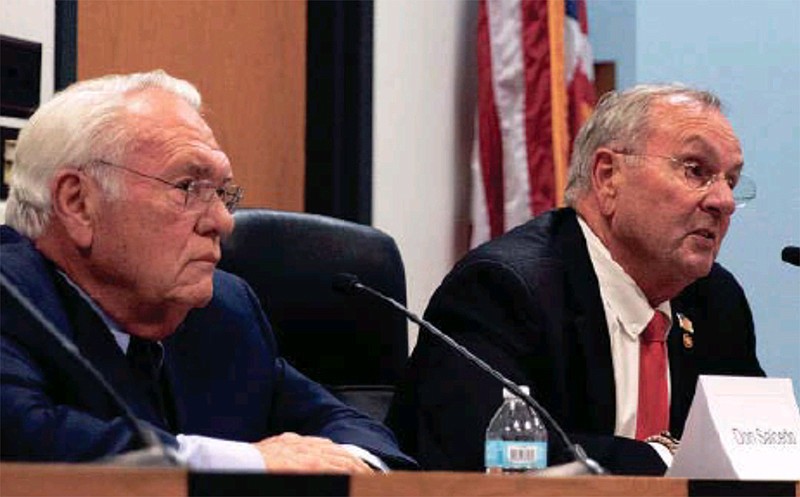 Candidates for the Missouri House of Representatives District 60 seat don't see eye-to-eye on much, including education, infrastructure, the initiative petition process and other issues.

Incumbent Rep. Dave Griffith, a Republican, squared off with his Democratic challenger, J. Don Salcedo, in a forum hosted by the Jefferson City News Tribune on Wednesday evening at City Hall. The general election is Nov. 8.

Griffith said it is not a double standard. He said the Legislature holds public hearings and debates bills on two chamber floors.

"(Lawmakers) look at what we feel like is best for everyone," Griffith said. "One thing we did not address in this last session is the initiative petition. With the initiative process we have right now in the state of Missouri ... if you have 450,000 signatures, you can change the Constitution of Missouri. For me, if we're going to change the Constitution, we need to be very thoughtful about how we do that."

He added that in the House and Senate, there is time to bring people in to discuss the bills.

"I think we've done a good job of putting something before the people that they're going to vote on," Griffith added. "They'll be able to vote yes or no, whether they like the change."

Salcedo disagreed. He said he didn't think Republicans had done a very good job at all. There are five measures on the Nov. 8 ballot, only one of which (recreational marijuana) came out of the initiative process.

"I'm going to recommend that my family vote against all five of them," Salcedo said. "Because it's just filled with Republican language that defeats the very purpose that they say they're doing."

Get the input of the public before putting something on the ballot, he said. He said Missouri residents voted several years ago not to have a conceal-and-carry law, but the Republican Legislature passed such a law anyway. He added Missourians went through the initiative process to get Medicaid expansion on the ballot, and Republicans refused to fund it before courts forced them to do so.

He added Missouri lags behind other states in enrolling people in Medicaid. Salcedo said it gives the impression the Legislature, which didn't want it in the first place, is slowing the enrollment process so expansion doesn't work.

Griffith has served two terms (four years) in the House of Representatives. He is a former U.S. Army Green Beret and acted as executive director for the American Red Cross for six years. He served on the City Council for Jefferson City and spent 23 years working for a television station in several roles.

Salcedo, a retiree, spent his 40-year career in education -- as a teacher and as a National Education Association Organizer.

Early during the forum, News Tribune Editor Gary Castor asked the candidates if they would be willing to increase spending on mental health services to help reduce the risk of suicides among veterans and the general population.

During the past summer, Griffith chaired the House Interim Committee on Veterans Mental Health and Suicide. During several of the hearings, the committee heard from the family of Matt Brown, a longtime Springfield police officer and member of the Missouri Army National Guard. Brown had served more than two decades in each of the services before he died of suicide about a year ago.

The committee heard "very compelling stories," Griffith said. It learned the Missouri Department of Mental Health has one person whose job is to prevent veteran suicides.

"Mental issues are forefront on (suicide deaths)," he said. "We've got to address those -- (post traumatic stress disorder), substance abuse, being able to provide more resources to our Mental Health Department in the form of (full time employees) is something we need to address. It's something that's been talked about."

The military can do things for veterans that the private sector cannot do, Griffith said. It can assign a person in a given area, platoon or squad who can be a suicide-prevention officers.

He added he would like to explore ways of assigning a suicide-prevention co-worker within some of the area's large manufacturing plants and other industries.

"We can learn from the best practices of what our military's been doing, and transpose those to the private sector, and start to make headway in veteran suicide deaths," Griffith said.

He said lessons learned over the summer will carry into the Legislature next year.

Salcedo said a start would be putting more money into the Department of Mental Health. He added that looking at successful programs in other states would be helpful.

"For example, red flag laws. If you have a veteran who is a danger to himself or others -- other states have found that there seems to be a correlation between removing access to the firearm from the veteran resulted in reduced deaths," he said. "Other states around Missouri have reduced veteran deaths."

Missouri doesn't have any of those gun-safety laws, he continued.

On infrastructure, Salcedo said the state has "kicked the can down the road," despite the Legislature passing increased gas taxes in 2021. Griffith voted for the bill, which is intended to help pay costs of repairing and improving the state's roads, highways and bridges. Gov. Mike Parson signed Senate Bill 262 in 2021, enacting an additional 12.5 cents per gallon tax on motor fuels. The first of incremental additions to the tax (2.5 cents per year) went into effect in October that year. Exemptions and refunds may be claimed by taxpayers if they can prove their gas tax has been paid and no refund has previously been issued.

However, as soon as it passed, some Republican lawmakers vowed to try to overturn the tax. The Legislature anticipates several laws aimed at overturning SB 262 to be posted in December. Griffith said he stands behind his decision to support the bill.

A pillar of his campaigns has been to repair Missouri's roads. There are parts of Interstate 70, where it may be unsafe to pass another vehicle because of the condition of the road. The Legislature dedicated a large portion of CARES Act funding Missouri received during the past session to infrastructure, building and repairing bridges and roads, Griffith said.

The Missouri Department of Transportation is doing the best it can with the money it has, he said. Missouri has almost twice the roads and bridges as other states, but continues to have one of the lowest gas taxes in the nation.

"Now our roads and bridges are crumbling and in need of repair and replacement," Salcedo said.

Missouri had a historic year in education funding during the past session, Griffith said. He pointed out lawmakers spent $3.6 billion in fully funding the Foundation Formula.

The formula, passed in 2005, established a minimum that should be spent to educate the average student for a year. The formula is weighted to reflect that some students need additional help.

Griffith also said the state set aside $328 million to pay for the transportation needs for the state of Missouri. It spent $37.1 million, he said, on the Career Ladder -- a voluntary salary program in which teachers may earn additional pay based upon the number of hours they work outside contracted time.

The state passed $5.1 billion for education this year.

"So, I think we've done a good job with that," Griffith said. "The rhetoric that I hear from the other side of the aisle, that we're not taking care of education -- education is third of our budget."

Too many schools have shorted the school week to four days a week, Salcedo said.

"Republicans have been failing education for years in this state," he said.

Facts prove it, he said. Missouri, Salcedo said, is 49th in the amount of money the state applies to education, 47th in what it does for early childhood education and 45th in the nation on average teacher salary.

View the forum video in the player embedded above, or at https://youtu.be/-hU_IBFdod8?t=3330.