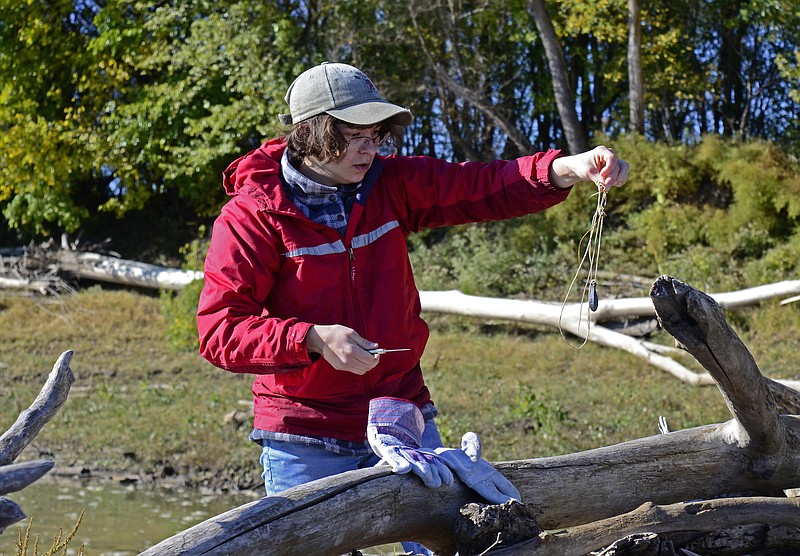 Eileen Wisniowicz/News Tribune photo: Hollie Burrows picks up a piece of trash on Saturday, Oct. 15, 2022, at the Missouri River in Jefferson City. Burrows had to cut out the piece of rope that was stuck in driftwood.

Lex and his mother, Liz du Plessis, residents of Columbia, had to be at Wilson's Serenity Point and Noren Access in North Jefferson City early in the morning.

They were among more than 200 people who volunteered to help with the cleanup of a 10-mile stretch of the Missouri River.

After spending a couple hours cleaning along one of its banks, he was tired, Lex said.

It was Lex's first time on the river.

"I found this little pink butterfly barrette," Lex said. "I'm putting it in the competition for 'Most Fashionable' item."

He said he was surprised by how much stuff was accumulating along the river.

"There was a lot of Styrofoam. And, I hear that's really bad for the environment," he said.

Missouri River Relief -- whose mission is to engage people and communities along the river in exploration, enjoyment, restoration and care of the river through hands-on cleanups, education and recreation -- organized Saturday's event. Learn more about the nonprofit at https://riverrelief.org.

The group grew out of an effort by Mid-Missourians who recognized the need for engaged stewardship of the river and the desire of communities to take part in watershed solutions, its site states. The first cleanup site was a based in Easley -- west of Ashland and across the river from Plowboy Bend Conservation Area.

The nonprofit tries to create games to help entertain volunteers. Among the games it offered Saturday were competitions to see the strangest/coolest things volunteers found while cleaning the shorelines. In addition to the "Most Fashionable Trash," Missouri River Relief offered competitions for "Most Useful," "Weirdest Trash," "Most Likely to be Used as a Weapon," "Best Animal Find," and "Message in a Bottle Award."

Saturday's event, which was based at Noren Access, allowed the crews to spread out and clean about 10 miles of shoreline, going 5 miles up and down the river.

There is a large effort that goes behind each of the cleanups, according to Kevin Tosie, Missouri River Relief operations manager, who said staff arrive at the headquarters site about three days in advance to begin scouting the spots where volunteers will be able to remove trash from the river. For large events, such as Saturday's, River Relief may have more than 40 people involved in its operations.

"We're based out of Columbia, and our roots are kind of deepest here," Tosie said. "So we do have the biggest turnouts here."

On Saturday, a crew of experienced parking attendants organized parking for volunteers as they arrived, to be certain no vehicles were blocked in. More than 80 vehicles, including boat trailers, support trucks and volunteers' transportation were required to get everybody to the site.

Another crew checked in volunteers, while others waited to provide orientation. At the first station for volunteers (once they checked in), Joe Engeln and others gave volunteers some history lessons on the river, the access point and even the May 22, 2019, tornado that passed across the river near the access.

Engeln explained the Missouri is the longest river in the United States, starting in the Rocky Mountains. He explained to listeners that he had been well into the mountains, where he was able to straddle a stream that is the beginnings of the Missouri.

"This is just to orient people in terms of where they are in the watershed and how this all fits together," he said. "We'll have something for everyone, including some who have never been out on the river before."

Laura Semken waited at the second station. Her job was to make certain people were safe -- both on the river, and while they are on the riverbanks.

"Flying fish" were among the things she warned volunteers about. It was likely that some of the volunteers would encounter carp jumping out of the water.

"The safety talk is 'Show Me Safety.' It's to help people know what to expect, take care of their basic needs, and help them feel comfortable getting out on the river," Semken said. "Because some folks have never been on the river. It's a big, scary-looking river."

Staff are managing risk, she said, and Missouri River Relief thinks in round numbers. If it assigns 10 people per cleanup site, and there are 200 people anticipated to arrive at the cleanup, they were going to need at least 20 sites. So staff who conducted reconnaissance earlier in the week had to identify that many places to go.

Before Saturday's effort, Tosie said there was no way to estimate how much garbage volunteers would gather during the morning.

"It's hard to say. Trash is an imperfect science," he said.

The last time the organization held an event in the Jefferson City area that was as large as Saturday's was in 2019, Tosie said. There was a lot of trash in the river that year, following the tornado.

"A lot of our trash was Styrofoam, insulation and things like that," Tosie said. "Everything we were picking up -- we had to order another dumpster."

A member of the Jefferson City High School Green Team, 15-year-old Kamilya Williams said the effort was her first time on the river.

"It was pretty fun. I enjoyed it," Kamilya said.

She said she had a fright during the effort when a "flying carp" struck one of her friends in her boat. 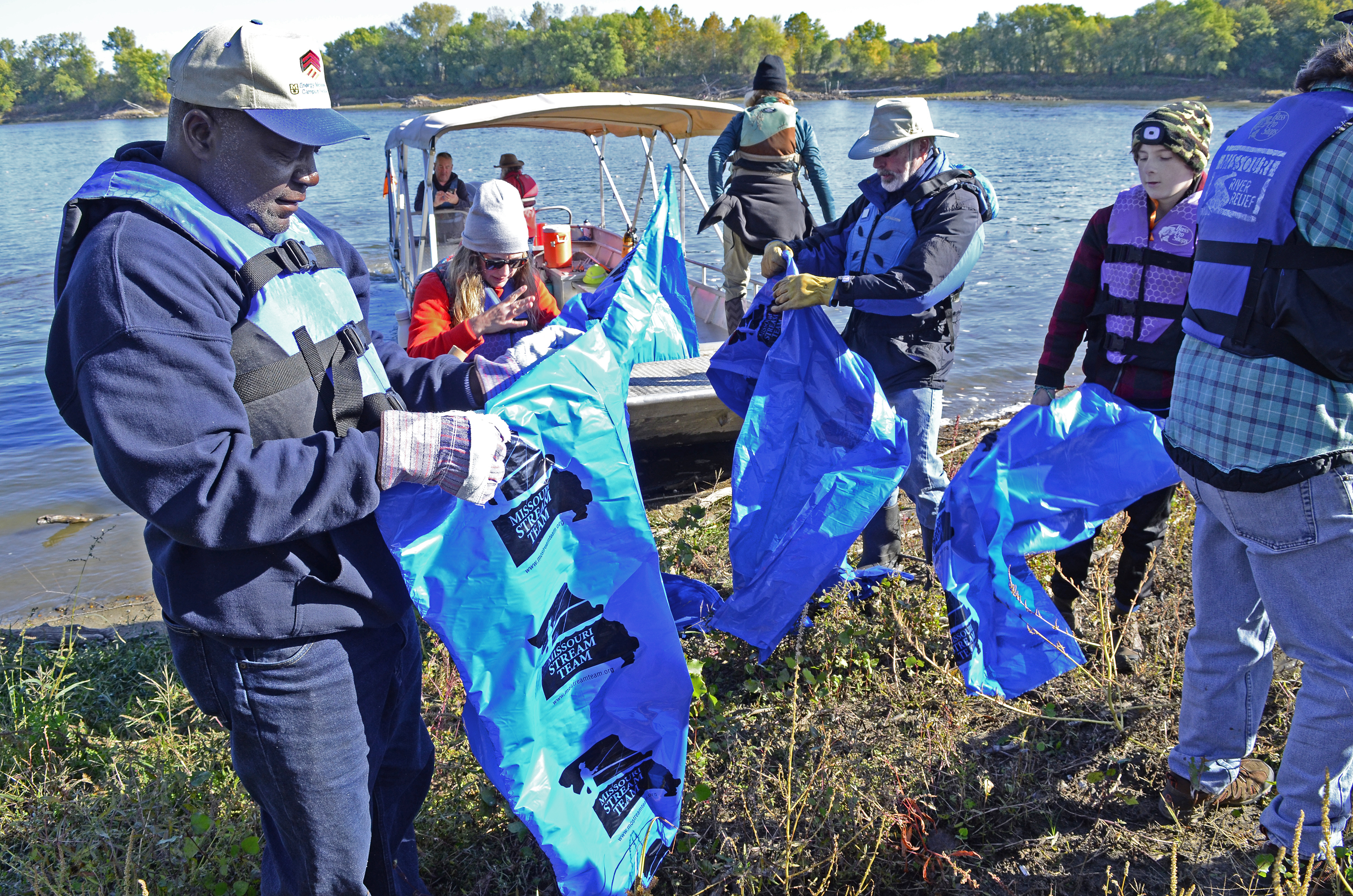 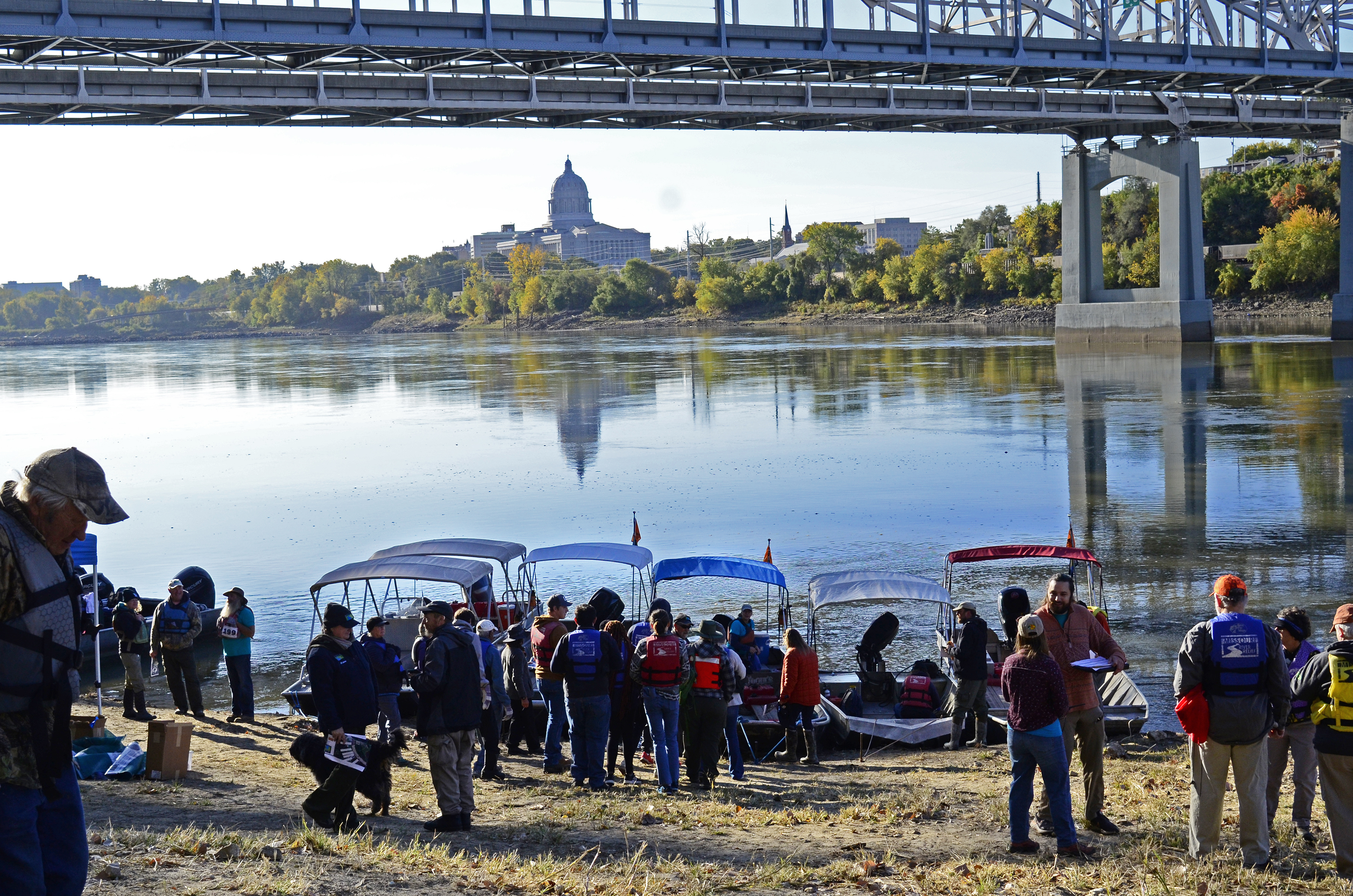 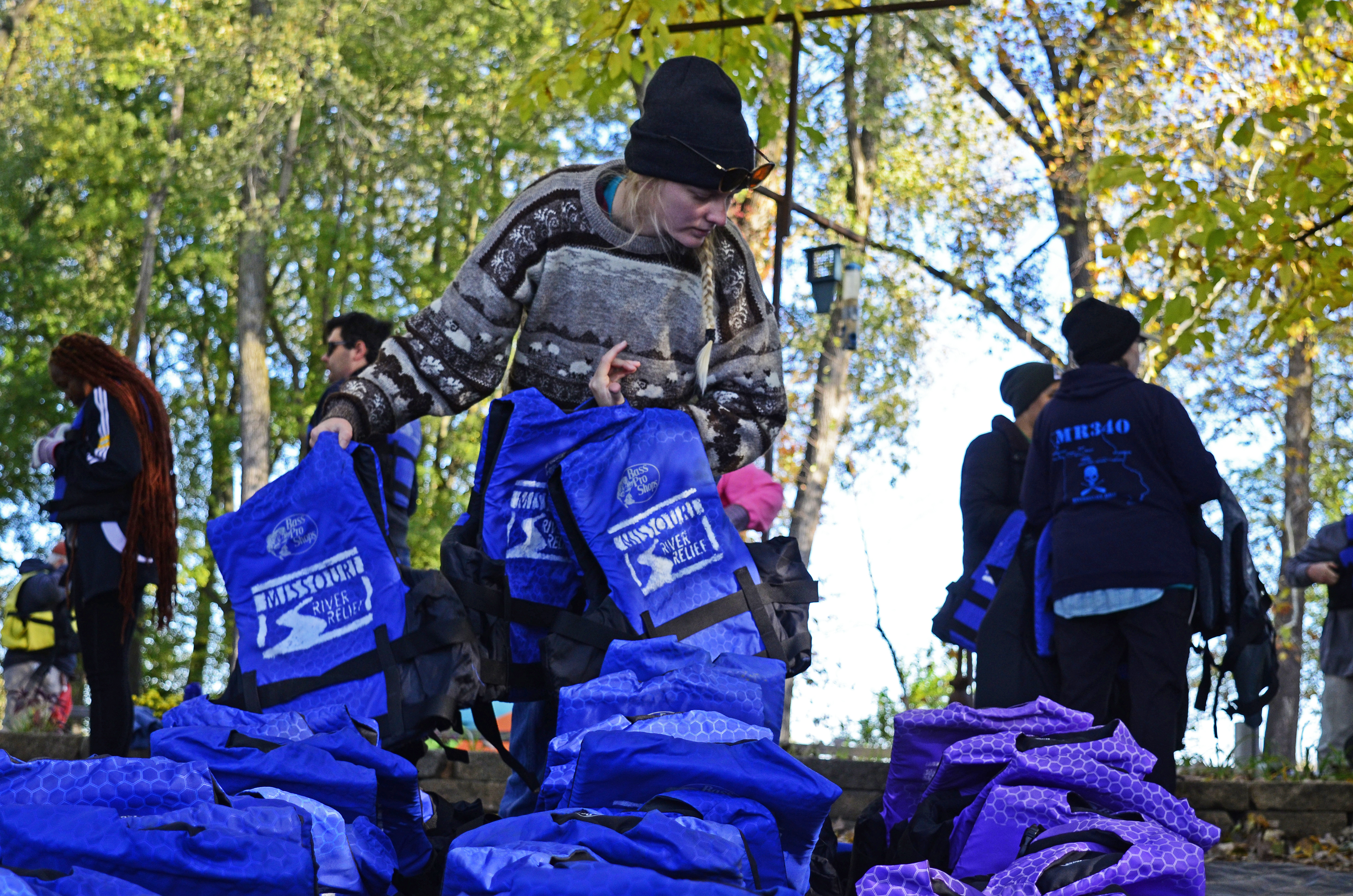 Eileen Wisniowicz/News Tribune photo: Claire Jacobson picks out life jackets for Missouri River Relief volunteers on Saturday, Oct. 15, 2022 at the Missouri River in Jefferson City. All volunteers were given a safety training and brief history lesson before going out on the river. 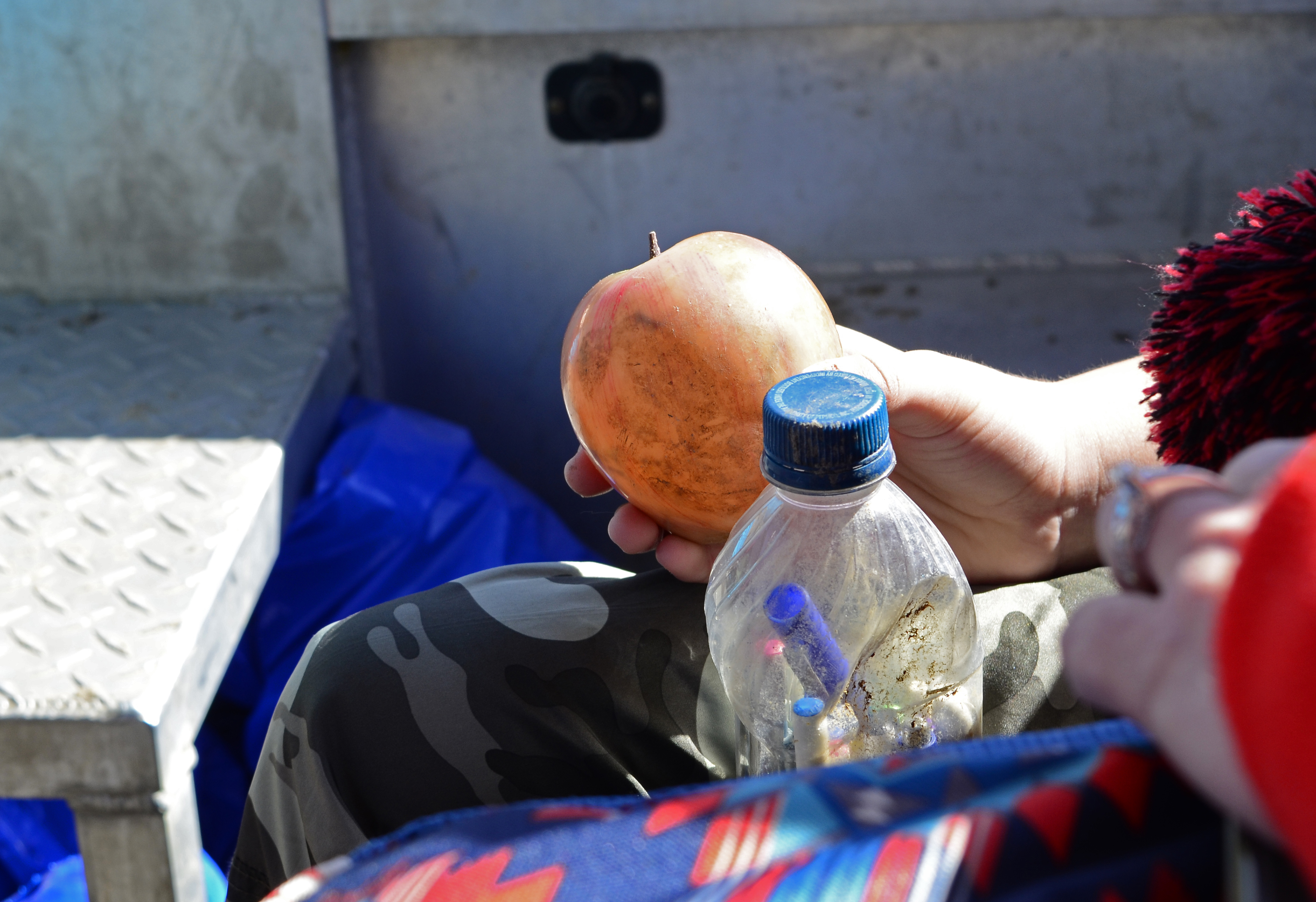 Eileen Wisniowicz/News Tribune photo: Sophia Anderson, 11, brings trash back to the mainland on Saturday, Oct. 15, 2022 at the Missouri River in Jefferson City. Anderson intended to enter the trash finds into the trash contest which had multiple different categories, including "Best Animal Find." 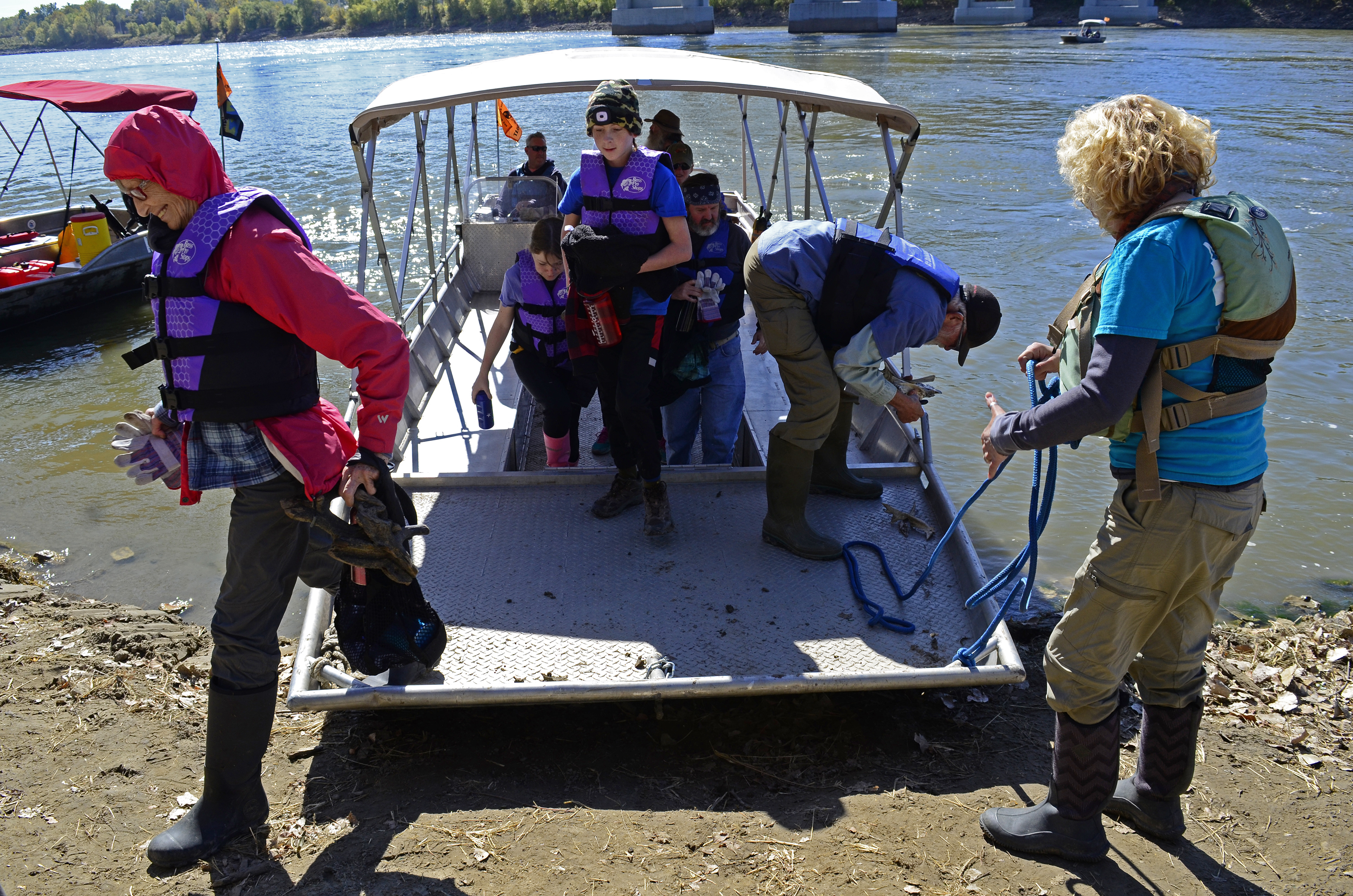 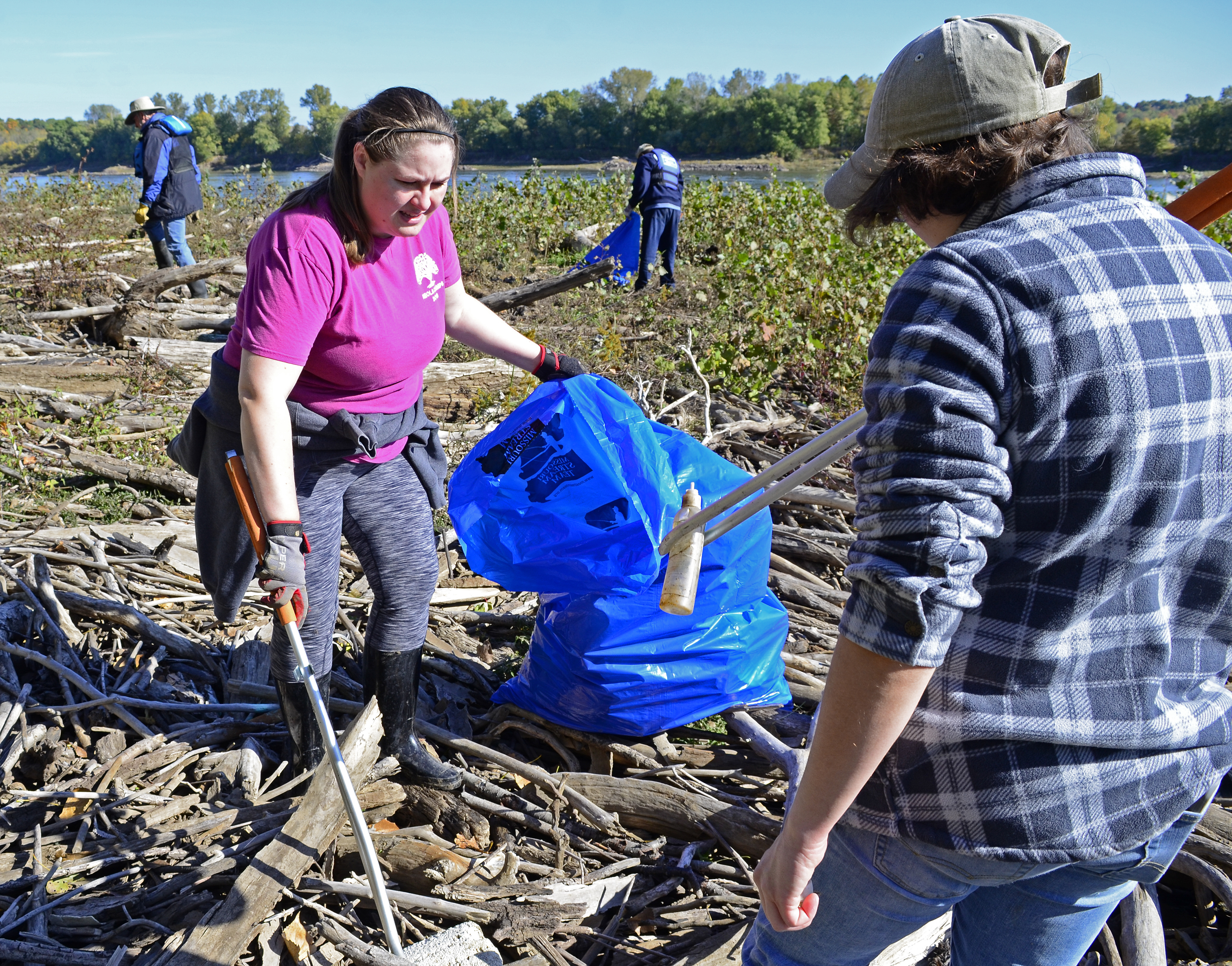