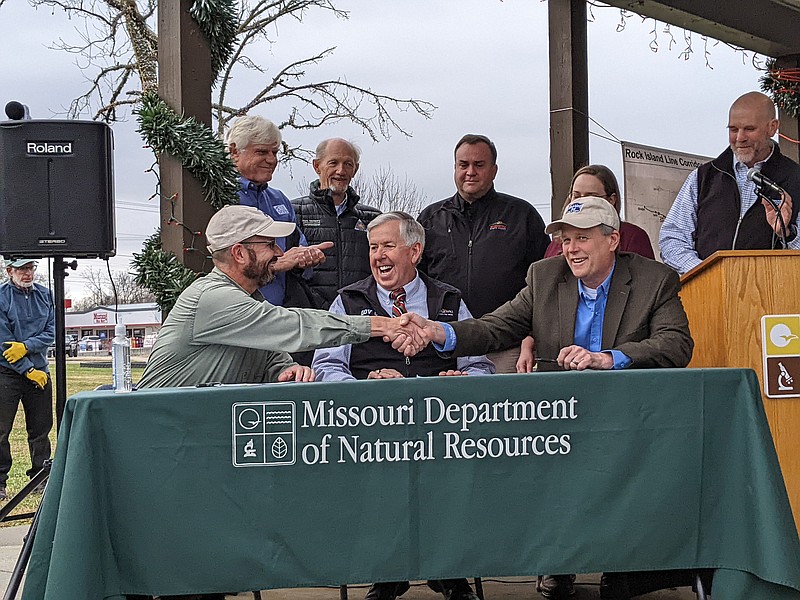 More than 150 Missouri landowners along the Rock Island Trail will receive compensation from the federal government after a ruling last week from the United States Court of Federal Claims.

On Sept. 28, Judge Kathryn Davis sided with landowners along the trail who sought to counter the seizure and transfer of land between the Missouri Department of Natural Resources and Missouri Central Railroad, a wholly owned subsidiary of Ameren Missouri which donated the property at no cost to the state.

Meghan Largent, whose law firm Lewis Rice has represented the landowners since 2015, said the order on the almost 200 parcels of land won’t impact the trail’s development. But, she said, landowners will now be able to initiate appraisals of their land in order to obtain appropriate compensation.

Largent’s clients have waited seven years for the decision.

“This is definitely long overdue,” said Rodney Luebbering, a plaintiff in the case. The Rock Island Railroad corridor runs through Luebbering’s land near Meta in Osage County.

“I’d still prefer to have that land back, and my understanding is that this is how most of the other landowners here feel. It’s nice that we’ll be compensated, but it’s been dragged out so long, it’s hard to really be excited about it.”

In Luebbering’s case, it’s not as much an emotional connection to the land that fuels his ambivalence. Instead, Luebbering is concerned about the corridor’s proximity to landowners’ livestock and crops.

Luebbering must cross portions of the corridor to reach various parts of his land and knows other landowners who drive their cattle across the corridor. Luebbering said he’s worried about the trail being adjacenct to the areas where he frequently hunts and fishes.

Some of his neighbors take great care in preventing diseases from affecting their livestock, which he said would be more difficult with people passing nearby.

Luebbering also occaisionally runs a spray rig for insecticides on his crops.

“I have no control if I’m running a spray rig and, 50 feet away, someone walks over from the trail and exposes themself to the chemicals,” he said.

Luebbering also said his ambivalence stems from disillusionment with the way the land transfer was handled.

“It’s been seven years, and I still haven’t made peace with it. I don’t think I’ll ever make peace with it, just because of how it all went down. It hits deep,” Luebbering said.

If there’s federal law allowing these land transfers, he said, there needs to be federal law for helping landowners get compensated without a lengthy lawsuit.

“It baffles how all these trails have been developed, while knowing it should be paid for without any plan of compensating owners,” he said.

In 2015, the state of Missouri seized the 144-mile railroad corridor of the Rock Island Railroad to convert it into a hiking and biking trail, the Rock Island Trail. The corridor runs through Cass, Pettis, Benton, Morgan, Miller, Cole, Osage, Maries, Gasconade and Franklin counties.

Largent filed a lawsuit that same year on behalf of the hundreds of landowners who own property along the corridor, asking the court to award them compensation, a classic case of eminent domain, said Largent, who has worked on similar cases across the country for almost 15 years.

Under Missouri law, she argued, the land should revert back to the landowners once the railroad abandoned its right away to the land in the 1970s.

But that didn’t happen. Amendments made to the National Trails System Act in 1983 make it possible for the state to take the land by eminent domain for use as a trail.

When the Missouri Central Railroad sold the land to the Missouri Department of Natural Resources for the trail in 2015, the federal government authorized the purchase.

Largent’s lawsuit cited a 1983 Supreme Court decision that made it constitutional for the government to take private property for public use, as long as the landowners are paid just compensation.

Davis’s order cited Missouri law which states that Missouri Central Railroad’s easement existed solely for railroad purposes, which don’t include the sale of land for the trail, meaning the original property owners were owed compensation.

“The most striking part of the opinion was the judge’s willingness to take a fresh look at the laws and not simply repeat what other judges in this court have previously ruled,” Largent said.

The lawsuit wasn’t against Missouri Central Railroad, the Department of Natural Resources or any other entity in the state. Instead, it’s purely against the federal government, meaning the money the landowners will receive will come from a federal pool of money called the Judgement Fund, a bucket of money set aside by Congress to pay the debts and liabilities of the United States. Largent said none of the money will come from the state or the trail project.

Each landowner’s compensation case will be handled individually, she said.

Neither Luebbering nor any of the other landowners know how much they’ll be compensated yet or when that process will begin.

“We’re still at the mercy of the court and our attorney, no doubt,” he said.

Where is the Rock Island Trail project?

The proposed development of the Rock Island Corridor into a state park had been eagerly anticipated by trailgoers but opposed by some landowners.

Representatives from the Missouri Farm Bureau (MOFB) had consistently shared their opposition for trail development without compensation for landowners who would be affected.

“Missouri Farm Bureau opposes the decision to move forward with the proposed Rock Island Trail as a state park and believes it is an affront to private property rights,” said Garrett Hawkins, MOFB president. “Landowners’ easements have only granted use of the corridor for a railroad, which has been dormant for several decades.”

Greg Harris, former executive director and current board member for the Missouri Rock Island Trail project, said he sees this development as a positive.

“The main goal of the project is to preserve the land, so we’ve never been against these landowners getting compensated for it,” he said.

Director of Missouri State Parks David Kelly said development of the trail will occur in sections over several years, as each section of the corridor has different features and challenges.

Kelly said his team is currently determining operational uses for the trail, including trailheads and sections available for equestrian use. They’re also working with landowners adjacent to the trail interested in obtaining a fencing barrier.

This was a topic that frequently arose across a series of public meetings, which started in January, in towns along the corridor to gather input on the trail’s development, said Kelly. At these meetings, participants also discussed trail operations, public safety, landowner and real estate topics, grant opportunities and future partnership opportunities.