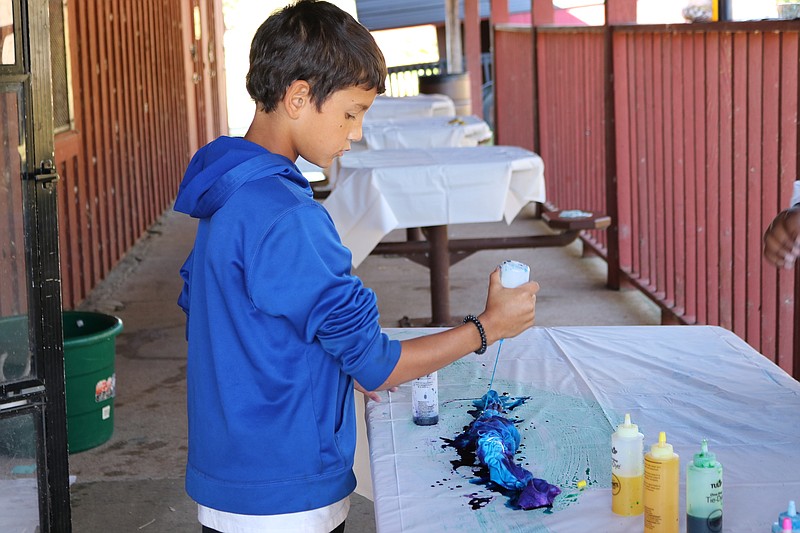 South Elementary fifth-graders got a taste of the outdoors on a sunny and clear Tuesday morning.

They tried their hand at fishing and tie-dyeing shirts while learning about native Missouri wildlife as part of Outdoor Education Day, an annual JC Elementary Schools event.

At the fishing station, P.E. teacher Jared Bisges taught students how to safely grab their fishing rods and cast.

"When you come over to your fishing pole, what do you grab first? What do you look for?" he asked.

He showed them how to grab the hook in one hand and the pole in the other.

"Check your surroundings," he reminded them as they prepared to cast.

Bisges estimated around 60 percent of the students have never fished before Outdoor Education Day.

Since only fifth-graders go to Outdoor Education Day, it's something they can look forward to for a long time.

"It's a lifetime activity that teaches them all sorts of skills, life skills that they have, that they can use, from patience, to learning something they can do outdoors that doesn't cost a lot of money ... how to tie knots, how to handle fish, how to respect the environment, and everything like that -- and then they get to come out here and have fun," Bisges said.

The group hadn't caught any fish so far that morning, but Rob Clark, who'd come out with East Elementary students on a colder, rainier day, said that group had caught plenty.

Naomi Bryan and Joseph Robinson were some of the first fishers on Tuesday.

Joseph had been fishing before, but it was Naomi's first time.

She thought the casting was a little bit difficult. While it took some time, many students were able to master casting by the end of their time at the station.

Naomi and Joseph said they like to be outside -- Joseph to play football and Naomi to play softball.

Both were eager to get to the tie-dye station -- there children squirted blue, purple, green and pink dye onto shirts, sloshing colorful liquid all over the white plastic table cloth and turning their hands into rainbows.

Art teacher Meghan Dudenhoeffer said the students love the tie-dye station because they all get to take home their shirts, and they frequently wear them to school.

It's a messy activity, but that's part of the fun.

"That's why I don't bring gloves, because I'm just like, you'll be fine. It'll be fine, and a little dirt on your hands never hurt anybody," Dudenhoeffer said.

There were also stations taught by Missouri Department of Conservation employees on reptiles, mammals and fish. Students learned about what it meant to be "cold-blooded" or "warm-blooded" and what the largest and smallest mammals in Missouri are -- the elk and the shrew.

Bisges said they were able to bring the Conservation Department into the event this year, and it has really improved the event.

The main goal is just to get children learning outdoors, Bisges said.

In the accompanying video, students have fun fishing, tie-dyeing shirts and learning about native Missouri wildlife. 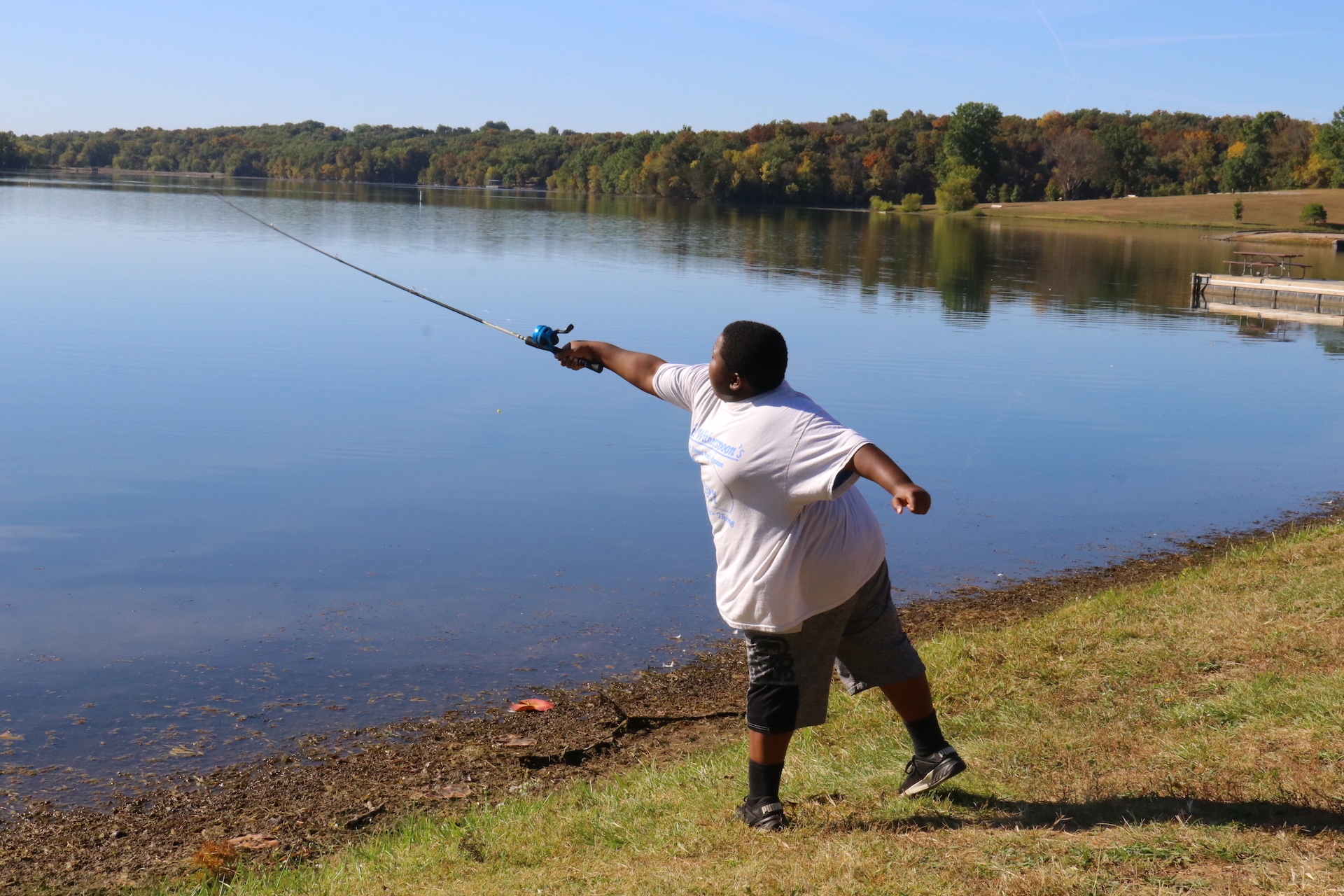 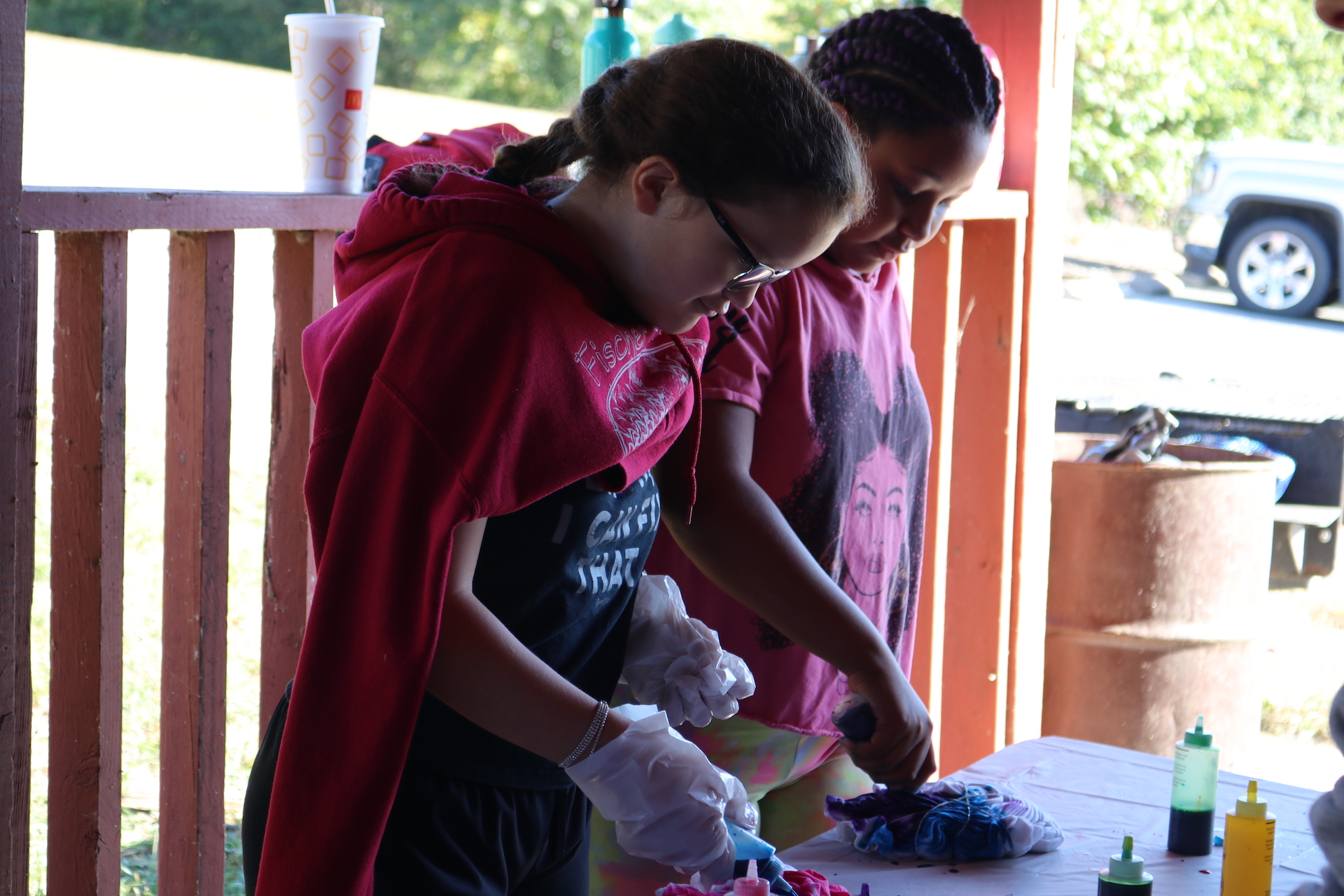 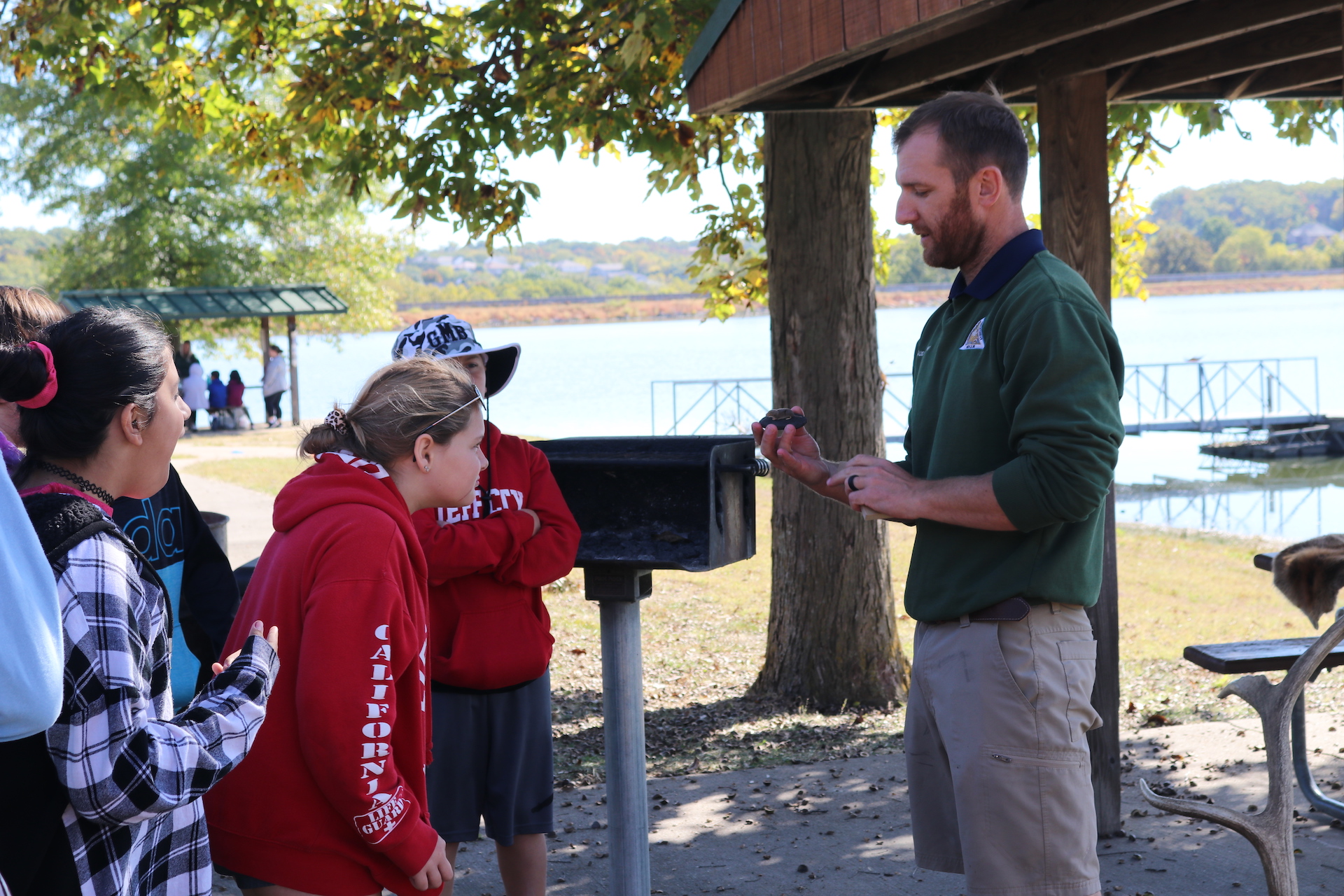 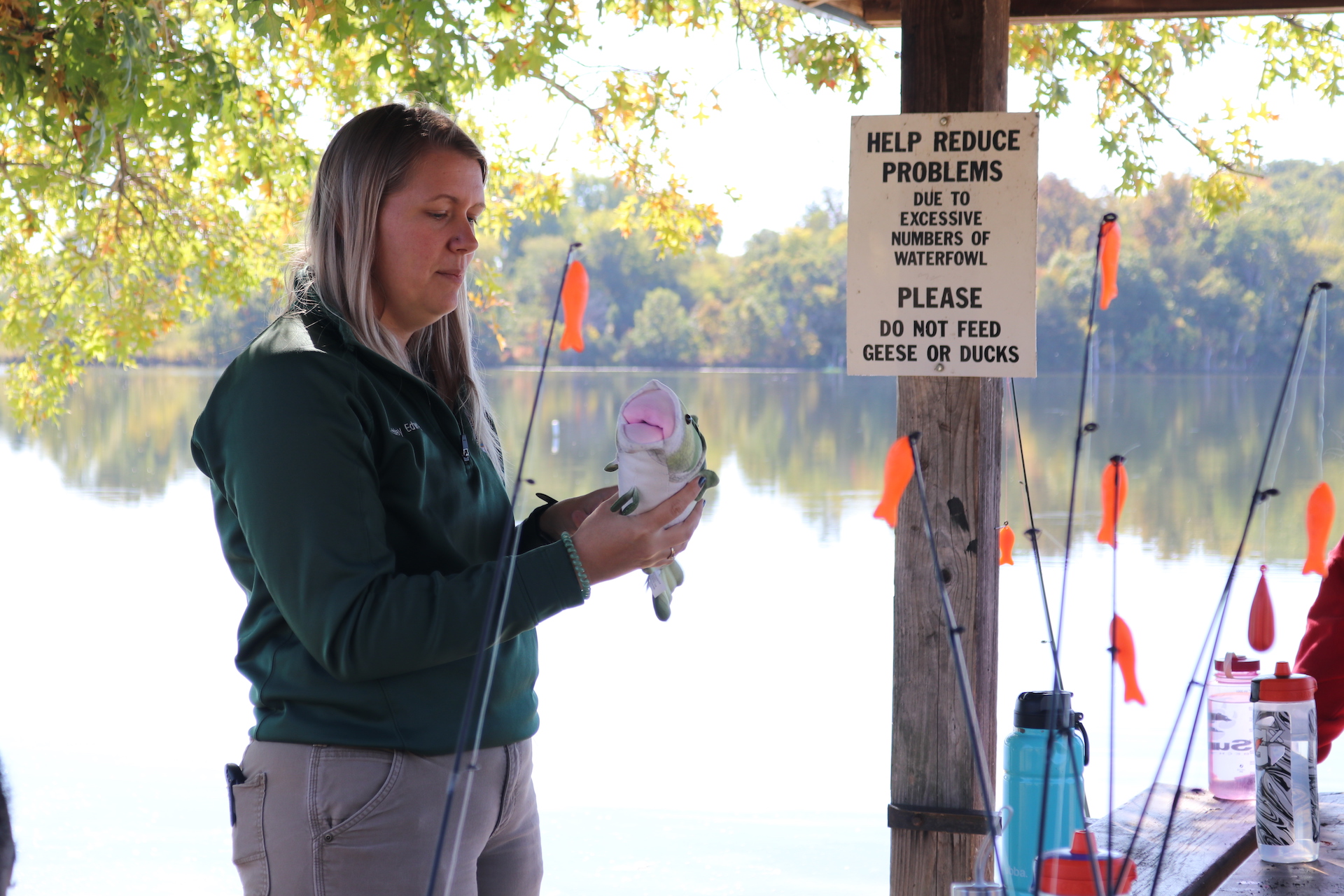 Anna Campbell/News Tribune photo: Ashley Edwards instructs students on how to hold and measure different types of fish, including trout, sunfish and bass. 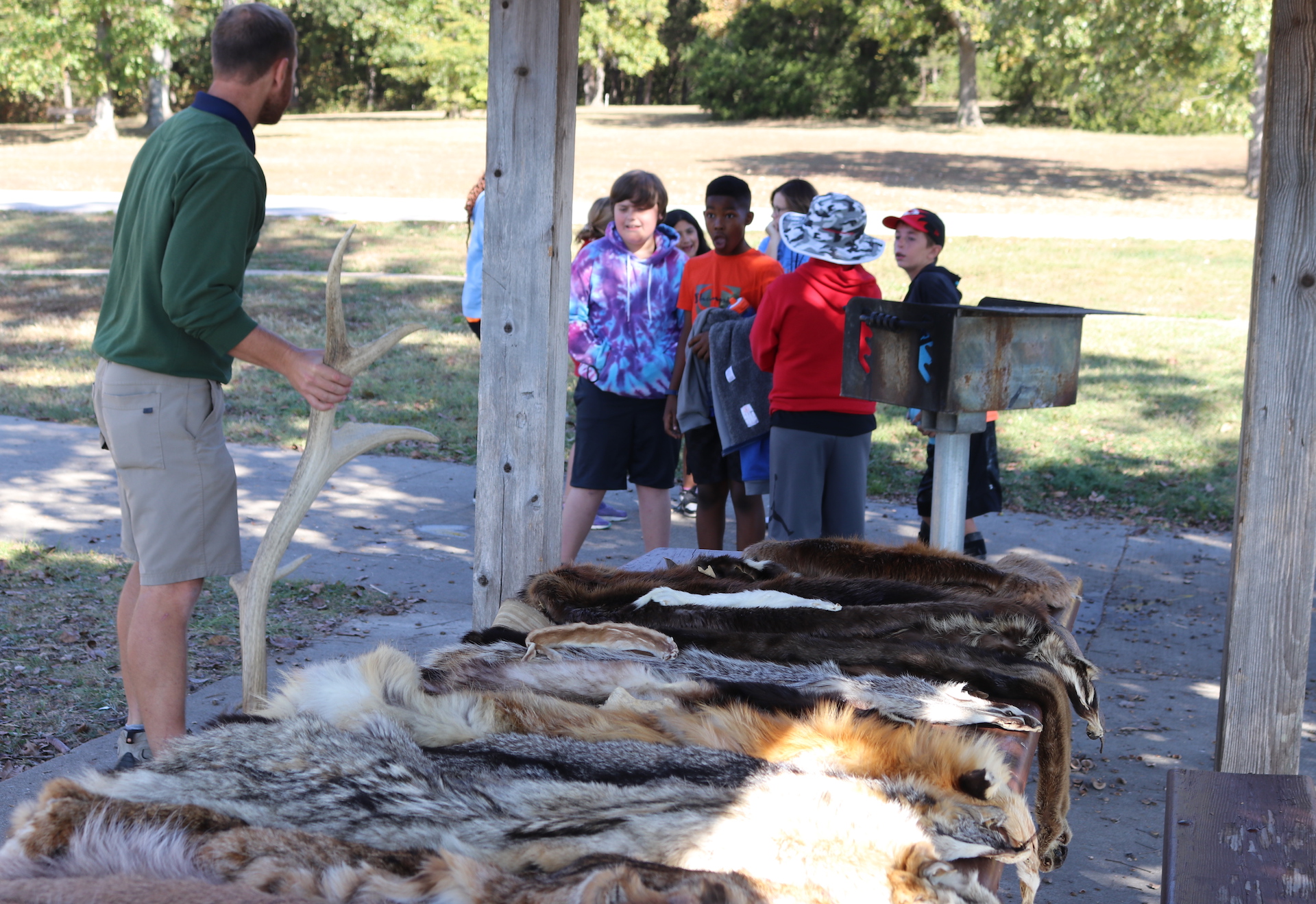 Anna Campbell/News Tribune photo: Several students were amazed at the size of the elk antlers that Austin Lambert pulled out to show them Tuesday, Oct. 4, 2022, at Outdoor Education Day at Binder Park. Elk are the largest mammals among Missouri wildlife.