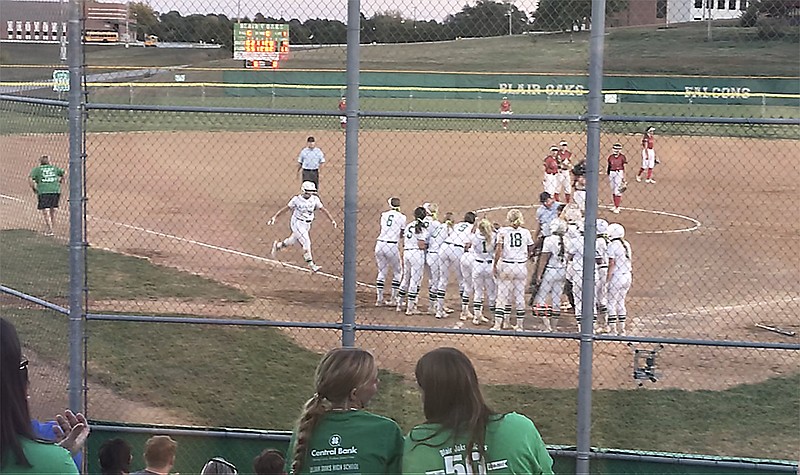 WARDSVILLE -- The Blair Oaks Lady Falcons won another Tri-County Conference softball title, and they did it with an exclamation point.

Kenadi Braun capped a powerful offensive performance by the Lady Falcons, hitting a walk-off grand slam to straightaway center field for a 15-4 victory in six innings Tuesday against the Southern Boone Lady Eagles at the Falcon Athletic Complex.

“No matter what kind of walk-off it was, I don’t think I’ve ever had a season where we’ve had this many walk-offs to end a game,” Blair Oaks coach Sharon Buschjost said. “It’s been fun and I hope those continue.”

Buschjost also hopes the trend of Blair Oaks winning conference titles continues. The Lady Falcons have won Tri-County titles in 26 of her 27 seasons as head coach.

“The biggest takeaway from this game is being outright conference champs,” Buschjost said.

The only season Blair Oaks hasn’t won a conference title was in 2010, the year Warsaw won the Tri-County and the Class 2 state championship. Since then, the Lady Falcons have won 12 consecutive conference titles, posting a 79-2 Tri-County record in that span.

“I like that math,” Buschjost said with a smile.

Blair Oaks had already clinched a share of the conference title entering Tuesday’s game. To avoid a three-way tie atop the standings with Southern Boone and Hallsville, the Class 3 No. 5 Lady Falcons would have to beat the Class 3 No. 10 Lady Eagles.

“I told the team I didn’t want us to be back on our heels or caught off-guard by a Southern Boone team that is playing very well and could easily walk away with a win tonight,” Buschjost said. “I thought our team responded pretty well.”

Blair Oaks was on its toes from the get-go, scoring five runs in each of the first two innings to build a 10-2 lead against Southern Boone.

“That should relax a team, offensively,” Buschjost said.

Kenadi Braun and Kally Bruce each had RBI singles in the first inning, while Belle Boessen hit a double off the top of the left-center field fence, missing her third homer of the season by about 3 inches.

Taylor Groner led off the bottom of the second inning with a home run that hooked inside the left-field foul pole to extend the lead to 6-0.

“I want to give a shoutout to our industrial arts program who made those foul poles,” Buschjost said. “They came in handy. The ball sneaked inside the foul pole and I had a good view of it.”

Boessen added a two-run double later in the second inning. She finished the game 4-for-4 with four doubles and three RBI from the No. 7 spot in the batting order.

“Before the game, she was looking at where she was batting,” Buschjost said. “I said, ‘Belle, you’re really not a seventh-place hitter. The way you’ve been swinging, you should probably be up higher.’

“She doesn’t care where she’s at, she’s just happy to be in there.”

Bruce and Boessen hit back-to-back doubles in the third for another Blair Oaks run.

Southern Boone scored two runs in the second inning, one in the third and another in the fourth, making the score 11-4.

Olivia Moyer finished with four strikeouts and no walks in six innings. The Lady Eagles consistently put the ball in play all game, finishing with six hits.

“Southern Boone kept fighting at the plate, getting base hits and scoring runs to extend it,” Buschjost said. “… Offensively, they’re going to fight in every at-bat and make our defense work by putting the ball in play.”

Braun’s grand slam was the Lady Falcons’ 16th hit of the game. Eight players had at least one hit.

“We have players that are having great at-bats,” Buschjost said.

Baley Rackers had three singles and two RBI, while Bruce, Groner and Braun each had two hits. Braun led the team with five RBI and Groner also drove in two runs.

Blair Oaks had nine extra-base hits in the win.

Boessen also made what appeared to be an impressive diving catch on a flyball hit into the right-center field gap in the sixth inning, but the umpire ruled the ball hit the ground for a single.

Next up for Blair Oaks (23-6, 7-0 Tri-County) is a rematch from last season’s Class 3 state championship game against third-ranked Chillicothe (21-6) at 6 p.m. Thursday, followed by the JV contest. Both games will be played at Mizzou Softball Stadium in Columbia.

“I think the coaches are just as excited for this game as the players,” Buschjost said. “It’s a big game. They’re a great team, it’s a rematch and it’s at a great facility.”

In Thursday’s JV game, Blair Oaks rallied for a 13-5 win against Southern Boone, improving its record to 14-3.