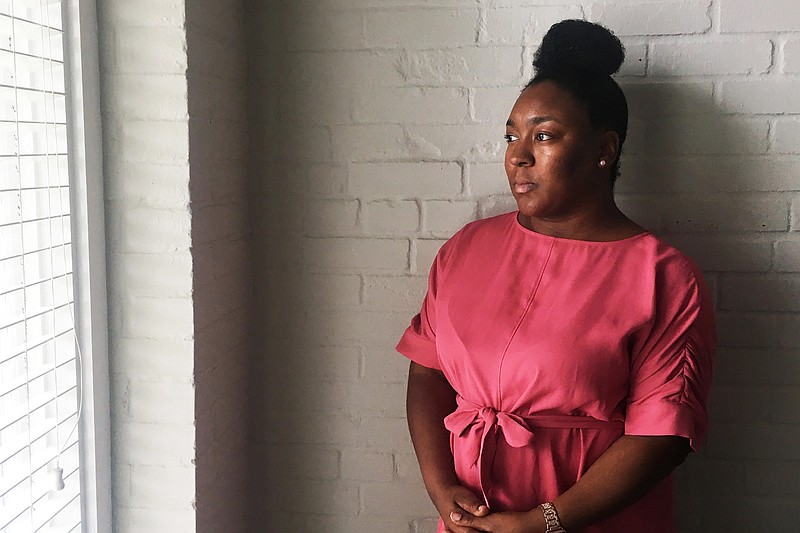 J.R. Chester is a program director for Healthy Futures of Texas, a nonprofit sexual health advocacy and education organization. She knows firsthand the challenges of being a teen mother, since she first got pregnant the summer before her senior year of high school. "If you don't know your options, you don't have any," she says. (Emmarie Huetteman/Kaiser Health News/TNS)

DALLAS -- J.R. Chester got pregnant the summer before her senior year of high school. A bright student with good grades, she gave birth, graduated, and was pregnant again when she arrived at college that fall.

She was a teen mom -- like her mother, her grandmother, and her great-grandmother. Her school did not teach sexual health education, and preventing pregnancy was a foreign concept. Her sons are now teenagers.

"If you don't know your options, you don't have any," said Chester, now a program director for Healthy Futures of Texas, a nonprofit sexual health advocacy and education organization. "Everyone was pregnant. And it just felt like: When it happens, it happens."

While teen pregnancies have declined in the state and across the country in recent decades, Texas continues to have one of the highest state rates of teens giving birth at 22.4 births per 1,000 girls and women ages 15-19 -- the lowest, in Massachusetts, is 6.1. Along with Alabama, Texas has the nation's highest rate of repeat teen pregnancies. This fall, school districts across Texas are marking a shift to what educators call an "abstinence-plus" curriculum -- the first time the state has revised its standards for sexual health education in more than 20 years.

Although districts may choose their own curriculum and teach more than the state requires, the state's minimum health standards now go beyond focusing on abstinence to stop pregnancies and include teaching middle schoolers about contraceptives and giving additional information about preventing sexually transmitted infections, such as the human papillomavirus (HPV) that has been linked to several cancers.

Previously, a 2017 report showed 58 percent of Texas school districts offered "abstinence-only" sexual health education, while only 17 percent offered curriculums that expanded beyond that. A quarter of schools offered no sex ed.

Whether Texas teens receive any sex ed at all, though, depends on whether their parents sign them up. While parents previously had to "opt out" of sex ed portions of their children's health classes, they now have to "opt in" for their children to receive those lessons. That means parents must sign and return a permission slip -- a change some fear could lead to children missing out not so much due to parental objections but because of lost forms and language barriers.

These changes in sex education come as the state ratchets down abortion access following the Supreme Court decision in June overturning Roe v. Wade, which guaranteed a constitutional right to abortion. Texas has one of the nation's most restrictive abortion laws. The question of how schools educate young people about their sexual health and development has taken on new urgency now that many state governments have enacted abortion bans.

Health advocates say many women may have no choice but to carry a pregnancy to term and that has created a new class of haves and have-nots: those who have the knowledge, resources and agency to protect themselves from getting pregnant, and those who do not.

Texas is big and diverse enough to need education policies that can be adapted for remote border towns and sprawling metropolitan areas -- both of which have high rates of unintended teen pregnancy.

In 2019, the Texas Board of Education began rewriting the health education standards that had been in place since the 1990s. It kept in place the standards stating "that there are risks associated with sexual activity and that abstinence from sexual activity is the only 100 percent effective method to avoid risks."

Under Texas law, sex ed must still present abstinence as "the preferred choice." When schools teach about condoms and other forms of contraception, they must provide what Texas calls "human use reality rates" -- or, as it is described in medical literature, "typical use" -- that detail the effectiveness of those methods outside laboratory settings.

The changes taking effect this year primarily address if and when a Texas student learns about certain sexual health subjects. Under the state's previous standards, Texas schools could teach about birth control methods beyond abstinence, but only in high school health classes, which are optional. Now, information about contraceptives, as well as more about STIs, is taught in middle school health classes, which are required.

In May, the Dallas Independent School District, one of the nation's largest, approved lesson materials to meet the state's new requirements. But school officials here wanted to do more given the scope of the problem. Advocates say Dallas County has the highest rate of repeat teen pregnancies in the nation.

The district curriculum goes beyond the state minimum and includes gender identity and extra information about contraceptives, as well as a contract with Healthy Futures of Texas to teach an optional after-school program for high school students.

The previous curriculum was "very scientific" and "very dry," said Dustin Marshall, a member of the school district's board of trustees, and left out basic information about contraceptives, like how to put on a condom.

"One of the primary ways to reduce teen pregnancy and relieve generational poverty from teen pregnancy is to teach contraception," he said. "Not to just assume that if you teach abstinence, every kid will obey. That's a little too head-in-the-sand, from my perspective."

Some critics say the state's standards, while an improvement, are inadequate when it comes to consent and LGBTQ+ issues, including gender identity. The state board does require that schools teach about healthy relationships and setting personal boundaries for sexual activity.

Under Texas law, parents have the ultimate say over not only whether their child receives sexual health education, but also what is covered in those lessons.

For nearly 30 years, school districts have been required to create and appoint school health advisory councils, tasked with reviewing and recommending health curriculums, including on sexual health. Most members must be parents and not district employees, so the content of sex ed classes can still vary widely by district.

Jen Biundo, senior director of policy and research at Healthy Futures of Texas, described a study she helped conduct asking parents and teenagers who they would prefer to teach teens about sex. While parents and teens ranked them differently, she said their choices were the same: schools, doctors, and parents. Health advocates point out not all parents can or do educate their children about sex -- and that many teens live in unstable situations like foster care.

Biundo said when they asked teens where they learn about sex, the top answers were "my friends and the internet."

Indeed, some parents, especially those who were teen mothers themselves, may not know about birth control or how to access it.

"Where are the parents supposed to get the knowledge from?" Chester said. "Because they came through the same school system that didn't teach sex ed, and all of a sudden they're supposed to know what to teach their kids."

"We are trying to end that generational curse of being uneducated," she said. 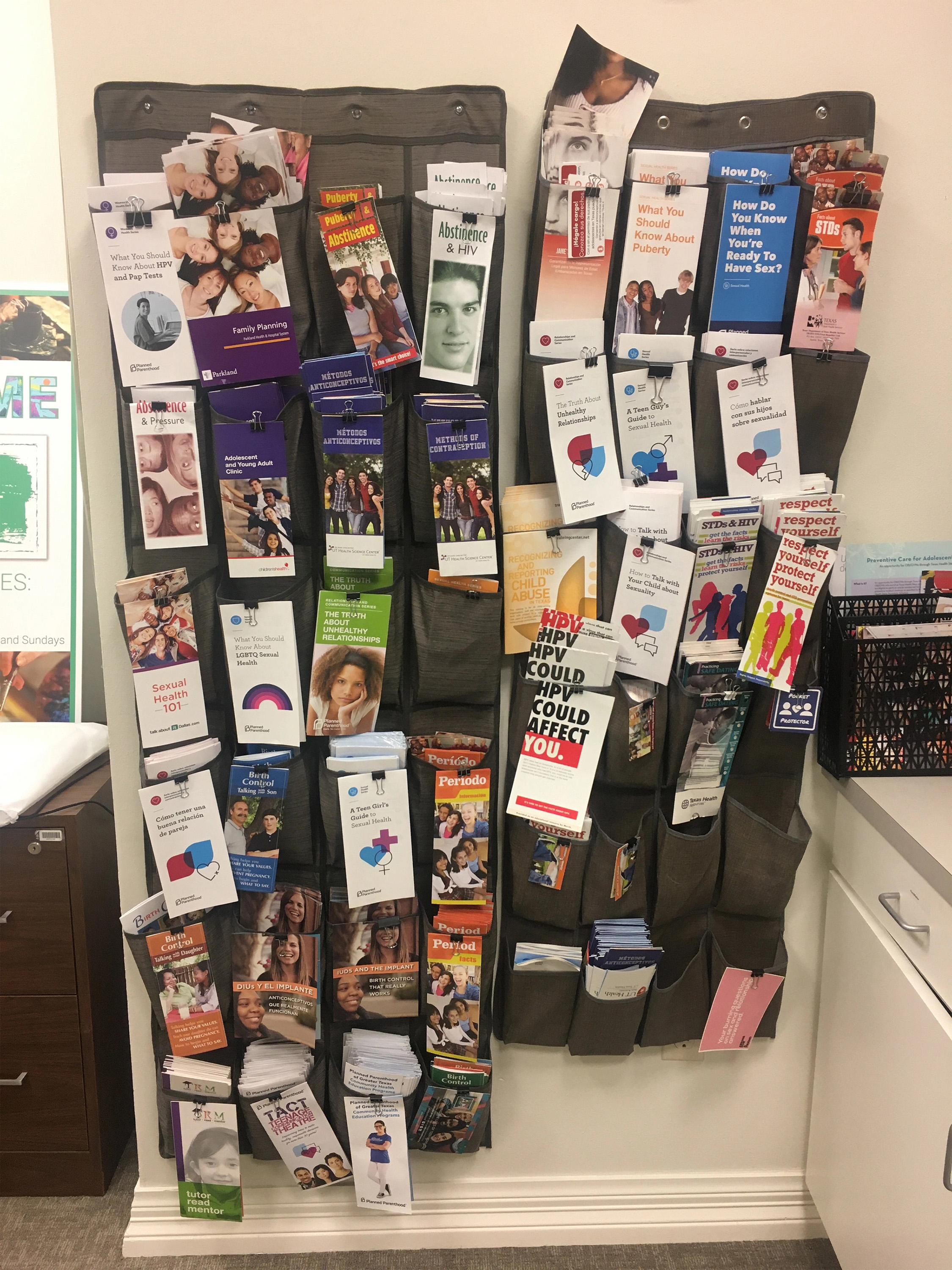 Pamphlets about sexually transmitted infections and preventing pregnancy are part of the materials available at the Dallas office of Healthy Futures of Texas, a statewide nonprofit sexual health advocacy and education organization. (Emmarie Huetteman/Kaiser Health News/TNS)