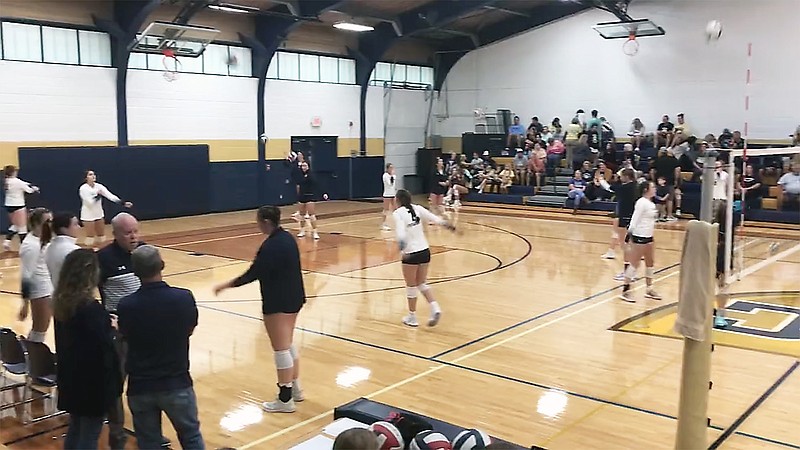 Helias volleyball players warm up on the court prior to Monday's match against St. Joseph's Academy at Helias Gym. (Greg Jackson/News Tribune)

The Helias Lady Crusaders were coming off their best win of the volleyball season.

Then the St. Joseph’s Academy Angels put an end to their seven-match winning streak Monday night.

“Nobody likes to lose, but if we can learn from this and it will help us down the road, then it will be worth it,” Helias coach Davis Harris said.

“St. Joseph’s came ready to play,” Harris said. “They’ve got some hammers on that side. They’re big and they played really well.”

It was mostly a well-played night for the Lady Crusaders.

“Well, except for the second set,” Harris said.

Helias never led until the final two points of the first set, as the Angels jump out to a 7-3 lead behind two kills from Anna Duncan and two blocks from Kayla Jansen.

St. Joseph’s never led by more than four points in the opening set, but the Angels were ahead 20-16. Josie Morasch got a kill to turn the tide for the Lady Crusaders, then a pair of St. Joseph’s attack error made it a one-point match.

With the Angel serving for set points at 24-23, Helias answered with a pair of Chapel Dobbs kills to take its first lead of the followed. The Lady Crusaders got the next point on a St. Joseph’s attack error to take a 1-0 lead.

“After we pulled that first set out, I thought we might get some confidence and some momentum,” Harris said. “We just came out flat in the second set.”

Harris felt like his team stole that first set from St. Joseph’s after committing nine errors, five on serves.

“They had the lead the whole set,” he said. “When we started making them play the ball, they made a few mistakes. Every team is going to make mistakes, you just have to take advantage of it.”

Helias got kills from Dobbs and Summer Hake and a block from Libby Gaines toward the end of the second set.

The Lady Crusaders led 5-3 in the third set after a kill by Dobbs and a block from Josie Morasch. The Angels answered with a 10-3 run, taking advantage of four straight Helias errors.

St. Joseph’s served the ball well all match, making it difficult for Helias to get a string of points offensively.

The Angels were also strong defensively, finishing the match with 13 blocks.

“We did such a good job of swinging high, and I don’t know how many times we tooled the Rock Bridge blockers,” Harris said. “Tonight, we didn’t tool them hardly at all. We hit right into their hands instead of hitting off the them.”

Hannah Hentges had a kill, Landrey VanOverschelde served an ace and Hentges followed with a block to put Helias ahead 16-15 in the third set.

The Lady Crusaders were strong to start the fourth set, getting four kills from Dobbs to build an 8-5 advantage. Harris was hoping his team could get enough sideouts to hold that lead and force a fifth set.

“But every little crack we had in our defense, they found it,” he said.

Morrissey had a team-high 12 kills for St. Joseph’s, followed by Baliva with 11 kills.

The Angels and the Lady Crusaders met in August in a Jamboree in St. Louis. Each of the three sets were decided by two points.

Dobbs had a match-high 18 kills for Helias, followed by Morasch with eight kills and Hake with seven kills and seven blocks. VanOverschelde had 24 assists, Tori Schmidt added 12 assists and Izzy Herrbold finished with 16 digs.

The freshman and JV matches start at 5 p.m., followed by the varsity match at 6:15 p.m. It will be Helias’ 11th home match of the season.

“It will be loud and noisy in here,” Harris said.

Helias won Monday’s JV match 15-25, 25-13, 15-12 to improve to 13-5-3. Hentges had eight kills, followed by Kendal Herzing with seven kills, and Avery Saucier added 15 assists. Sophie Verslues had a team-high 13 digs and Hentges and Lauren Schroeder each had 10 digs.

In the freshman match, Helias lost 21-25, 19-25 to fall to 16-2. Savanah Pemberton had a team-best five kills, Linley Pleus had six assists and seven service points and Liza Boyer finished with 19 digs. Peyton Samson and Claire Carel each added two blocks.