Press Box: Pujols has been money well spent by the Cardinals 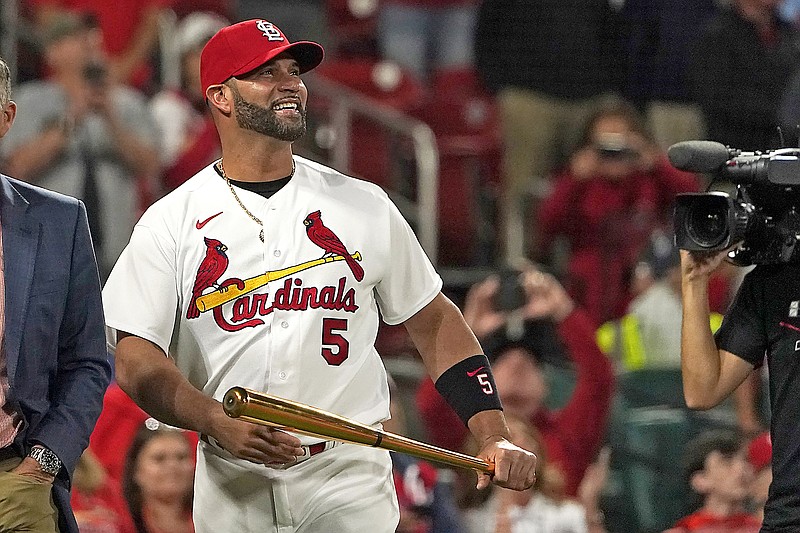 Albert Pujols of the Cardinals smiles during a ceremony honoring the recent hitting of his 700th career home run before the start of Friday night's game against the Pirates at Busch Stadium in St. Louis. (Associated Press)

My older brother Brian and I have this running inside joke, where we challenge the other to recall some of our favorite memories simply based on a dollar amount.

The best $75 we’ve ever spent? That was the cost of each of our tickets to sit in the left-field bleachers for the St. Louis Cardinals’ Opening Day game in 2017 against the Chicago Cubs. The Cardinals won that game 4-3 on a walk-off single by Randal Grichuk.

The best $109 we’ve ever spent? That was for the most spacious hotel room I’ve ever stayed in when we made a stop in Philadelphia on our New England road trip during the summer of 2010. Seriously, that hotel room was twice the size of my apartment.

The best $10 we’ve ever spent? Without question, it was for the cost of a 2007 Border War ticket to sit in the 30th row at Arrowhead Stadium to watch the greatest Missouri football game ever, a 36-28 win against Kansas. It felt like Todd Reesing was sacked in the end zone for a safety just a few feet in front of us.

I could go on, but I feel like you now have a firm grasp on this little game we play.

Without any delay, he will tell you it’s the amount of money the franchise spent on Albert Pujols’ 2022 season contract.

As we begin the final week of the 2022 regular season, here is a look at some of Pujols’ numbers.

Oh yeah, I’d say the Cardinals got their money’s worth out of Pujols, considering he was initially going to be a part-time player and key bat against left-handed pitchers.

The first half of the season did not go well for Albert, who was hitting just .215 with six home runs at the All-Star break. Then he went to Los Angeles and smashed enough home runs to reach the semifinals of the Home Run Derby at Dodger Stadium.

I don’t know if it was the derby or if it was the weeklong break, but when the season resumed, the Cardinals started getting a productivity level that looked more like the 2011 version of Pujols, as the 42-year-old was looking for one final time to shine.

Pujols hit eight home runs in the month of August, and suddenly No. 700 was within reach, rather than being an afterthought.

It wasn’t just Pujols adding to his home run total. He was coming through in big moments. His pinch-hit home run in the eighth inning Sept. 4 were the only runs in the Cardinals’ 2-0 win against the Cubs.

With the way he has been swinging the bat in the second half of the season, Pujols suddenly became a player Cardinals manager Oli Marmol had to put in the batting order every day, not just when St. Louis faced a left-handed starting pitcher.

Most importantly, despite being the oldest active MLB player, Pujols’ performance helped lift the Cardinals to a postseason berth in the final season of his 22-year career.

Around the time of the All-Star break, a number of Cardinals fans were calling for Pujols to be cut from the roster, designated for assignment. I never understood their clamoring.

Even with a sub-par performance in the first half, the Cardinals were still getting their money’s worth out of Pujols as a mentor within the clubhouse. St. Louis has played a number of rookies this season, and players such as Juan Yepez and Lars Nootbaar have benefited from being around Pujols, peppering him with questions on a daily basis, I’m sure.

And who would the Cardinals replace Pujols with on the roster? Ben DeLuzio? Alec Burleson? Please.

Since the All-Star break, the Cardinals could have paid Pujols an additional $7.5 million, and it would’ve been worth every penny.

Some people say money is no object. Perhaps. But if I mention “$2.5 million” to a Cardinals fan, he or she will know exactly what -- or rather, who -- I’m talking about.