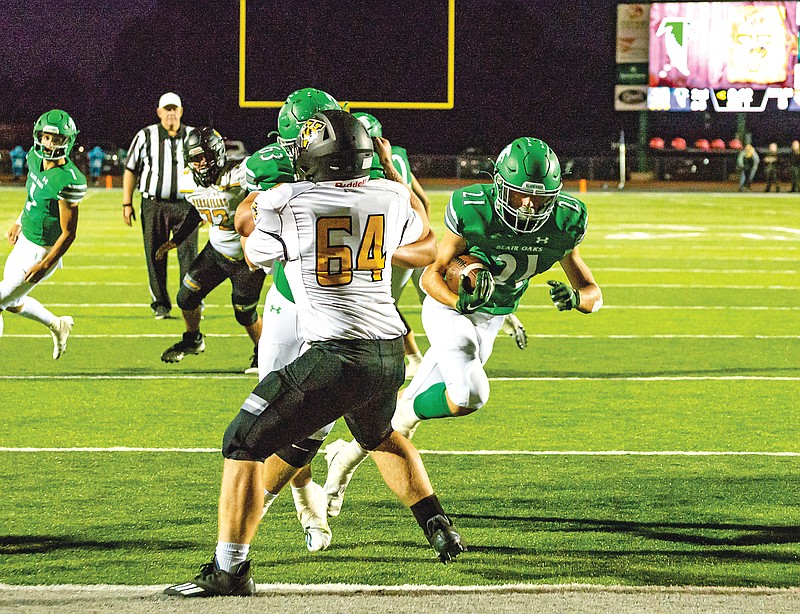 Blair Oaks running back Hayden Lackman gets a block from offensive lineman Justin Atnip (63) on his way to a touchdown run during Friday night’s game against Versailles at the Falcon Athletic Complex in Wardsville. (Ken Barnes/News Tribune)

WARDSVILLE -- With the Blair Oaks Falcons holding a 51-0 lead against the Versailles Tigers, the Falcons’ JV players took the field for the first time.

There was still 8:01 remaining in the second quarter. The JV players got plenty of time on the field Friday night.

The JV defense started by getting two tackles for loss, picking up where the first-string players left off.

“We practiced with our ones and twos all week, and that’s what we expect,” Blair Oaks coach Ted LePage said after the Falcons’ 65-6 win against the Tigers. “We expect to go out and make good plays, and to play to the level they’re capable of.”

The JV defense forced a three-and-out on its first series against Versailles.

“The No. 2 defense went in immediately and did the same exact thing the ones did,” LePage said, as the Tigers punted for the fourth time of the game with 5:43 left in the first half. “They made their reads and went to their assignments.”

The Tiger offense started with a short field on its next series. Versailles converted on a fourth-and-3 with an 8-yard pitch to Cage Pritchett, then on third-and-2, Ty Ollison completed a 14-yard touchdown pass to Tristan Albrecht less than a minute before halftime.

Aside from those two conversions, the JV defense shined. Versailles was held to just 94 total yards of offense and seven first downs.

“The touchdown pass, that was a good throw to a good receiver,” LePage said. “We had good coverage on him with our two defensive backs.”

The defense opened the half with another three-and-out.

“We didn’t give up a first down with our first team,” LePage said. “That was one of the real big pluses I’ll take defensively.”

The offense was on the field for just two plays, as Dylan Hair pump-faked a short pass, then threw deep down the sideline to Joey Wilde for a 35-yard touchdown pass, extending the Blair Oaks lead to 58-6 with 7:57 to go in the third quarter.

Then it was the JV team’s turn to finish out the game.

Nolan Laughlin recovered a fumble for the Falcons, their third takeaway of the game. In the first half, Bryson Varner had a 31-yard fumble return for a touchdown and Nick Closser had a 51-yard interception return for a touchdown, but the score was called off due to a block-in-the-back penalty on the return.

Versailles’ offense then possessed the football for 9:17 spanning the third and fourth quarters. The Tigers moved the ball to the Falcon 30-yard line, but the Blair Oaks JV defense came up with a turnover on downs with 5:50 to play.

The Blair Oaks JV offense had failed to score in its first three series of the game.

“At halftime, coach (Lerone) Briggs told the No. 2s that they were capable,” LePage said. “Our JV is running up and down all over people (in JV games). Why can’t we do that on Friday nights when you get your chance?”

The Falcons ran the football every time on the ensuing offense possession.

“All of them carried the ball successfully, and we had a lot of different guys blocking,” LePage said. “It was very heartwarming for us as coaches to have the No. 2s get a touchdown.”

“He’s got incredible speed,” LePage said. “He was injured to start the season, so the last two JV games we’ve put him in at running back. He’s got another gear.”

Friday night’s game was an opportunity for several Falcons to not only play, but also get a chance to make their way into the stat sheet.

The busy weekend for the Blair Oaks JV players continues Monday with a home game against Rolla.

The Falcons and their Tri-County Conference opponent normally play a varsity game Friday and the JV game the following Monday, but Versailles does not have a JV team this season. The Tigers dressed just 23 players for Friday’s game.

“Versailles called us a couple weeks ago and said (they wouldn’t be able to play a JV game),” LePage said. “We got on the MSHSAA website and Rolla was open on that date.

“Our JV is doing a really good job, their only loss is to C.B.C.’s freshman team. That’s going to be a really big game for us.”

But the most important takeaway this weekend for the Blair Oaks JV players came Saturday morning during the Falcons’ film review session. They were able to be critiqued on just as many plays as the varsity players.

“The film will be wonderful for our JV players, because they’re going to get to see themselves on film against a varsity team,” LePage said.

“They remind us of some of the teams that we’ve played that are going to line up and run right at you,” LePage said. “If you can’t stop it, they go 4 yards a play and be find with it, and they’ll continue to milk the clock.”