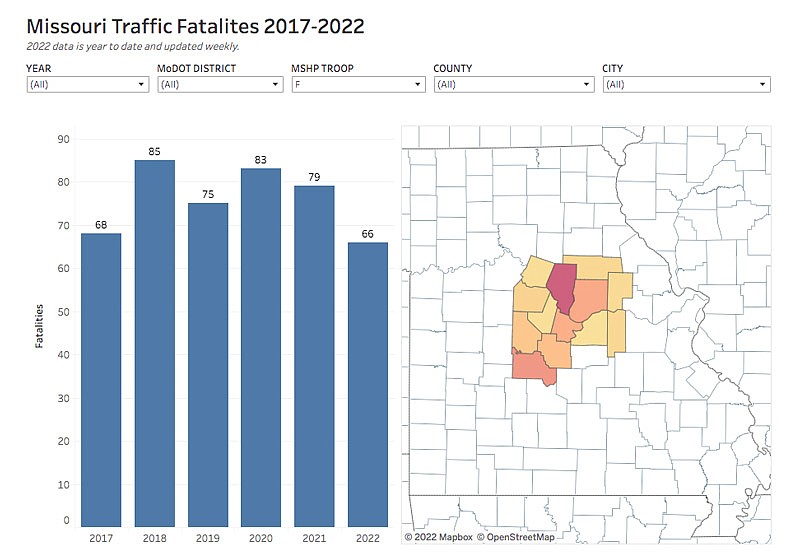 Missouri is failing when it comes to highway safety.

It was a message anyone who attended Missouri's 2022 Highway Safety and Traffic Conference was all too familiar with.

The goal those attending this week's conference sought to achieve: improve that standing.

Within the past decade, the state has received two unfavorable reports from safety advocacy groups focused on public policy and awareness. In 2017, Missouri received an "F" from the National Safety Council and an overall road safety ranking of 49 out of 51.

In 2021, 1,016 individuals were killed in Missouri traffic crashes, amounting to the highest number of lives lost on Missouri roadways since 2006, according to the Missouri Department of Transportation's strategic highway safety plan, called Show Me Zero.

"Missouri is barely treading water in terms of suppressing the number of deaths occurring on the state's roadways," the report said.

Show Me Zero cites a number of reasons why Missouri's roadways are more dangerous than other states. They include a rising number of miles driven in the state, but the report emphasized the prevalence of risky behaviors, including excessive speeds, aggressive driving, distraction and impairment. Along with choosing not to wear a seat belt, these factors account for more than three-fourths of traffic fatalities in Missouri, according to the report.

From Tuesday to Thursday, Missouri's 2022 Highway Safety and Traffic Conference brought local and national safety experts and advocates together to share practices and ideas that would help bring the number of roadway deaths down -- and with it, bring the coalition closer to its explicit goal in Show Me Zero of eliminating fatalities and serious injuries on Missouri roadways.

The in-person conference, hosted at the Holiday Inn Executive Center in Columbia, saw 500 registrants, said Jon Nelson, who helped coordinate the event and serves as assistant to the state highway safety and traffic engineer.

Attendees were able to participate in a number of breakout sessions, network, and hear from local and national experts over the course of the three days.

Brian Nevins, an environmental specialist for the Federal Highway Administration, said, "It's really important that all these different groups are able to come together to collaborate."

Nevins attended alongside Kevin Ward, division administrator at the Federal Highway Administration. The two are well-versed on the engineering side of highway safety, so they appreciated the opportunities to learn about the perspectives of those involved in enforcement and administration.

At the opening of a presentation on distracted driving, the presenter engaged the audience with personal questions.

Joel Feldman, a Pennsylvania attorney and leading safety advocate, asked the audience for a raise of hands.

Almost every hand was raised in the room of first responders, law enforcement officers and administrative support staff.

That's the problem, he said.

"The story of distracted driving is the story of hypocrisy," Feldman told them. "Until we face our own hypocrisy, we're not going to change the numbers."

He understands the trauma that can be inflicted by distracted driving.

Feldman's daughter, Casey, was walking across the street when she was hit by a 58-year-old man looking at his GPS instead of the road in 2009.

"There are two phases in my life," Feldman said. "Everything that happened before she was killed and everything after."

Missouri is one of two states without a general ban on texting while driving, though a ban does exist for people under 21. The other state without a ban, Montana, has many municipal regulations across the state. But Missouri law prevents municipalities from doing so.

Every year, Missouri gets bills to prohibit driving while using cellphones unless using hands-free technology -- this year saw nine. But legislative roadblocks have stymied them all.

This year, SB 713, which was sponsored by Sen. Greg Razer, D-Kansas City, the first distracted driving bill to make it out of a committee in four years. But it, too, fell to the same fate of its predecessors.

Feldman said one of the best ways to understand distracted driving is through the psychological framework of cognitive dissonance, where thoughts, beliefs and attitudes are inconsistent with actions.

Later in the presentation, he asked how many people in the room were parents, and the vast majority raised their hands. When he asked to keep hands raised if they'd never driven distracted with their children, there were almost no hands remaining.

"Everyone wants to protect their loved ones," Feldman said. "But there's so much we're able to do to justify the cognitive dissonance between our beliefs and our actions. But at the end of the day, every excuse has thousands of lives attached to it."

He said drivers need to fully understand and anticipate the potential costs of distracted driving: responsibility for the death or injury of oneself, a loved one or a stranger.

Feldman also advocated for defensive driving and recommended turning on airplane mode or do not disturb settings, noting only 25 percent of iPhone users have these settings turned on.

A separate presentation examined the state of Missouri's drivers education programs and its failures to prepare students for the road.

Allyn Workman, who is an executive board member of the Missouri Drivers Safety and Education Association (MODSEA), cited a number of studies showing crash and conviction rates were lower among people who'd taken a drivers education class.

Spending more time in the permit phase, which allows for more practice behind the wheel with a parent or a drivers education teacher, reduced crashes, he said.

According to data Workman obtained from the Missouri Department of Education, only 31 of the 569 public schools in Missouri offered drivers education programs. The number increases to 68 over the summer, he said.

"You begin to see where our problems start," he added. "In Missouri, we can't get to enough students to be helpful."

He pointed to a 2016 study of Missouri roadway safety conducted by the Association of National Stakeholders in Traffic Safety Education (ANSTSE), which emphasized the consequences of not requiring drivers education courses in the state.

As a local rule state, Missouri localities set their own curriculum, meaning instruction isn't standardized instruction across the state.

Even private drivers education programs can be a mixed bag, Workman said, since the qualifications required to open and run these programs are low. You only need a driver's license and a business license.

Workman hopes to strengthen MODSEA's membership. A former leader in traffic safety education, MODSEA helped found a national group, which saw five of its presidents hail from Missouri. It has hosted the national conference three times.

But with membership waning, MODSEA isn't able to be on the leading edge of drivers education, Workman said. He also hopes to pursue a standardized, statewide curriculum that is more accessible to Missouri students.

Lieutenant to peers: Enforce traffic laws for commercial vehicles, too