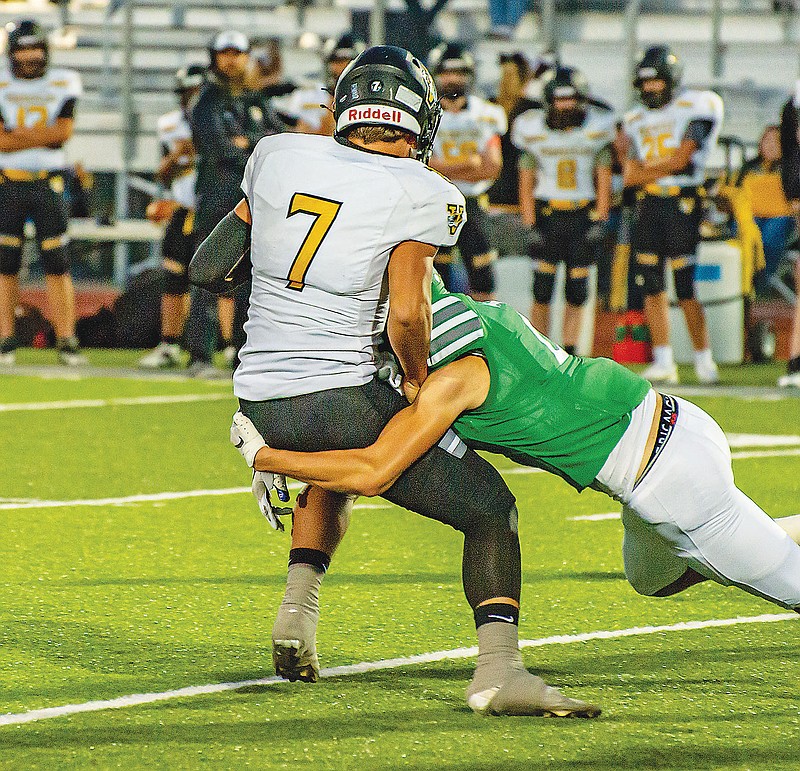 WARDSVILLE -- It only took the Blair Oaks Falcons just 4:07 into Friday night’s game to score a touchdown in all three phases.

Dylan Hair had a 50-yard rushing touchdown, Bryson Varner had a 31-yard fumble return for a touchdown and Joey Wilde returned a kickoff 60 yards for a score in those opening minutes, propelling the Falcons to a 65-6 Homecoming victory against the Versailles Tigers at the Falcon Athletic Complex.

“That was a really good shot in the arm for every phase of our football team,” Blair Oaks coach Ted LePage said.

Prior to Wilde’s touchdown, Versailles had a high snap on a punt attempt bounce out of the back of the end zone for a safety.

Blair Oaks jumped out to a 23-0 lead with 7:53 left in the first quarter, and the offense had only been on the field for three plays.

Wilde’s score was Blair Oaks’ first kickoff return for a touchdown since Zach Herigon returned a kickoff 81 yards for a score in last year’s regular-season finale at School of the Osage.

“Coach (Andrew) Terpstra set an extra-special goal for them, saying he wanted them to return a kick for a touchdown,” LePage said. “People don’t kick to us usually, so when they kicked it to us, Joey got a good lane and took it back.”

The Blair Oaks defense met Versailles running back Tye Edgar in the backfield for what would have been a 5-yard loss, but before Edgar was tackled, Varner stripped the football from Edgar’s hands and ran it into the end zone for the Falcons’ second defensive touchdown of the season.

“He’s so much more intense,” LePage said of Varner. “He’s making tackles, but when he makes tackles, he’s reaching to grab the football. Last week, he made a couple of tackles where he was grabbing at the football and the guy went down.”

The next time Blair Oaks’ offense took the field, Hayden Lackman scored on a 4-yard touchdown run to extend the lead to 30-0 with 4:10 still to go in the opening quarter.

Lackman added a 5-yard touchdown run with :10 left on the clock in the first quarter. Nick Closser snagged an interception -- the Falcons’ sixth straight game with an interception -- on the second play of the second quarter, then two plays later, Zack Prenger scored on a 6-yard jet sweep to the left. That stretched the lead to 44-0 with 10:41 to go in the first half.

Lackman scored his third touchdown on a 33-yard run less than three minutes later for the Falcons’ final score of the first half.

Versailles avoided a shutout with a touchdown in the final minute of the first half. Facing third-and-2, Ty Ollison threw a 14-yard touchdown pass to Tristan Albrecht. The 2-point conversion run was no good and the Falcons went into halftime with a 51-6 lead.

The Blair Oaks first-string offense returned for one drive in the second half. Hair pump-faked a short pass, then threw deep along the sideline to Wilde for a 35-yard touchdown pass with 7:57 left in the third quarter.

The second-string offense accounted for the Falcons’ final touchdown. Six players carried the ball on an eight-play, 68-yard drive that ended with a 10-yard touchdown run by Warren Davis. Nolan Laughlin added his ninth extra point of the game with 1:55 to go in the fourth quarter.

Laughlin also recovered a fumble in the second half for the Falcons’ third takeaway of the game.

Blair Oaks finished the game with 353 yards of total offense. Hair completed 8-of-10 passes for 138 yards, while Lackman was the team’s leading rusher with five carries for 53 yards. Adam Hall led all receivers with three catches for 50 yards.

Versailles ended the game with 94 total yards of offense — 32 yards rushing and 62 yards passing. However, the Tigers did not have a first down while the Blair Oaks first-string defense was on the field.

“They have run the ball successfully the last two weeks,” LePage said of Versailles. “We felt really, really good at halftime about the way we had shut down their run game.”

“They have a really good quarterback,” LePage said of Eldon. “They’ve got a really nice running back, and they’re big, really big.”