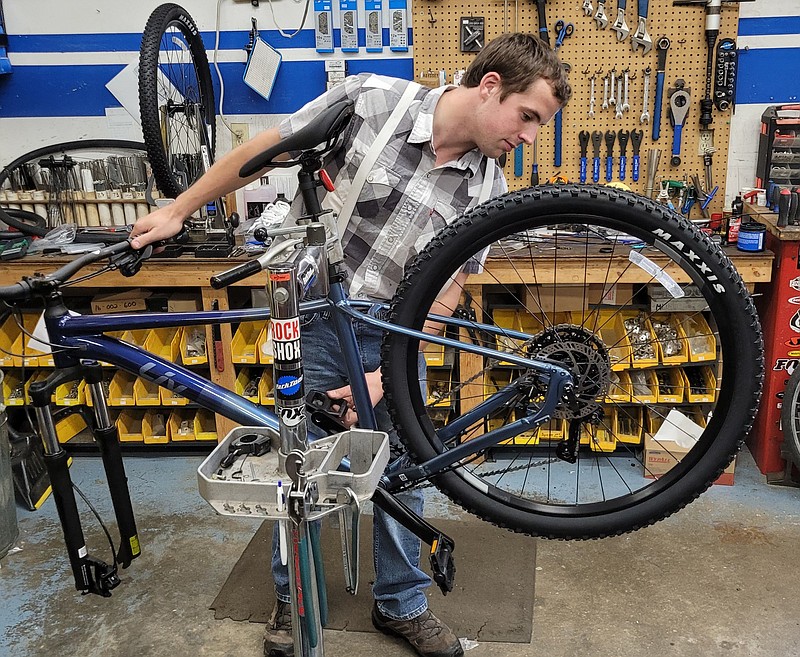 Since 1974, the Hoover family has sold and maintained bicycles for the Mennonite community and recreational bicyclists living in and around Versailles.

More recently, this business has entered into a new generation of ownership within the family, continuing to sell and maintain bicycles at its current location in the Morgan County community of Hopewell (Barnett area) under the ownership of Josiah Hoover.

Despite his youth, Hoover has been able to achieve the dream of becoming a successful small-business owner while embracing the opportunity to deliver an important service in the Mennonite community where he resides.

Born in 1999, Josiah Hoover was raised near Excelsior as an Old Order Mennonite of the historic Groffdale Conference. This group, though using electricity and limited other modern conveniences, dresses in plain clothing and predominantly uses bicycles and black horse-drawn buggies as their means of transportation.

His paternal grandfather, Hoover said, left his home in the vicinity of Lancaster, Pennsylvania, in the late 1960s and moved his family to Mid-Missouri.

"I am the youngest in my family and have two brothers and two sisters," Hoover said. "Growing up, I attended the Prairie Union School -- a Mennonite school -- and finished there in the eighth grade."

In recent years, through the encouragement of their father, Hoover and both of his brothers have gone on to continue their studies, earning high school general educational diplomas.

He continued, "My father, Lewis, first opened the bicycle shop just outside the city limits of Versailles in 1974, but later decided to move the business into town. My father eventually sold the business to my older brother, Mark."

The bicycle shop, which now operates under the business name "World of Wheels," was moved to the Hopewell community south of High Point in 2005. In the years prior, the building in which they set up their new shop had housed an automotive repair business.

Hoover recalls going to the shop to assist his brother after school, learning the detailed and tedious aspects of working on many styles of bicycles. Additionally, he was introduced to the traits necessary to be of assistance to customers who might be considering the purchase of a new bicycle.

"I started working full-time at the shop in 2014," he recalled. "I guess you could say that I just kind of fell into it." Grinning, he added, "There was always that dream of mine to one day own it and this somehow turned into a reality."

His older brother soon began to focus on another business venture and opened Hoover Surplus near the bicycle shop. In January 2020, when only 20 years old, Josiah became the new proprietor when purchasing the World of Wheels from his brother.

"It was really something of a natural progression since my brother found something else that he wanted to pursue. But then COVID began to hit shortly after I purchased the business and had an impact with regard to supply chain issues," he said. "The lead time on getting new bicycles and repair parts became a concern, but little by little, everything has started to improve."

Another important milestone in his young life came on Dec. 16, 2021, when he married Bethany Martin. The couple grew up on opposite ends of their Mennonite community, but became acquainted through various youth activities and events. They now reside in a home on the same property as the business and are members of the Mennonite congregation at Hopewell Church.

Many of his fellow Mennonites embrace bicycles as their primary means of transportation, but as Hoover estimates, they comprise only about half of his overall sales. With few bicycle shops in Mid-Missouri, much of what he stocks at the shop is related to recreational biking.

When discussing the lifestyle of the Mennonites, Hoover said his mother has been an important role model throughout his life and an inspiration in his journey of faith.

"My mother is very rooted in the faith of the Old Order Mennonites and she has definitely been an influence to me," he affirmed.

There have been some changes in the simplistic nature of bicycling in recent years that include the addition of electric bicycles, the latter of which he has begun to stock at his shop. Additionally, the summer months often become a hectic period at the store since people are more inclined to spend more time outdoors, but this does not diminish his enjoyment of being a business owner.

"It is all something that I have come to appreciate because it allows me to interact with many different customers on a daily basis," he said. "The service side of the business does have its challenges at times, yet can really be rewarding as well."

With a grin, he added, "This may be the only thing that I really know how to do, but it is career that has deep roots in my family and is a service that I am happy to be able to continue to provide."