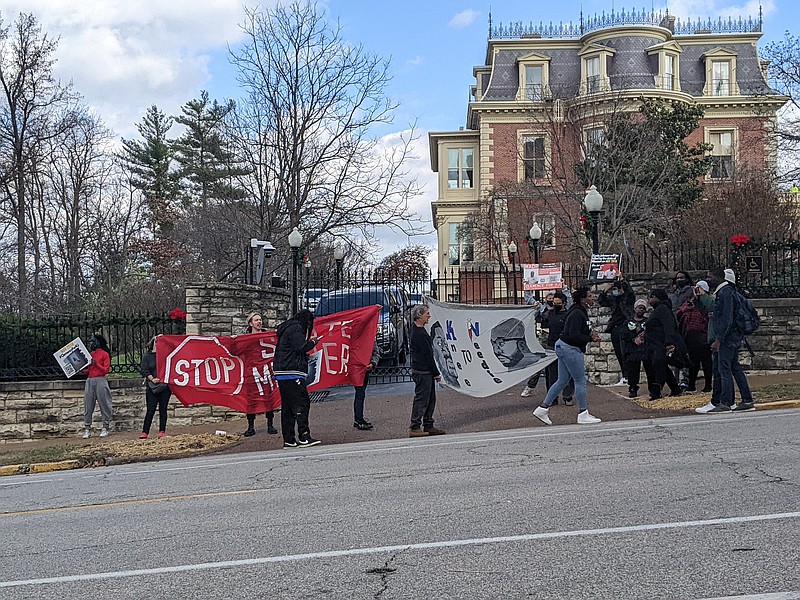 Ryan Pivoney/News Tribune photo: A crowd of protesters gather outside the Missouri Governor's Mansion Tuesday, Nov. 29, 2022, to contest the state execution of Kevin Johnson. Johnson was given the death penalty for shooting and killing a Kirkwood police sergeant in 2005.

The state execution of Kevin Johnson generated two consecutive days of protest in the Capital City.

Roughly 50 people gathered before noon Tuesday at the Missouri Governor's Mansion to condemn Johnson's execution, which took place about seven hours later at the correctional center in Bonne Terre. On Monday, civil rights and faith leaders gathered at the Missouri Supreme Court to plead for Johnson's life.

The Missouri Supreme Court on Monday denied a request to halt the execution, despite a special prosecutor arguing before the court that Johnson's sentencing was rooted in racism. Gov. Mike Parson, a Republican, issued a statement indicating the state would carry out the execution hours before the court's ruling.

Johnson was given the death sentence for the 2005 murder of Kirkwood police Sgt. William McEntee. Johnson, who was 19 at the time of the murder, believed McEntee was responsible for the death of his 12-year-old brother because police completed a search before assisting the juvenile who had a seizure and collapsed. Johnson shot and killed McEntee hours later as the officer responded to a different call for service.

Tuesday's protest outside the governor's mansion was designed to ensure Johnson's execution "didn't go down quietly," said Justice Gatson, who traveled from Kansas City to join.

The crowd carried signs created by Missourians for Alternatives to the Death Penalty, which crafted a campaign to bring attention to Johnson's case, and shouted "No justice, no peace, no racist police" and "An eye for an eye makes everyone blind."

Gatson said she wasn't advocating for the state to release Johnson, just to not kill him.

"We're not saying let Kevin go, but we are saying, let's spare his life, let's give him clemency and let him spend the rest of his life in prison," she said. "But let's not kill in the state's name. That's not what we want. We do not think that this is justice. Kevin was 19 years old when he was sentenced to die, and we know that there were a lot of racial implications in his case."

Marcus Hunt said he was spurred to join Tuesday's protest at the governor's mansion because he has an "aversion to injustice." He said the state should halt the execution while Johnson's case is reviewed further.

"We're talking about an instance that's nuanced," Hunt said. "It's not an instance of this thing happening and that's the only thing we need to talk about; we also have to talk about the history of mistreatment of individuals that are a certain color or a certain poverty rank."

"What brought me out here today is that I know something is wrong and something needs to be done about it," he continued. "These people that are elected to serve us and dole out punishments don't do so with an understanding of the will of the people."

The gathering, which attracted the attention of the Jefferson City Police Department and the governor's security detail, ended peacefully shortly after moving to First United Methodist Church at the corner of Monroe Street and Capitol Avenue.

The police department, which had at least eight officers on the scene at one point, threatened to arrest protesters if they spilled into the streets. No arrests were made.

In the accompanying video, protesters and police officers confront each other outside of First United Methodist Church.

Missouri man put to death for killing police officer in 2005

In an earlier video, supporters of Kevin Johnson gather to protest at the Missouri Capitol. 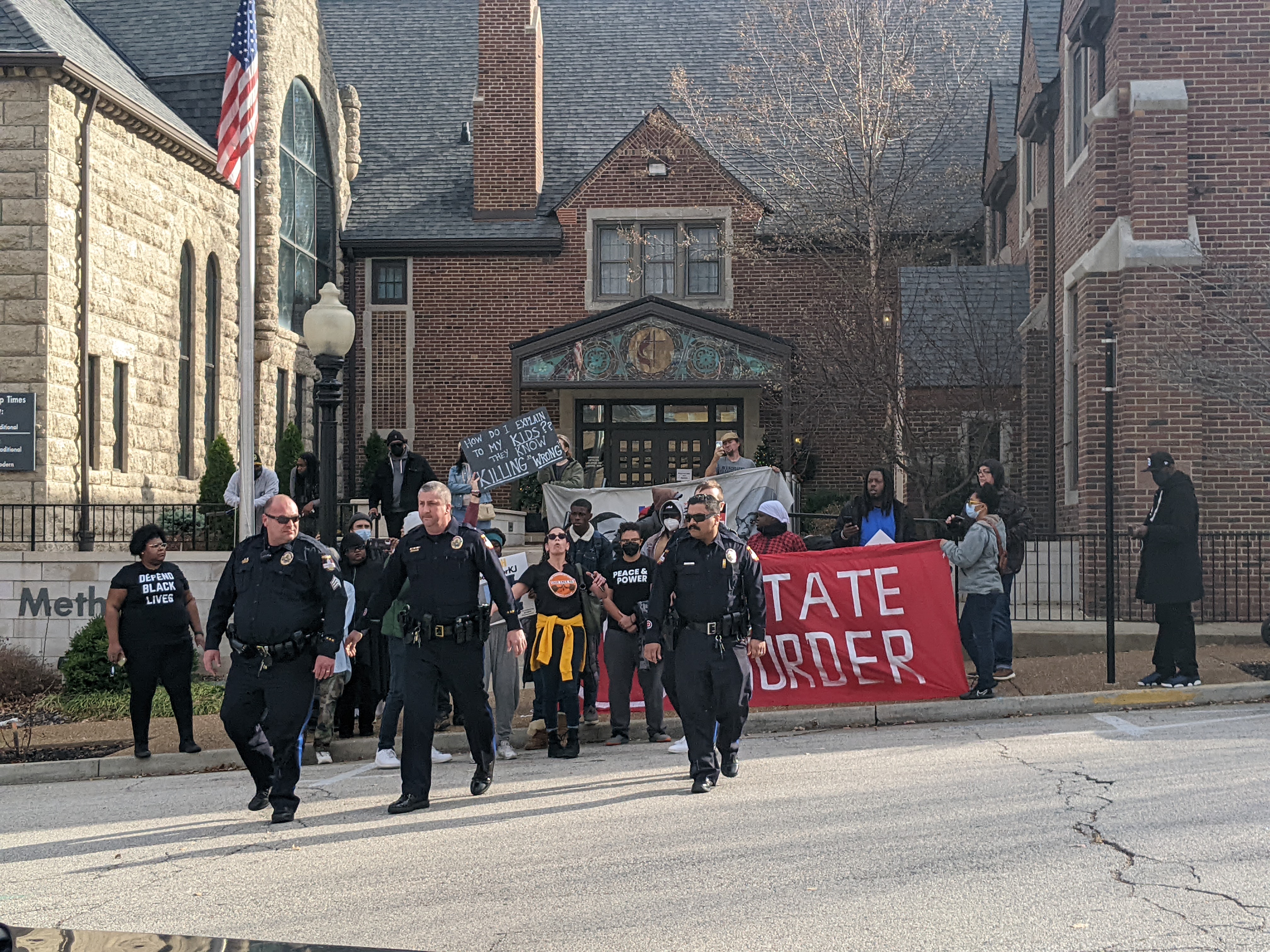 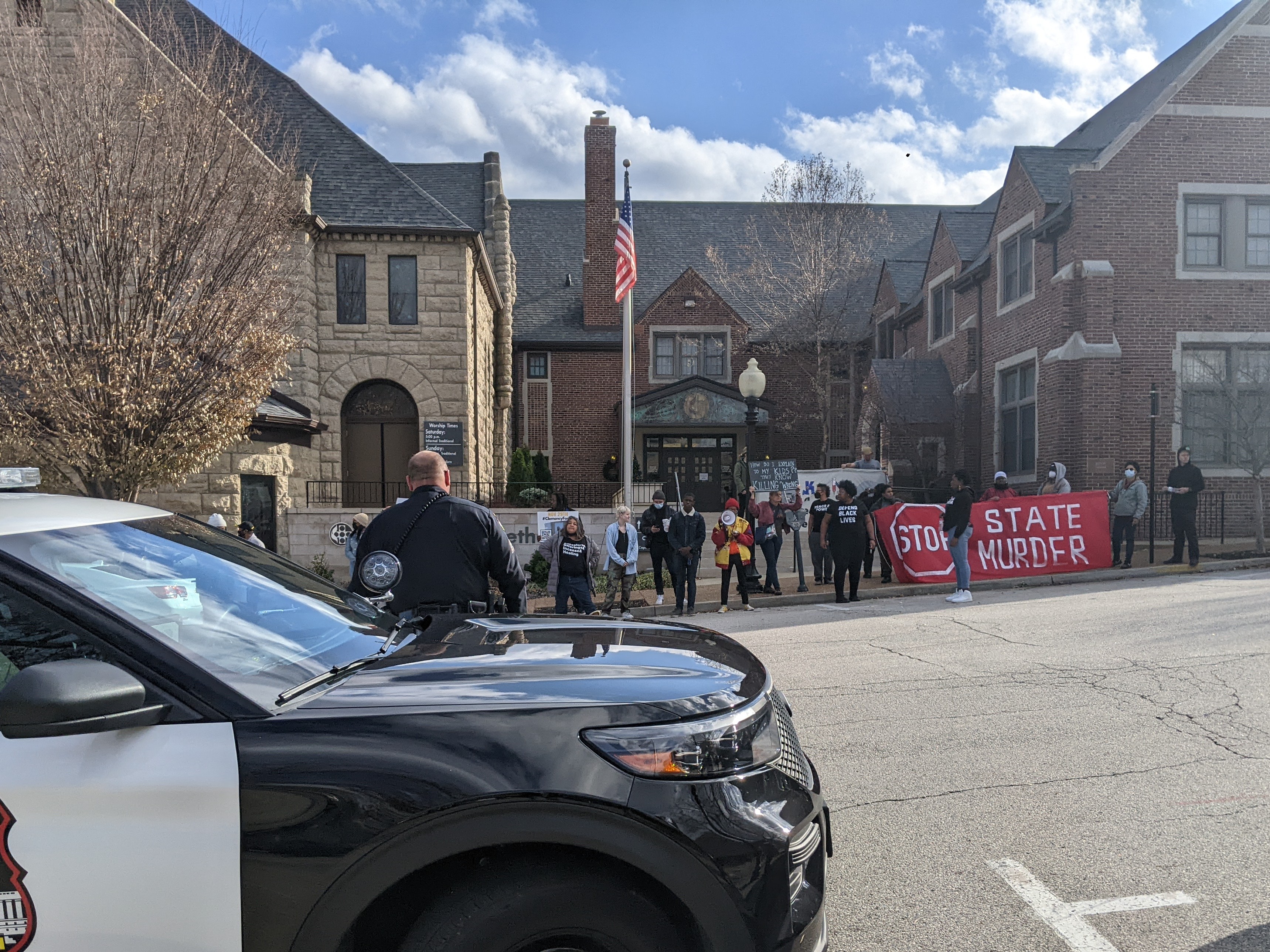 Ryan Pivoney/News Tribune photo: On Nov. 29, 2022,Jefferson City Police Department had officers monitoring the protest over the state execution of Kevin Johnson, which traveled from the Governor's Mansion to First United Methodist Church. The department had at least eight officers on the scene at one point. The Missouri Highway Patrol was also monitoring the protest activity. 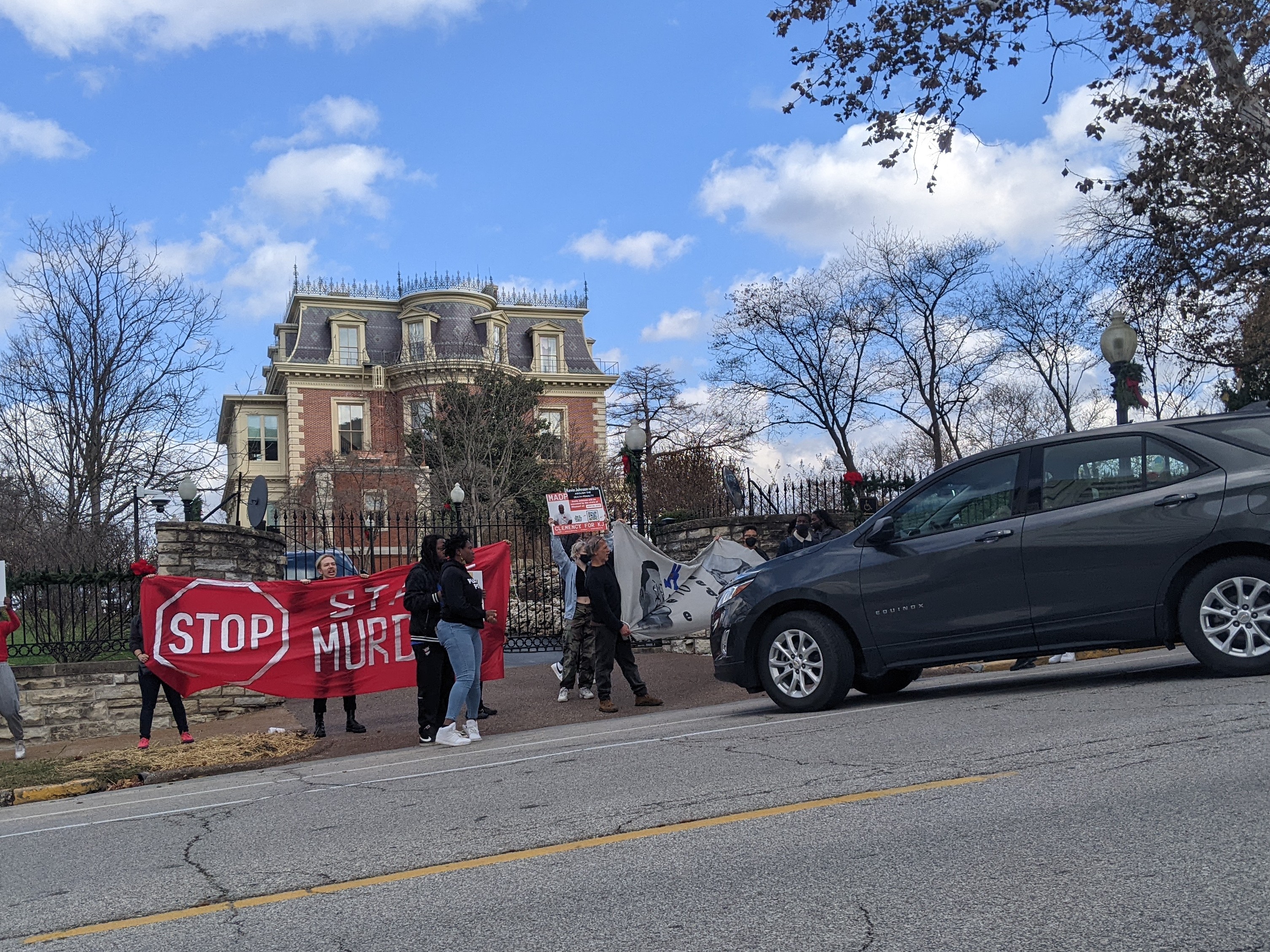 Ryan Pivoney/News Tribune photo: The protest Tuesday, Nov. 29, 2022, over the state execution of Kevin Johnson prevented at least one vehicle from entering the gate to the Missouri Governor's Mansion from Capitol Avenue.

Julie Smith/News Tribune photo: Following the Missouri Supreme Court's decision to deny the stay the execution of Kevin Johnson, about 30 protestors showed up Tuesday, Nov. 29, 2022, at the Governor's Mansion in Jefferson City before moving to the steps and sidewalk of the First United Methodist Church in the 200 block of Monroe Street. Several were holding signs and banners, one comparing Michael Floyd to Kevin Johnson that read "knee to needle" with drawings of each man on either side of the banner. Law enforcement showed up en masse but dispersed before the group eventually boarded a bus to return home.