Helias wrestling not bothered with move up to Class 3 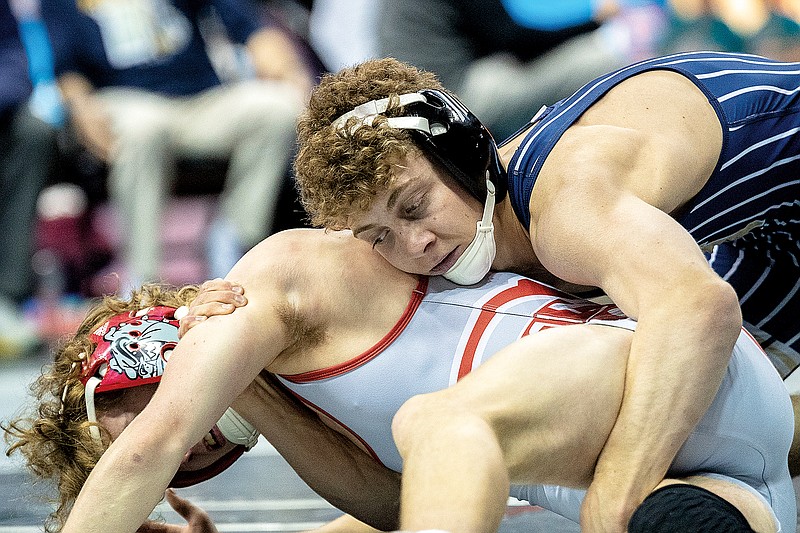 Moving up a class?

“We had to make a change, so you adapt to that to make it work,” Helias coach Weston Keleher said as the Crusaders prepared for today’s tri-dual against Warrenton and Hannibal in Warrenton. “I believe we would have been competitive last year in Class 3. We wrestled a lot of those teams last year and we did just fine.”

Helias finished second in the Class 2 state tournament last season and was bumped up to Class 3 because of MSHSAA’s championship factor for non-public schools.

“We’ve never changed our schedule when we dropped to Class 2, we did good against Class 3 teams in duals and tournaments,” Keleher said. “I don’t think that’s being cocky, it’s just looking at what we’ve done. We’re going to be OK.”

Prenger, a senior, will miss the first month after being injured in the offseason.

“He’s a super tough kid, he’ll get through this and we believe he will be competing for a state title in February,” Keleher said.

Prenger figures to fill the spot at 126 when he returns.

Logan Montoya, a junior, finished third last season at 160. Keleher knew Montoya entered last season under the radar, but his success has him firmly in the spotlight this year.

“That surprise factor is out the door now that he’s shown everybody how talented he is,” Keleher said. “When the lights get brighter, Logan gets better.”

Drake Perkins, a junior, was fourth at 170 last season.

“We look to carry over his great finish to the season into this year,” Keleher said.

Montoya and Perkins will fill the spots at 165 and 175 this season.

Carson Hayes, a senior, qualified for state at 138 last year. He will start the season at 150.

“Carson is a really tough veteran kid who will give it all that he’s got,” Keleher said.

Jace Duemmel, a senior, was a qualifier at 145 last season.

“He’s put in a lot of work over the summer and I think he’s going to surprise some people,” Keleher said.

Aleksandr Careaga, a starter at 106 for much of last season, will wrestle at 120 in his sophomore season.

“He’s put on some muscle and improved a lot,” Keleher said.

Parker Lock, a junior who sat out last season, will start at 106.

“He saw some action for us last year and he’s ready to wrestle full-time,” Keleher said.

“He wrestled a lot during the summer and he proved that he’s the one at that weight class,” Keleher said.

Jordan Fincher will hold down the spot at 138.

“He’s super tough on his feet,” Keleher said. “He’s not going to be intimidated out there.”

The Crusaders have nearly 40 wrestlers out this season.

“We keep getting better and better because we keep reloading,” Keleher said. “The more guys we get out, we are going to continue to benefit from that.”

Keleher is entering his fifth season as head coach at Helias. He thinks this team has a chance to be special.

“There hasn’t been a day in practice that we haven’t worked hard to get ready for this season,” he said.

There are two tournaments new to the schedule this season -- Jan. 13-14 at Branson and Jan. 28 at St. Michael the Archangel.

Helias will open its home schedule next Tuesday in a dual against School of the Osage before hosting the Missouri Duals on Dec. 9-10.