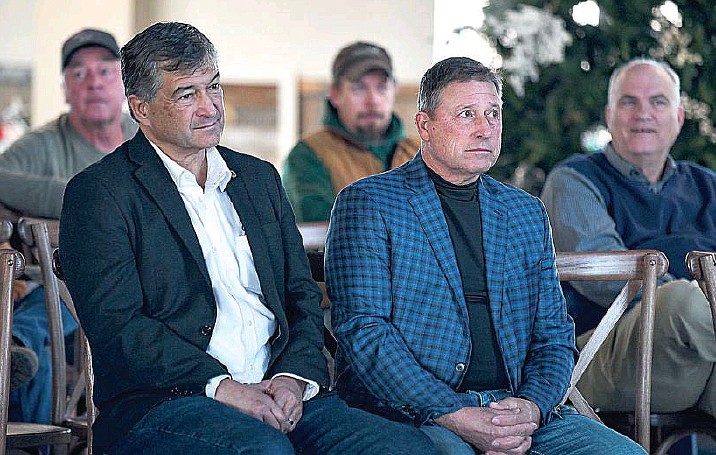 Management of flood risks in and around Jefferson City may look completely new depending on the results of a three-year partnership between the state and Army Corps of Engineers.

Repeated flooding events in 1993, 2011 and 2019 led the Missouri Department of Natural Resources and Army Corps of Engineers to partner on a flood risk mitigation feasibility study, signed into action Monday.

Jefferson City is one of three areas in the state where solutions to prevent Missouri River flooding will be assessed.

"I think this is an important step in trying to provide support for tangible improvements and learning from past floods in a way that doesn't just repeat the same cycle," DNR Director Dru Buntin said.

Danny Baumgartner, owner of the Capital Bluffs Event Center that's less than two miles away from the Missouri River, said he was "thrilled" about the study partnership.

"We know there has to be something done, but we're not for sure exactly what to do," he said.

The tops of golf course greens were the only part of Baumgartner's property that could be seen during the 2019 flood. He said they looked like "a bunch of little islands" for weeks as the water settled. Building regulations required him to put the structures on his property above flood levels.

Baumgartner worked with other landowners in the area and the levee district to build a small levee around his property out of pocket.

"It's semi-protection," he said. "It's not as much protection as we want."

Monday's ceremony kicked off the third approved site-specific study related to a larger assessment looking at flood mitigation in the lower 735 miles of the Missouri River. The long-term study, started in 2019, is the first time in a generation the Army Corps of Engineers is reviewing the application of its flood risk authority, Rayfield said.

Buntin said the partnership was a team effort between state and federal officials.

Amid the 2019 flooding, Gov. Mike Parson issued an executive order to convene an advisory group to look for "innovative solutions" to break a cycle of recurring floods, Buntin said.

That produced a partnership between the Army Corps of Engineers and the states of Missouri, Iowa, Kansas and Nebraska to create the long-term flood mitigation study on the lower Missouri River basin.

Public input over the past couple years was used to determine the three locations for the site-specific studies, Buntin said.

The localized "spin-off studies," taking place in Jefferson City, Holt County and Brunswick, are intended to provide "a fresh, more targeted look at our local area and this specific site on the Missouri River," Rayfield said.

"Holt County, Brunswick and Jefferson City are three locations where we know we've had repetitive problems and know it makes sense to study and look at alternatives now," he said.

He said he's expecting to implement solutions in a more timely manner than previous attempts because the site-specific studies are happening in conjunction with the larger river system study, whereas before they were done after the larger plan was formed.

And the state is involved, which he said is also different from previous attempts.

"The state is agnostic about what the project that is going to come at the end of the day is," Buntin said. "We're here to provide the funding support and the technical support for the ideas that you all have but this has to be your project."

Part of that technical support involves partnering with researchers from the University of Missouri to collect public input on plans. They've already begun gathering feedback from residents, and land and business owners, who have expressed different priorities based on proximity to the Missouri River.

People on the north side of the river tend to experience river flooding effects directly, Buntin said, while people south of the river largely avoid those impacts, besides some inundation to local creeks.

Based on public input so far, Buntin said, residents on the north side of the river (in Cole County) have expressed more urgency for action. City residents indicated they're concerned about businesses, particularly Capital Sand Company and Hitachi Energy, while more urban and suburban parts of county view the river as an opportunity for economic and recreational development.

Rayfield said the difference in comments indicates to the Army Corps of Engineers that the proposed solution needs to be adaptable and has meaning on both sides of the river.

"You can't have a solution for the south side without accounting for the north's interests, and vice-versa," he said.

Construction of an L142 levee also proved to be a controversial solution, according to public feedback. Some hope its construction comes to fruition while others were "vehemently opposed to any reconsideration of L142," Buntin said.

Plans for the L142 levee were revised multiple times in the early 1990s before the Corps of Engineers diverted funding away from the project. Plans for the nearly 16-foot high levee were continually reduced, according to a 1994 report from the U.S. Department of Interior. The length of the proposed levee went from 6.4 miles to 5.4 miles, then 4.6 miles, then 3.3 miles with another levee project accounting for another 1.3 miles.

Buntin said there was a lack of local consensus on the project and what impact it would've had on local creeks.

"We're going to look at all of those types of things and the ideas that people have, and we'll be able to see how would that have performed in a 2019 event," Buntin said.

"I think it's going to be a new project," he continued. "It's not going to be a reiteration of past ideas that weren't able to be implemented because we want to be able to make sure we have enough excitement and support for the project that we can actually achieve implementing it as well."

Rayfield said potential solutions may include moving levees back from the river, increasing the size of levees or non-structural solutions, such as expanding wetlands in the area. He noted that several employees in the Kansas City District live and work in Jefferson City and have a vested interest in creating a working solution.

Rayfield said initial responses from stakeholders have led him to believe the L142 levee is "not a leading solution" at this time but that could change.

The MU researchers are still collecting public input. Once that wraps up, the comments will be formatted into a report that will be used to identify flood mitigation solutions that will be considered.

State leaders and Rayfield remarked on the strong desire to include all stakeholders in flood mitigation.

"We have to be all on the same page. We're not going to be initially, I assure you that," Buntin said. "It's going to be a give and take. Not everybody is going to get what they want in the final analysis of this, but everybody needs to respect each other, and they need to engage and hear each other's perspectives because you can't expect somebody to do something that they don't see as in their interest."

Kehoe, who recalled seeing cars float on the parking lot of the Ford dealership he owned amid the 1993 flood, said he understands the effect flooding can have on local business owners. It's why he wants them to be involved with flood mitigation planning.

"We don't want to leave anybody out," he said. "We know we're not going to make everybody happy, but at some point in time, we have to figure out how to deal with what's real."

"This is a big step because now the Corps and DNR can do their job and by doing their job, they can come back and report to all the landowners here and let them know that there's some different options," Baumgartner said. "It may not be exactly what I want all the way, but it's going to be better than what I have now."