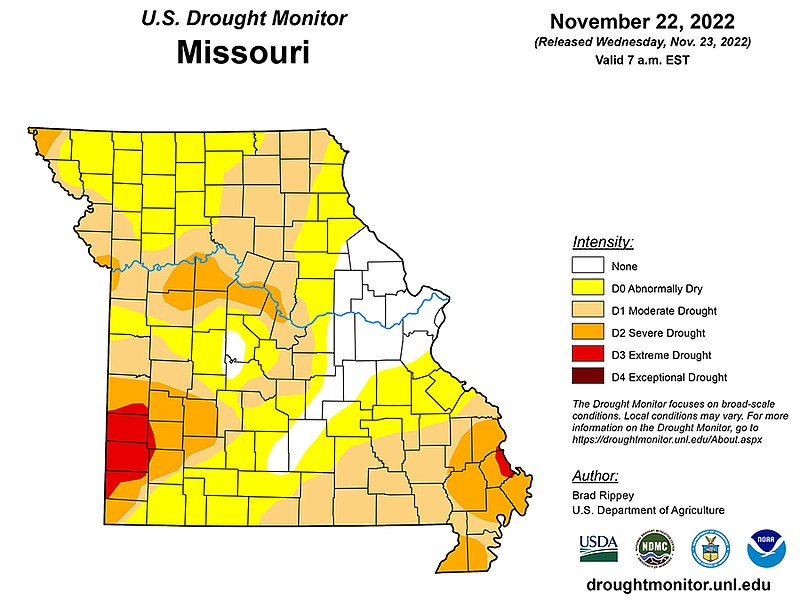 The Republican governor originally issued a drought-related executive order in July, declaring an alert for 53 counties through Dec. 1. Monday's action pushes the end of the alert to March 1, 2023, and allows state agencies to continue assisting those experiencing the drought's negative effects.

"It will take a lot of precipitation to help Missouri recover from the current water deficit," Parson said in a news release Monday. "Water for livestock is just as important in the winter as it is in the summer, and we want to ensure resources are available to our farmers and ranchers that may need them. Additionally, with navigational challenges forming on Missouri's rivers affecting barge traffic, extending our Executive Order is necessary to support continued mitigation efforts."

Nearly 90 percent of Missouri is experiencing abnormally dry conditions and 36 of the state's 114 counties remain in severe or extreme drought, according to the governor's executive order.

Drought conditions are not expected to substantially improve over the winter, according to the Drought Assessment Committee formed by Parson's July executive order.

Monday's executive order allows state agencies to continue offering the specialized resources that began in July to mitigate the impacts of drought.

Over the summer, the state began allowing farmers to access water and hay from state parks and conservation sites, as well as obtain free hauling permits to transport hay around the state more easily.

The Commercial Navigation Impact Team is also being convened as a result of low water levels on the Missouri and Mississippi rivers. Diminished river levels are making it difficult for commercial navigators and barges to maneuver, according to the governor's office.

The Missouri Department of Natural Resources is collecting public reports and photographs through its website to assess drought conditions around the state.