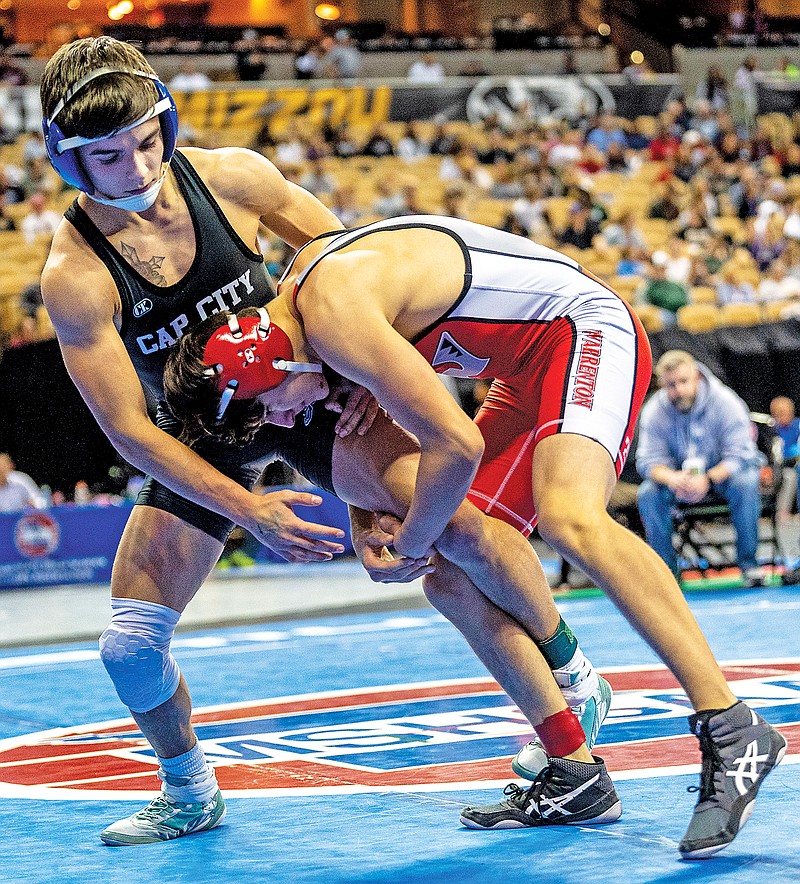 This season, Capital City coach Mitch Werdehausen said he is more focused on what happens during matches than the end result.

“We had a great core group of seniors who all worked hard and were great to have in the room,” Werdehausen said of last year’s team. “My goal for the team this year is I want maximum effort and don’t worry about your wins and losses. If you give me maximum effort and fall short, I can’t be mad at you for that.”

Four wrestlers with state experience return to the team this season, led by senior AJ Kempker, who was one win away from a state medal in the 120-pound bracket last year. Kempker will move up to 126 pounds to start the season.

“He almost placed last year, was one match away,” Werdehausen said. “He’s a very strong kid and he’s always working hard in the room. He has a focus to hit another goal this year.”

Senior Eli Jenkins won one match in the 160-pound state bracket and Werdehausen said hopefully he will wrestle down at 150 this season.

Senior Hurley Jacobs returns to take the Cavaliers’ 215-pound spot in the lineup with state experience from wrestling in the 182-pound bracket in 2020.

“We have three guys in there with state experience, which helps bring up the team and give them something look for,” Werdehausen said. “They set a goal for the rest of the team. The team sees those guys working and sees that if those guys can do it, they can too. … It takes good practice partners to make it to state and I think we have a pretty solid room of practice partners.”

Eli Schuemann, a senior who was a state qualifier at 132 last year, will not wrestle this season because of a shoulder injury. Werdehausen said he continues to be a team leader at practice and expects his presence to encourage his teammates.

Those four will be joined in a lineup with some adjusted weight classes starting this season by junior Austin Feely either wrestling at 113 or 120, sophomore Demarkus Lyddon-Allen taking 132 and junior Bishop Boyd wrestling at 138. Sophomore Levi Casey will wrestle for Capital City at 144 pounds, and sophomore Matthew Wiegand will take the 190-pound spot while sophomore Reyce Turner will wrestle at heavyweight.

“Austin Feely has been varsity ever since he was a freshman, he’s fun to be around,” Werdehausen said. “Bishop Boyd has put in a lot of work in the offseason, he’s probably going to be low on the radar for a lot of people. Matthew Wiegand, he was a freshman last year and wrestled a lot of JV matches, had a good record on JV, hopefully he can put that in play on the varsity side as well.”

“All of them have varsity experience from last year,” he said. “… They’re young, but they know what to expect when they hit the varsity mats.”

Those wrestlers are part of a program that has built to 40 competitors in just its fourth year. Werdehausen said though the amount has forced him to split practices to twice a day to make sure everyone gets the proper attention, he is happy with the total.

“We’re going in the morning with varsity and JV in the evening,” Werdehausen said. “We’re kind of limited on our wrestling space. They’re practicing hard and varsity is getting some more one-on-one coaching with the smaller room setting, so it’s working out to benefit us. … Our goal is to maintain around 30 to 40 kids.”

Capital City will begin its schedule with a triangular against St. James and Potosi today at St. James, that once again involves the Fort Zumwalt North Invitational, the Missouri Duals, the Capital City Tournament and the Hickman Tournament. Werdehausen said the Cavaliers essentially added the Hillsboro Tournament this season after not participating last year because of sickness in the program.

“That’s back in there, Hillsboro is one of the top teams in the state,” Werdehausen said. “We added the Liberty Invitational as well at the end of January. I want to expose my guys to really good competition. Hillsboro is the top of Class 3 and Liberty is the top of Class 4. We wanted to go to those and get the guys some experience and set the bar where they need to reach.”

The Cavaliers will wrestle in Class 3 District 4 this season, along with Helias and Jefferson City, both of which Capital City will have Central Missouri Activities Conference duals against and will see in tournaments in the regular season.

“They want to compete, they’re ready to hit the mats, so that’s a good sign,” Werdehausen said. “They’ve been watching their weight for a while now and they’re ready to get some live competition against some other people. They want to showcase some skills they got over the summer because a lot of our kids worked pretty hard over the summer and a couple of them went to some national tournaments.”