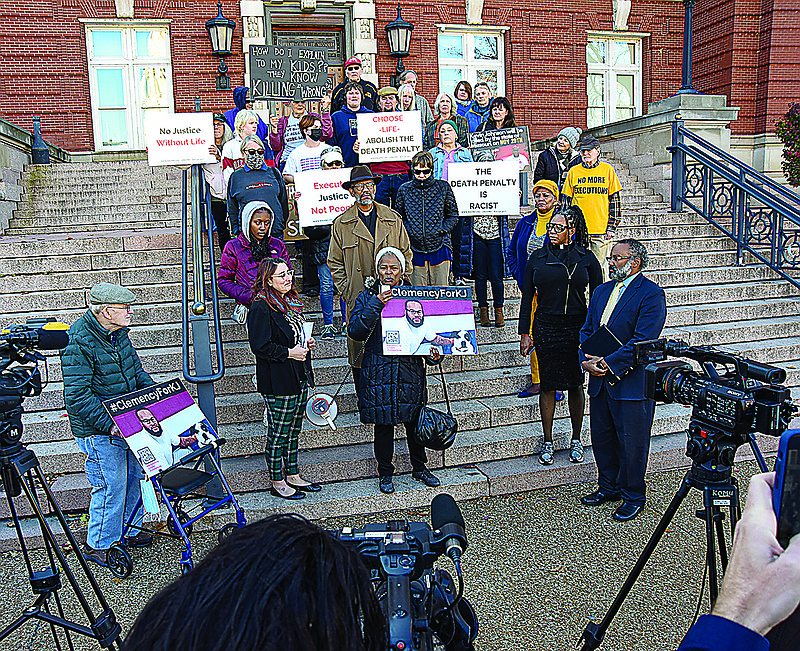 About two dozen people gathered Monday outside the Missouri Supreme Cour to protest the planned execution of Kevin Johnson, who is to be put to death at 6 p.m. today.

Missouri plans to execute Kevin Johnson Tuesday despite a special prosecutor’s request to halt the execution because he alleged Johnson’s case was tainted by racism.

With Johnson scheduled to be put to death at 6 p.m. today, the Missouri Supreme Court on Monday heard expedited oral arguments in an unprecedented final attempt to stay his execution for the 2005 murder of police sergeant William McEntee when Johnson was 19 years old. Johnson had felt McEntee was responsible for the death of Johnson’s 12-year-old brother.

In a 5-2 per curiam decision, the court overruled the motion to stay the execution, upholding previous rejections of “constitutional error” due to racial discrimination, according to the court’s opinion, which was released almost eight hours after oral argument concluded.

In October, St. Louis Circuit Judge Mary Elizabeth Ott appointed Keenan to review the case. Keenan filed a motion to vacate the death sentence, stating that race played a “decisive factor” in the death sentence. But in a ruling Nov. 16, Ott denied the request. The two-sentence order didn’t state why.

Keenan said his investigation revealed former St. Louis County Prosecutor Bob McCulloch’s office handled five cases involving the deaths of police officers during his 28 years in office. McCulloch sought the death penalty in the four cases involving Black defendants, but did not seek death in the one case where the defendant was white, Keenan said.

Both Keenan and Luby sought to ensure this evidence was thoroughly considered before putting Johnson to death.

Assistant Attorney General Andrew Crane upheld the previous court’s decisions and said evidence of racial bias wasn’t present. He argued the state shouldn’t have to wait on those claims to be resolved before executing Johnson.

“The fact of the matter is that cases can be pending while an execution proceeds,” Crane said.

As the Supreme Court considered Johnson’s request and questioned the attorneys, Gov. Mike Parson issued a statement which “confirmed that the state of Missouri will carry out the sentence.” This confused many on social media who voiced their incredulity at the statement’s release before argumentation had even concluded.

On Sunday, a federal judge barred Johnson’s 19-year-old daughter, Corionsa “Khorry” Ramey, from witnessing her father’s execution. She had sought to challenge a Missouri law barring people under 21 from witnessing an execution.

A day before Johnson’s scheduled execution date and an hour before the last opportunity to fight it, civil rights and faith leaders held a rally and press conference to plead for Johnson’s life.

The Monday afternoon rally, which was organized by Missourians for Alternatives to the Death Penalty (MADP), the state NAACP, and the Progressive National Baptist Convention, brought around 30 people to the front steps of the Missouri Supreme Court building.

Elyse Max, co-director of MADP, said, “It’s unprecedented in Missouri that we have a prosecutor asking the state to stop an execution, to look at new evidence that could show there was racial discrepancy in the prosecution of Kevin Johnson. That evidence deserves to be heard.”

Speakers included: Missouri NAACP President Nimrod Chapel; Jamala Rogers, a member of the Organization for Black Struggle, which is a member partner of the MADP coalition; and Johnson’s spiritual adviser, the Rev. Darryl Gray.

Gray also serves as the social justice general secretary for the Progressive National Baptist Convention. A few weeks ago, Gray baptized Johnson, which he said was one of the most impactful things he’s ever done in over 40 years as a pastor.

In his speech, Gray addressed Parson, who is also a Baptist: “The question of what the Lord requires of you is asked to all Christians.” He argued the answer requires embracing love and mercy. “I’m still hopeful that our governor who is a Baptist like me who reads the same word I do from our holy text, will take this opportunity to be humane.”

Before the crowd, Gray addressed a sense of hopelessness many felt, even before Johnson’s execution was upheld.

“It benefits no one to kill Kevin Johnson,” Gray said. “It’s hard to be hopeful when we understand that racism is real in Kevin’s case and so many other cases,” Gray said before the crowd. “It continues to be real in our justice system. But we continue to hold onto a hope that maybe one day, maybe in one case, somebody will get it right.”

Chapel with the NAACP said, “What we have here is an opportunity to correct Missouri’s long history of racial intolerance. As long as I have breath, the least I can do is lend it to Kevin Johnson.”

On July 5, 2005, the day of the crime, police sought to serve a warrant near Johnson’s house. While police were present, Johnson’s brother Joseph ‘Bam Bam’ Long suffered a seizure and collapsed. The police completed their search before giving medical attention to Long, who was later taken to a hospital where he died. Johnson shot an officer involved in the warrant hours later.

Johnson had no prior incidents of violence, MADP said at the time of the killing.

MADP said Johnson has continued to improve his life and take accountability while incarcerated.

During Johnson’s trial, his history of abuse and poverty were also part of extensive testimony. The MADP said Johnson’s upbringing was traumatic, losing his mother to drug use and living with his aunt who physically abused him. They said Johnson never received any intervention to help with his situation.

“Throughout Kevin Johnson’s trial and appeals, it has become increasingly apparent that this conviction and death sentence is the product of systematic racial discrimination,” Chapel said.

“The harm done by former prosecutor Bob McCulloch is still a matter of life and death for many living in St. Louis County.”

Max, the co-director of MADP, called Missouri a “high use state” with regard to active executions. She said there will likely be four separate dates set for executions in 2023. In previous years, there have been around one execution a year.

“The nation is watching us,” she said. “It’s pretty unprecedented.”