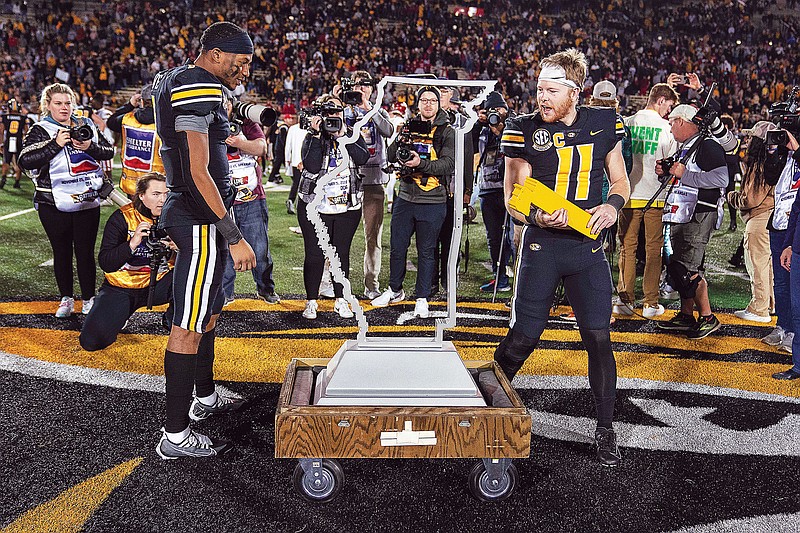 COLUMBIA -- The Missouri offense gave a glimpse of what the future can be.

The Tigers had their best performance against a Power Five opponent Friday, beating the Arkansas Razorbacks 29-27 to claim the Battle Line trophy at Faurot Field.

Sophomore quarterback Brady Cook continued his strong string of performances with a 16-for-26 day passing for 242 yards and a touchdown, giving him 714 yards and seven passing touchdowns in the past three games. But what separated the Tigers on Friday was Cook’s ability to run. He kept the ball 18 times for a career-high 138 yards and a touchdown, averaging 7.7 yards per carry.

“There were a couple of Arkansas players saying, ‘This boy running,’ and I’m just like, ‘Ya, about time.’ Cause he would sit back there some times,” sophomore receiver Dominic Lovett said. “But (quarterbacks) coach (Bush) Hamdan stressed to him that even when the wide receivers aren’t open, who’s open? You. So use your legs. He did that tremendously.”

Lovett was once again Cook’s main target, catching six passes for 130 yards to give him team highs of 56 catches and 846 yards on the season and place him fifth in the SEC in catches and second for receiving yards.

Sophomore Mookie Cooper had three catches for 45 yards, freshman Luther Burden had two catches for 30 yards and his eighth touchdown (five receiving, three rushing) and freshman Mekhi Miller had two catches for 28 yards, including a key third-down grab on the Tigers’ final drive to allow Missouri to continue running clock and force Arkansas to use its timeouts on defense.

The youthful showing led Missouri to a 468-yard performance overall.

Missouri’s offense started with a 46-yard drive to set up the first of three Harrison Mevis field goals to take a 3-0 lead. With his performance, Mevis ends the regular season 21-of-27 kicking with a perfect 7-for-7 from 40 to 50 yards and four makes of more than 50.

The Tigers used seven plays to drive 75 yards on their next drive, with Cook completing two passes to Lovett for a combined 39 yards and two more to Cooper for another 30. An open out route to Cooper got the ball down to the Arkansas 3, where Cody Schrader powered up the middle for his eighth touchdown of the season, putting Missouri up 10-7.

Missouri made sure to never get in a hole Saturday as it scored again on its next drive, which opened with a 55-yard pass from Cook to Lovett after Schrader ran up the middle for 5 yards on first down.

“I’d say (the Tiger offense) has been a little more aggressive, we don’t hit on all of them unfortunately, but we’re gonna hit on some of them and when we do, it’s gonna pay off,” Cook said of the deep shots Missouri took.

A Cook run set the ball at the Arkansas 9 as the game went to the break after the first quarter, then Cook ran up the middle again for a 9-yard touchdown, his sixth rushing touchdown of the season.

The Tigers added a field goal to end a nine-play 65-yard drive on their next series. Cook gained the majority of the yards on the drive, scrambling for 68 total yards with the team backed up five on an illegal shift. Mevis’ field goal put the Tigers up 20-14.

Arkansas responded with an 11-play 75-yard touchdown drive to go into halftime with a lead.

“In the first half, we were stuffing the run then they’d get a first down and tempo us,” Drinkwitz said. “We felt like if we could get them behind the sticks, our pass rush would be able to get to them.”

Missouri’s defense was getting to Arkansas quarterback KJ Jefferson all night, sacking him three times in the first half and another four times in the second, including two from senior Isaiah McGuire who played after separating his shoulder less than a week before.

The Tigers needed only one drive to regain the lead when Cook orchestrated a 10-play 75-yard drive. Cook took deep shots to Lovett and Burden to start the drive before completing his third try to Lovett for 22 yards. A 14-yard pass to Lovett and a 6-yard run from Schrader set the Tigers up at the Arkansas 25.

Cook connected with Burden on a screen for 7 yards, but a penalty moved the Tigers back before Cook found Burden on a hook route on the left side. The lone defender near Burden dove at the point of the catch and nearly tripped Burden turning away, but Burden stumbled to stay up for the 23-yard touchdown.

“The defense has kept us in games all year, they’ve done a hell of a job every single week,” Cook said. “After the bye week, I sat down and said, ‘I’m not gonna leave my defense hanging anymore. That’s not gonna happen.’ That’s been a big focus, we need to hold up our end of the bargain and if we do that, we have a heck of a team.”

The Tigers and Razorbacks traded field goals through the rest of the game.

Missouri extended to a 29-21 lead after starting on a short field because of a Daylan Carnell interception, his second in as many weeks.

Down 29-24 in the early fourth quarter, Arkansas got a pass interference penalty in the end zone to set up a first-and-goal from the Missouri 2, but the Tigers held for three consecutive plays to force an Arkansas field goal to cut the lead to 29-27.

Missouri’s defense forced consecutive three-and-outs, then the Tigers’ offense had a third-and-4 from its own 20. Arkansas used its first timeout, then Cook found Miller on a crossing route for a 22-yard gain to force Arkansas to use its remaining timeouts on defense.

Missouri eventually punted from midfield, but was able to hold Arkansas on the final three plays to end the season with a win and earn bowl eligibility for the third consecutive year. This is the first time Missouri (6-6, 3-5 SEC) has gone to three consecutive bowls since 2009-2011, which was the end of a seven-year bowl streak.

“Nobody wanted to say it, but … we just wanted it so bad,” Drinkwitz said. “We wanted it so bad. We tried not to make it bigger than it was, but at the end of the day, we knew we were playing for one more.”