Missouri holds off Arkansas for sixth win of the season 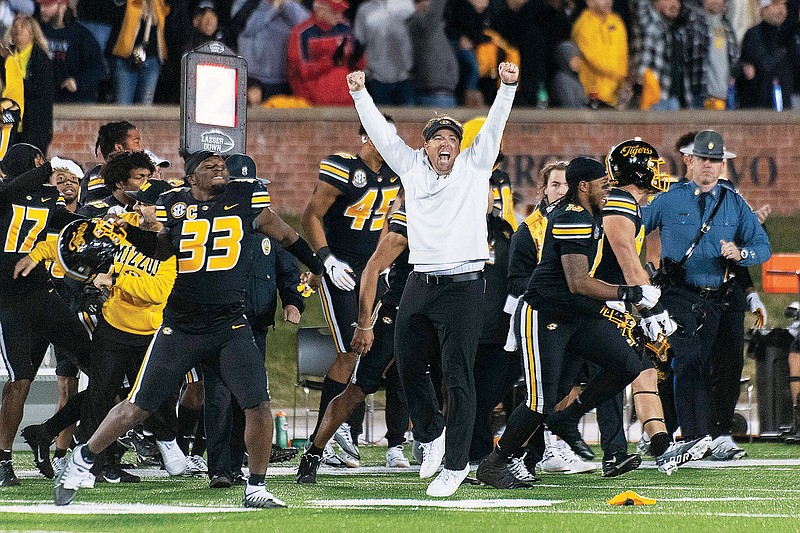 Missouri coach Eli Drinkwitz leaps as players run onto the field after the final play in Friday’s 29-27 win against Arkansas at Faurot Field in Columbia. (Associated Press)

COLUMBIA -- For the third consecutive year, the Missouri Tigers are going bowling.

The Tigers entered the Battle Line Rivalry game with Arkansas needing a win to get to 6-6 for the season and Missouri held on for a 29-27 victory Saturday at Faurot Field.

“Any time you’re playing for a trophy and you get it back and you didn’t have it before, is a big-time deal for us,” Missouri coach Eli Drinkwitz said.

Missouri’s offense continued the upward trend it’s been on the past few weeks, cruising through a struggling Arkansas defense in the first half to score on the Tigers’ first four drives. Most of that early success was led by Brady Cook who passed for 153 of his eventual 242 yards in the first half and cruised by his career-high rushing total with 125 yards before the break, ending with 138.

“He’s played really good football the past seven, eight, 10, 12 quarters,” Drinkwitz said. “He’s continuing to grow and develop, which is the name of the game. He didn’t flinch, his rushing ability is really what seperated us this game and gave us a chance to win.”

Cook’s rushing started on the opening drive when he kept a read option for a 27-yard carry, then he connected with Mookie Cooper on a wide-open out route for a first down, the first of Cooper’s three catches for 45 yards.

The drive stalled on the next set of downs, leaving Harrison Mevis to come on for a 40-yard field goal, the first and longest of his three made field goals.

Arkansas responded on its next drive with a strong showing from KJ Jefferson, who connected with Matt Landers on an open wheel route to lead to a 37-yard catch and run. Jefferson then gained 10 yards on a power quarterback run and finished the drive with a 3-yard touchdown. After the first of Cam Little’s three extra points, Arkansas led 7-3 with 5:26 left in the first quarter.

The Tigers needed less than three minutes to take the lead back.

Cook connected with Dominic Lovett for a first down, then found Lovett again in space for a 27-yard catch. They were two of Lovett’s six catches for 130 yards.

“The ball goes where the defense dictates for it to go,” Drinkwitz said. “We were aggressive in some of our RPO calls.”

Cook connected with Cooper again on an open out route, then Cody Schrader retook the team lead in total touchdowns when he finished the drive with a 3-yard run up the middle.

Missouri’s defense followed by forcing its second three-and-out to get the Tigers the ball back at their own 26.

On the second play of the drive, the Tigers’ offensive line gave Cook enough time to heave a deep ball down the right sideline to Lovett, who turned for a back-shoulder grab for 55 yards, setting up an eventual Cook keeper up the middle for a 5-yard touchdown with 14:56 left in the second quarter.

Arkansas responded with a 12-play, 75-yard drive, taking 5:30 off the clock and ending when Jefferson connected with Landers on a jump ball in the end zone. Jefferson heaved the throw to avoid an all-out Missouri blitz and Landers came down with the contested catch, wrestling with a Tiger defender for the ball through the whistle. Landers ended with four catches for 79 yards to lead the Razorbacks.

Cook rushed for nearly the Tigers’ entire next drive, keeping the ball four times for 68 yards and setting up a 27-yard Mevis kick to extend Missouri’s lead to 20-14.

Arkansas was able to end the half with an 11-play, 75-yard drive to score when Jefferson found Raheim Sanders open in the end zone for an 8-yard touchdown, taking a 21-20 lead into halftime.

It didn’t take long for Missouri to retake the lead in the second half.

The Tigers took three consecutive deep shots to open the series, missing on two but connecting on the third for a 22-yard pass to Lovett. Cook found Lovett again for another 14 yards to escape a fourth-and-2 at the Arkansas 45, then Luther Burden got the ball on three consecutive plays, including a 23-yard touchdown on a hook route. After the catch, Burden had only one man to beat down the sideline, stumbling to stay up past the lone defender as he turned out of the catch. The score tied Burden once again with Schrader for the team lead in total touchdowns with eight.

Missouri went for the 2-point conversion, but the pass was intercepted, leaving the Tiger lead at 26-21 with 10:09 left in the third quarter.

It was the final touchdown of the game, with the teams trading field goals back and forth as the defenses worked into their adjustments.

The Tigers used a Daylan Carnell interception, his second in two weeks, to set up a 29-yard Mevis kick, extending the lead to 29-21 with 5:32 in the third, then Arkansas drove to a 46-yard Little kick to get within 29-24 with 1:43 left before the final break.

Arkansas looked like it had the perfect situation after a pass interference was called on Ennis Rakestraw in the end zone, giving the Razorbacks first-and-goal from the 2, but the Tiger defense stopped them three consecutive plays with Rakestraw knocking down the third-down pass to set up Little for a 20-yard field goal and cut the Tiger lead to 29-27.

Missouri’s defense forced three three-and-outs on Arkansas’ final three possessions to hold the lead and send the Tigers and Drinkwitz to their third bowl in Drinkwitz’s third year.

“Heck of a way for us to win the game,” Drinkwitz said. “Down at halftime, get that big turnover in the third quarter and then defensively get those stops in the fourth quarter. … Really a complete team game, no turnovers. Had to have it and we got it done.”