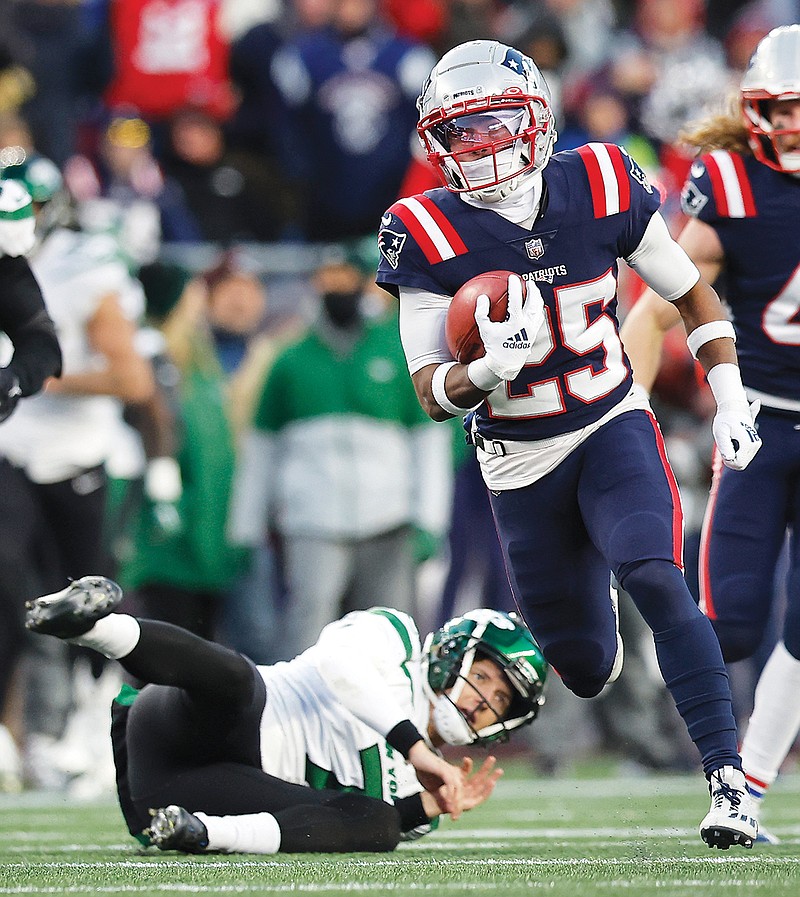 Marcus Jones of the Patriots runs past Jets punter Braden Mann on his punt return for a touchdown during the final minute of last Sunday's game in Foxborough, Mass. (Associated Press)

The Patriots had a bye the following week, and sure enough coach Bill Belichick had them ready for a bounce-back victory. Even after Tom Brady was lost for the year with a knee injury in the opener, the Patriots finished that 2008 season with an 11-5 record.

The response to the Week 3 blowout was methodical, not maniacal. The message was about controlling what was in their control and simply letting the rest of it go.

“That sticks with me to this very day, just as an example of what it’s like to coach in those moments where adversity hits and how you need to be at your best for your team,” O’Connell said.

The first-year Minnesota Vikings coach has found himself in that very situation this week, following a 40-3 loss to Dallas. The Vikings (8-2) host the Patriots (6-4), still coached by Belichick all these years later, on Thursday night with only four days to regroup. O’Connell, fittingly, will experience one of the biggest tests of his mettle as the boss against a coach who significantly influenced his know-how and perspective.

“I still have old notebooks with team meeting notes and things like that that are always great to go back and look through,” O’Connell said.

The first thing Belichick said this week when asked about his memory of O’Connell? That he was a “smart kid” who picked up the offense quickly.

“He’s done a heck of a job and climbed through the coaching ranks quickly,” Belichick said. “Based on the way the Vikings are playing this year, you could see why he’s done it.”

O’Connell made fast friends in 2008 with roommate Matthew Slater, a fellow member of that draft class who just so happens to still be playing for the Patriots as their long-time special teams ace. Slater was a groomsman in O’Connell’s wedding, and their wives are close with each other, too.

“I just can’t tell you how proud I am of him, to see him grow and to see him accomplish so much as a young coach in this league,” Slater said.

The two Southern California natives found plenty in common as 20-somethings living on the opposite coast in a vastly different climate.

During the 2011 lockout, when O’Connell was with the New York Jets, they got together for daily workouts at whatever school fields they could find to throw routes and stay in shape.

“A couple of kids trying to find our way. I guess we did all right for ourselves,” Slater said.

This is the first Thanksgiving Day home game in Vikings history. They’re 6-2 on the football-fueled holiday, last playing at Detroit in 2017. The Patriots are 3-2, all on the road. Their previous appearance was a win against the Jets in 2012.

Washington played at Dallas three times on Thanksgiving when quarterback Kirk Cousins was there, twice as the starter.

“A lot of kids grow up playing in the backyard, playing football on Thanksgiving, but not a lot get to continue like we’ve been able to do,” Cousins said. “It’s a real privilege, and you want to play in such a way that reflects that. Hopefully we can get it done.”

The Patriots tried a new look on the offensive line last week in a 10-3 win against the Jets, seeking improvement for a group that has given up 12 sacks in the past two games. They benched Trent Brown, who started the previous nine games at left tackle. Then they shifted Isaiah Wynn from right tackle back to the left side he played on most of last season. Yodny Cajuste started on the right side.

But that alignment was altered after Wynn injured his foot. Brown replaced him. Center David Andrews also left the game with a thigh injury, cutting short his return from back-to-back absences recovering from a concussion. Wynn didn’t practice Tuesday, putting his availability in question. Andrews was listed as a limited participant.

The Vikings had several flaws exposed by the Cowboys in the blowout loss, but the Patriots have been treating that more like an anomaly than a tip sheet. Safety Kyle Dugger said he has spent more time watching prior performances to get a true picture, considering the Vikings won seven straight games all by eight points or fewer.