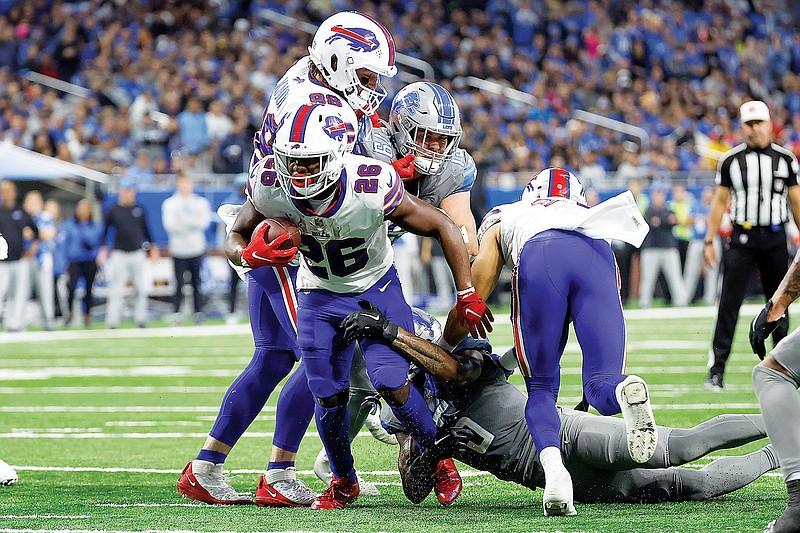 Bills linebacker Von Miller gets set on defense during last Sunday's game against the Browns in Detroit. (Associated Press)

DETROIT -- The Buffalo Bills are back in Detroit and this time, they’re facing the suddenly surging Lions on Thanksgiving.

The NFL shifted Buffalo’s previous home game against Cleveland to Ford Field after a winter storm dumped several feet of snow across the Buffalo area.

The Bills dug out of their snow-packed home and some needed help from team employees, neighbors and strangers to get out of town before beating the Browns to end a two-game losing streak.

Buffalo (7-3) is tied with Miami atop the AFC East and needs another win to keep pace with the Dolphins while holding off New England and the New York Jets, teams in the division that are only one game back.

“These short weeks are pretty tough in terms of scheduling and guys trying to get their bodies right to play, but it’s tough for them as well,” quarterback Josh Allen said.

Detroit (4-6) has won three games in a row for the first time in five years and the last such stretch of success was snapped on Thanksgiving, starting a five-game losing streak on the holiday.

“It’s been a while since there has been this much positivity around the building,” said offensive tackle Taylor Decker, who is in his seventh season with the franchise. “Three wins may not seem like a big deal, but it is.”

The Lions certainly are not used to it because they haven’t won more than three straight games since a five-game winning streak when Decker was a rookie in 2016.

Both teams will be missing key players.

Bills offensive coordinator Ken Dorsey credited the COVID-19 pandemic for helping assist him and his staff to develop a game plan on a short week and with little or no time to practice.

“Bringing that stuff home and creating cut-ups at home so a lot of guys were able to take their work home … and really not miss too much,” Dorsey said.

Decker said playing the Bills, a popular pick before the season to contend for the Super Bowl, gives Detroit a chance to validate its resurgence.

“It will be a really good barometer to see if we can replicate what we’re doing, especially on a short week,” Decker said. “It’s a huge opportunity on the national stage.”

“When Von showed me that shirt the night before the game, I was like, ‘Wow.′ You talk about humbling,” said Frazier, who is in his sixth season with the Bills and 24th in the NFL.

The 33-year-old Miller is tied for 10th in the NFL with eight sacks, six of which have come in five road games.

Decker said the line will use “The Von Miller Rule,” against him. While Decker said it’s too complicated to explain, he was quick to say it wasn’t like the “Jordan Rules,” applied by the Pistons to rough up Michael Jordan.

If the Lions’ depleted offensive line can give Jared Goff time to throw, standout receiver Amon-Ra St. Brown may be a pivotal player.

Buffalo’s young and short-handed secondary struggled the past two games against top receivers. Cleveland’s Amari Cooper had eight catches for 113 yards and two touchdowns last week after Minnesota’s Justin Jefferson had 10 catches for 193 yards and a score.

St. Brown had a total of 17 receptions for 195 yards in road wins over the New York Giants and Chicago Bears, but he has gone seven straight games without scoring after he had a six-game scoring streak going back to last season.