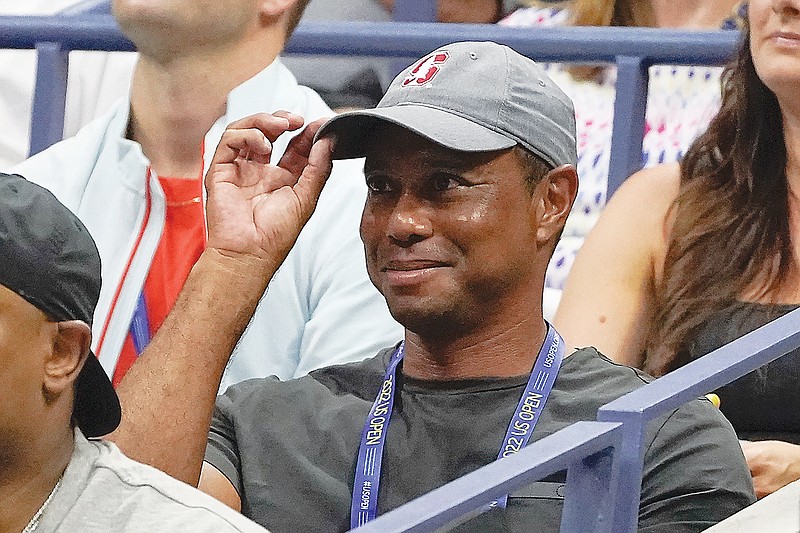 In this Aug. 31 file photo, Tiger Woods tips his hat to the crowd during a match between Serena Williams and Anett Kontaveit in the second round of the U.S. Open in New York. (Associated Press)

Tiger Woods is making a bigger impact off the course than inside the ropes, and he was rewarded with a $15 million bonus from the PGA Tour’s Player Impact Program.

He was recovering from a car crash in 2021 and played only two rounds of the PNC Championship with his son, Charlie. This year, he played in three majors, making it to the weekend in two of them, finishing 72 holes only in the Masters.

Woods still ranked No. 1 in four of the five PIP categories. The exception was “TV Sponsor Exposure,” which is the length of time a player’s sponsor logos appear on the screen during weekend rounds. He played only three of those.

Collin Morikawa won the British Open and a World Golf Championship last year and finished out of the money at No. 11 when the program rewarded only 10 players. Now the bonus pool has doubled to $100 million and expanded to 20 players.

He didn’t win this year and still finished 11th.

The pool was $106 million this year because the PGA Tour used two sets of criteria -- the one used last year, and the new one going forward that uses “general population awareness” and “golf fan awareness” to replace Q-rating and social media.

Hideki Matsuyama, Cameron Young and Sam Burns would have been in the top 20 using the new model and were awarded $2 million. In all, 23 players received bonuses.

According to a tour memo to players obtained by the AP, those who won PIP money must play in a designated tournament agreed upon by the tour, take part in a PIP service event and play 15 times, 12 of them in elevated events.

Woods is an exception as he plays a limited schedule because of his bad legs. The commissioner has discretion to waive playing requirements for anyone dealing with a serious injury or family emergency.

The 2023 PIP program began in October and will run through August when the season ends. Woods is playing next week in his Hero World Challenge in the Bahamas.

Players who signed with Saudi-funded LIV Golf were not eligible for the award because they were suspended by the PGA Tour if they didn’t resign their membership. That includes Phil Mickelson, who finished second to Woods last year after sending out a tweet that he had won.

After Morikawa at No. 11, the next four players who also receive $3 million are Shane Lowry, Kevin Kisner, Max Homa and Billy Horschel. Rounding out the top 20, worth $2 million, are Rickie Fowler, Adam Scott, Jason Day, Patrick Cantlay and Viktor Hovland.