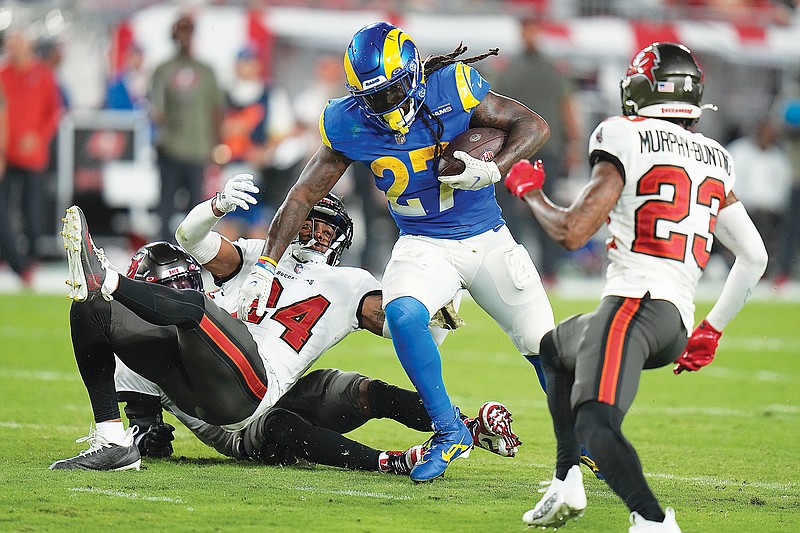 Rams running back Darrell Henderson Jr. runs during a game against the Buccaneers earlier this month in Tampa, Fla. (Associated Press)

Los Angeles (3-7) has lost four straight games for the first time in coach Sean McVay’s tenure, and the moves indicate younger players will get a chance to play more down the stretch for the defending Super Bowl champions.

Henderson has rushed for 1,742 yards and 13 touchdowns over four seasons with the Rams, who chose him in the third round in 2019. Henderson started 28 games, including seven this season, and played extensively in the Los Angeles backfield whenever he was injury-free during his career.

But the Rams have the NFL’s 31st-ranked rushing offense this season, moving out of last place after producing a season-high 148 yards on the ground last weekend while losing at New Orleans. Henderson got only two carries against the Saints while the Rams relied on Cam Akers and rookie Kyren Williams behind an offensive line that has had 10 different starting combinations in 10 games.

McVay claimed Henderson had a minor knee injury, citing it as the reason he barely played. But Henderson is in the final year of his rookie contract before free agency, and the Rams are moving on before the final seven games of what’s looking like a lost season for Los Angeles.

Henderson has 283 yards rushing and three touchdowns this season. He is averaging 4.0 yards per carry, significantly more than Akers -- who was sent home for three weeks and nearly traded at the deadline after a dispute with the coaching staff. Williams only returned to the Rams’ lineup Nov. 13 after missing eight weeks with an ankle injury.

The Rams claimed Hollins off waivers in September 2020, and he became a regular member of their rotation as an edge rusher. Hollins had six sacks in 34 games with the Rams, including five starts this season while playing in all 10 games.

But Hollins has only one sack this season, and the Rams’ ineffectiveness in the pass rush has been one of the weakest points for their solid defense.