More than just a rivalry game Friday for Missouri 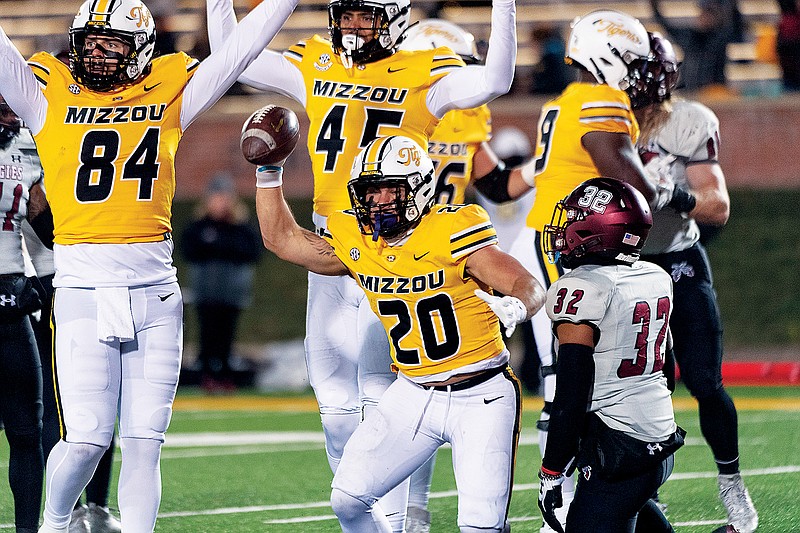 KANSAS CITY -- The situation could not seem simpler for Missouri heading into Friday’s rivalry game with Arkansas: Win and the Tigers qualify for a bowl game, lose and they’re sitting home for the holidays.

Yet there is more riding on the outcome than the chance to play one more game in December in balmy weather.

The Tigers, who have qualified for bowl games in each of coach Eli Drinkwitz’s first two seasons, are still trying to return their program to SEC prominence. And finishing .500 against a rugged schedule could be considered a sign of progress, while a second straight loss to the Razorbacks would give Missouri its first losing season since 2016.

This season has certainly been a bear.

After an opening win against Louisiana Tech, the Tigers were blasted on the road by former Big 12 rival Kansas State, which could be playing for the Big 12 title by the end of the week. After returning home to face Abilene Christian, the Tigers began SEC play with road trips to Auburn and Florida sandwiched around a home game against No. 1 Georgia.

The Tigers actually acquitted themselves quite well during that stretch.

At least everywhere but the win-loss column.

The Tigers had Auburn beat in regulation when normally sure-thing kicker Harrison Mevis missed a chip-shot, then had the game won in overtime before Nathaniel Peat fumbled the ball away stretching for the end zone. The result: a 17-14 loss.

The following week, the Tigers gave the Bulldogs their toughest game to date, taking a 16-6 lead into halftime and holding onto the advantage until the the fourth quarter. That’s when the Bulldogs scored back-to-back touchdowns to wipe out the 10-point deficit, and the go-ahead score with 4:03 left propelled Georgia to a 26-22 victory.

Down in the Swamp, the Tigers rallied from an early pick-six to forge a tie at 10 with Florida at halftime. And they were still within a touchdown when Brady Cook’s fourth-down pass near midfield fell incomplete with about a minute to go, allowing the Gators to escape with a 24-17 victory.

The Tigers lost another nail-biter to Kentucky, making it four conference losses to four potentially bowl-bound teams by a combined 18 points, when a positive outcome in any of them would have Missouri headed to a bowl game already.

“We all want it to be straight up -- linear -- but rarely in my life has success looked like that,” said Drinkwitz, who signed a contract extension earlier this season. “It’s always been a process in building, and there are days you stub your toe. It doesn’t mean you cut your toe off. You keep going and go to work, and that’s frustrating for fans and frustrating for people, but it’s not frustrating for me when I see the vision for what we can accomplish.”

It would send Missouri to a bowl game -- probably the Liberty Bowl, Las Vegas Bowl or Music City Bowl. It would give the Tigers about three more weeks of practice, which is invaluable for a young team. And it would confirm what Drinkwitz has been preaching, namely his program is on the right track heading into next season.

“I haven’t put any thought process into the season overview and all that. All I’m focused on is this game, this week, being 1-0, stacking that up,” Drinkwitz said, “and after the game Friday, I’ll take 48 hours and reflect on where everything is. But right now my mindset is on rallying this team to prepare to play our best game.”