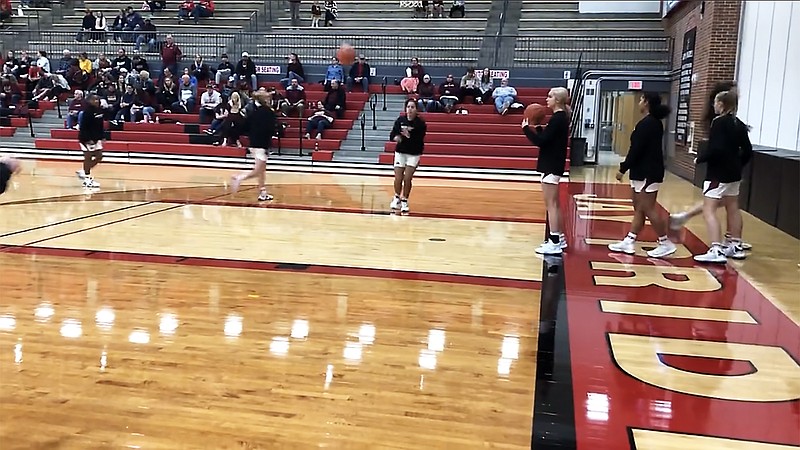 The Jefferson City Lady Jays warm up on the court prior to the start of Tuesday night's season opener against the Eldon Lady Mustangs at Fleming Fieldhouse. (Trevor Hahn/News Tribune)

It took until Dec. 28 last year for the Jefferson City Lady Jays to get their first win.

It took just one game this season, as Jefferson City used a huge second quarter Tuesday night to run away with a 65-45 victory against the Eldon Lady Mustangs at Fleming Fieldhouse.

The Lady Mustangs led 17-14 with 6:43 left in the first half, but the Lady Jays went on a 25-4 run to close out the second to grab momentum that they would never give back.

“I’m beyond excited,” Jefferson City coach Kay Foster said. “It just takes a lot of pressure off to get that first win of the season.”

It was Eldon that controlled the momentum in the first quarter, though.

The Lady Mustangs were taking advantage of Jefferson City’s man-to-man defense and jumped out to a 13-12 lead after eight minutes.

Senior forward Hannah Linthacum carried the load offensively for the Lady Jays in the first quarter, collecting 10 of her game-high 27 points in the opening frame.

“We were going a little faster than we should’ve been, not getting to our spots, not being patient for the next pass,” Foster said. “We had great looks, we just couldn’t knock shots down from the outside.”

Shooting was not a problem in the second quarter for Jefferson City.

Junior Reagan Nilges was 0-for-5 from the 3-point line in the first quarter, but exploded for 12 points in the second after shooting 4-for-4 from behind the arc to spark the scoring run.

“We know that about Reagan that once she gets one down, she’s probably going to hit the next four or five,” Foster said. “That’s pretty much what played out with her tonight.”

But the biggest key to the game-changing run for the Lady Jays was their switch to the 2-3 zone, which gave Eldon all sorts of problems on the offensive end and held the Lady Mustangs to just 3-for-8 shooting from the field while forcing five turnovers -- including four straight possessions ending with a turnover at the start of the run.

“Their team creates some matchup problems for us with our particular personnel,” Foster said. “We started in man, but it was really no surprise to me that we got into our next defense. That defense helped plug up some holes and match up some shooters.”

Jefferson City held Eldon scoreless for the final three minutes of the first half and closed out the big run with Nigles’ fourth 3 with eight seconds left to take the 39-21 lead into the break.

The Lady Mustangs the third quarter with a 3 from Sydney Halderman -- three of her 15 points on the night -- and cut their deficit to 14 points after a 3 by Jaci Mueller after Lyric Hearn responded to Halderman’s 3 with a layup.

14 points would end up being the closest Eldon would get in the second half, as Jefferson City went on a 9-2 run to follow coming on a layup and another 3 from Nigles and a pair of a layups by Linthacum.

Jefferson City kept the pedal down on both sides of the court and carried an 18-point lead into the fourth quarter.

The Lady Jays led by as many as 25 points with 2:22 left in the fourth quarter at 65-40 after a layup by Bri Avey and the game was on cruise control from there.

Jefferson City (1-0) saw Linthacum get her 11th-straight double-double dating back to the end of last season after her 27 points and 12 rebounds Tuesday night. Nilges ended the night 5-for-12 from the 3-point line and finished with 17 points.

Eldon (1-1) was led by Mueller’s 18 points on 7-of-14 shooting. The Lady Mustangs will look to rebound next Tuesday when they start the Tipton Tournament with a 7 p.m. game against New Bloomfield.

The Lady Jays will be back in action Dec. 3 for a 4 p.m. game against Blue Valley North (Kan.) in the Sophie Cunningham Classic at Columbia College.

The Lady Jays were led by Aaleah Woodard’s nine points, with Mia McGraw and Deyja Mayes right behind with eight points each.