How cooking food and gathering for feasts made us human 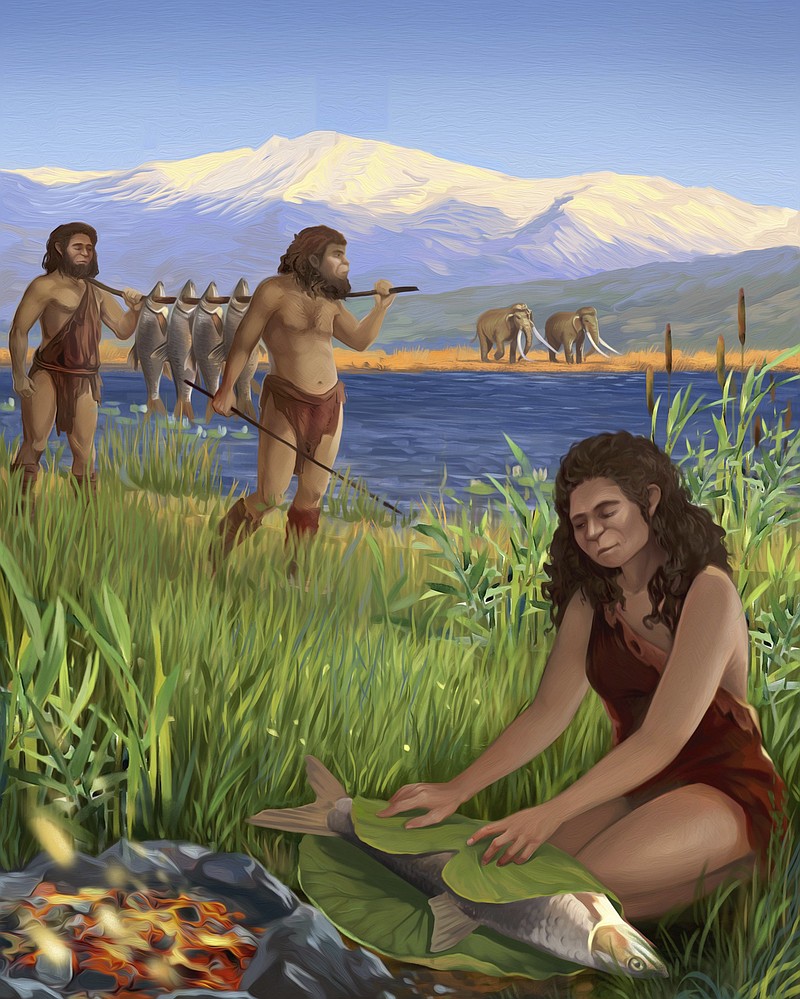 This illustration provided by Tel Aviv University depicts hominins preparing Luciobarbus longiceps fish on the shores of the ancient lake Lake Hula. A recent study found the oldest evidence of using fire to cook, dating back to 780,000 years ago. (Ella Maru/Tel Aviv University via AP)

If you're cooking a meal for Thanksgiving or just showing up to feast, you're part of a long human history -- one that's older than our own species.

Some scientists estimate our early human cousins may have been using fire to cook their food almost 2 million years ago, long before Homo sapiens showed up.

And a recent study found what could be the earliest known evidence of this rudimentary cooking: the leftovers of a roasted carp dinner from 780,000 years ago.

Cooking food marked more than just a lifestyle change for our ancestors. It helped fuel our evolution, give us bigger brains -- and later down the line, would become the centerpiece of the feasting rituals that brought communities together.

"The story of human evolution has appeared to be the story of what we eat," said Matt Sponheimer, an anthropologist at the University of Colorado at Boulder who has studied the diets of early human ancestors.

The new study, published in the journal Nature Ecology and Evolution, is based on material from Gesher Benot Ya'aqov in Israel -- a watery site on the shores of an ancient lake.

Artifacts from the area suggest it was home to a community of Homo erectus, an extinct species of early humans that walked upright, explained lead author Irit Zohar of Tel Aviv University.

Over years of "digging in mud" at the site, researchers examined a curious catch of fish remains, especially teeth, said Naama Goren-Inbar, an archaeologist at the Hebrew University of Jerusalem who led the excavations.

Many were from a couple of species of big carp, and they were clustered around certain spots at the site -- places where researchers also found signs of fire. Testing revealed the teeth had been exposed to temperatures that were hot, but not super-hot. This suggests the fish were cooked low and slow, rather than tossed right onto a fire, Zohar explained.

With all of this evidence together, the authors concluded that these human cousins had harnessed fire for cooking more than three quarters of a million years ago. That's much earlier than the next oldest evidence for cooking, which showed Stone Age humans ate charred roots in South Africa.

The researchers -- like many of their colleagues -- believe cooking started long before this, though physical evidence has been hard to come by.

"I am sure that in the near future an earlier case will be reported," study author Israel Hershkovitz of Tel Aviv University said in an email.

That's in part because harnessing fire for food was a key step for human evolution.

Cooking food makes it easier for the body to digest and get nutrients, explained David Braun, an archaeologist at George Washington University who was not involved with the study. So, when early humans figured out how to cook, they got access to more energy, which they could use to fuel bigger brains.

Based on how human ancestors' brains and bodies developed, scientists estimate that cooking skills would have had to emerge nearly 2 million years ago.

"If we're out there eating raw items, it is very difficult to make it as a large-bodied primate," Braun said.

Those first cooked meals were a far cry from today's turkey dinners. And in the many, many years in between, humans started not just eating for fuel, but for community.

In a 2010 study, researchers described the earliest evidence of a feast -- a specially prepared meal that brought people together for an occasion 12,000 years ago in a cave in Israel.

The cave, which served as a burial site, included the remains of one special woman who seemed to be a shaman for her community, said Natalie Munro, a University of Connecticut anthropologist.

It seems her people held a feast to honor her death. Munro and her team found large numbers of animal remains at the site -- including enough tortoises and wild cattle to create a hearty spread.

This "first feast" came from another important transition point in human history, right as hunter-gatherers were starting to settle into more permanent living situations, Munro said. Gathering for special meals may have been a way to build community and smooth tensions now that people were more or less stuck with each other, she said.

And while the typical feast may no longer involve munching on tortoise meat in burial caves, Munro said she still sees a lot of the same roles -- exchanging information, making connections, vying for status -- happening at our modern gatherings.

"This is something that's just quintessentially human."

Print Headline: How cooking food and gathering for feasts made us human