Helias girls get past Blair Oaks in season opener 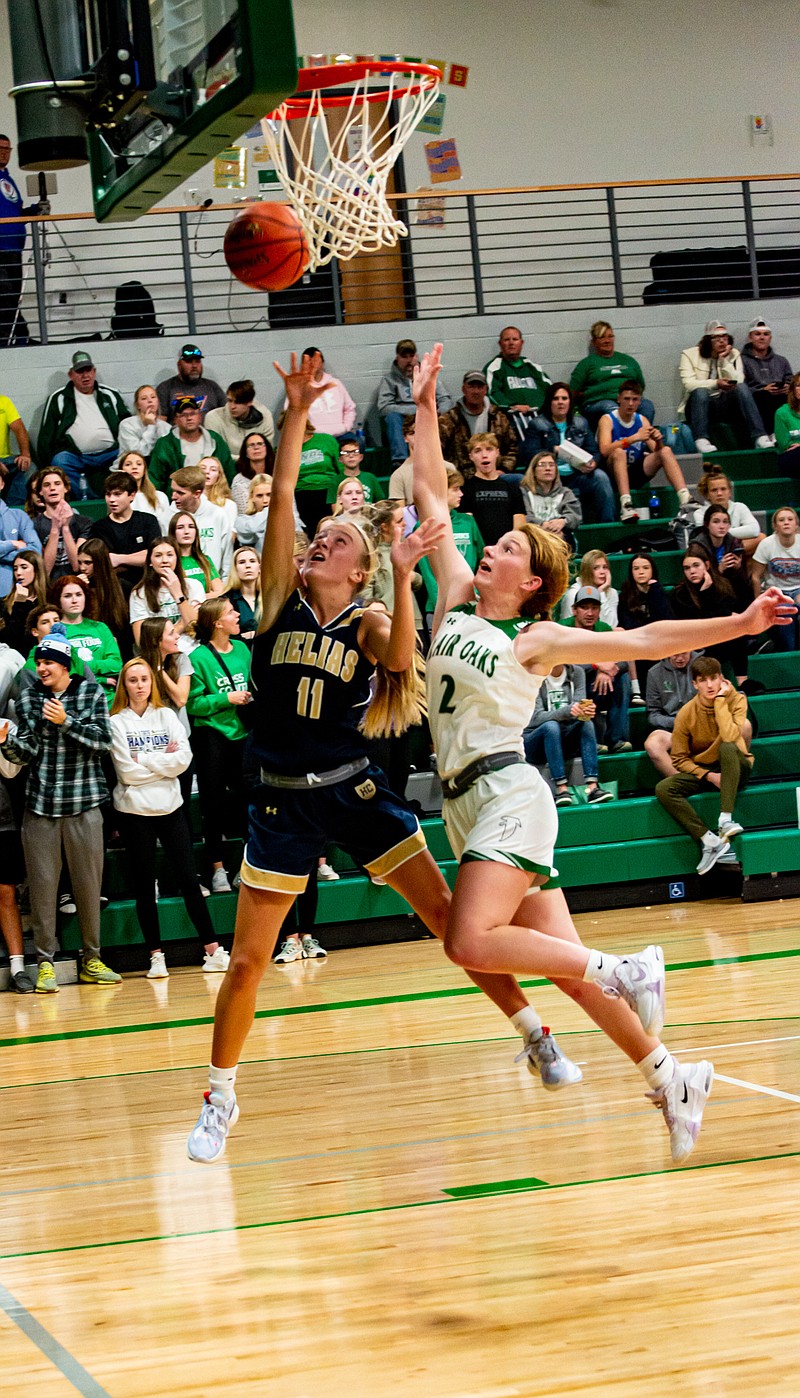 WARDSVILLE -- The Helias Lady Crusaders and the Blair Oaks Lady Falcons both take pride in their defense on the basketball court.

On Tuesday night, Helias forced a handful more turnovers and committed fewer fouls, which added up to a victory in its season opener.

“The energy was there,” Helias coach Garrett Wiggans said following a 62-43 win against Blair Oaks. “We caused several turnovers that led to points, which is what we want to do.”

Helias held Blair Oaks to 2-of-10 shooting in the first quarter, building a 15-4 advantage after the opening eight minutes.

“That’s how you want to start a game,” Wiggans said.

The game began with a post matchup battle between Koelling and Blair Oaks’ Autumn Bax. However, the Lady Falcons switched to a 3-2 zone in the early going, which allowed Koelling to move around the court to get her touches.

“They changed it up to where she was a high post flashing, looking over the top, and that was very effective for them,” Blair Oaks coach Brandon Moore said.

Koelling scored five points in the first quarter and finished with a game-high 24 points, shooting 10-of-17 from the floor.

“She’s always in the gym working, even on days when she probably doesn’t want to be in the gym,” Wiggans said.

The Lady Crusaders used an 11-2 run early in the second quarter to stretch their lead to 26-9, getting a pair of 3s from Claire Galbraith.

Blair Oaks was plagued by 13 turnovers and 10 fouls in the first half.

“They put a lot of pressure on us,” Moore said.

The Lady Falcons shot 48 percent from the floor in the second half after making just 29 percent of their shot in the first half.

Bax scored the Lady Falcons’ final seven points of the first half as Blair Oaks trailed 35-17 at intermission. In two games, Bax has already expanded her role from being a post player to being a point forward, bringing the ball up the court when needed against Helias’ full-court press.

“She’s one of our best ball-handlers, so we put her in that spot,” Moore said of Bax, who had a double-double of 15 points and 11 rebounds to lead the Lady Falcons. “She typically makes good decisions, she’s good at reacting and making the right play.”

Blair Oaks made three of its first four shots in the second half, but Helias never allowed the Lady Falcons to go on a run to cut the deficit to single digits.

Morris had a big second half for the Lady Crusaders, making all five shots from the floor. Koelling assisted Morris on four of those baskets.

“We maybe set a record on assists tonight,” Wiggans said. “Ball movement was great and we were finding the girl that was open when we needed to.”

Helias led 45-30 through three quarters and Morris stretched the lead to 19 with back-to-back baskets to start the fourth. Koelling made 1-of-2 free throws and added a basket over Bax in the lane, then Harrison scored in transition to give the Lady Crusaders their largest lead of the game at 54-32 with 3:58 to play.

Wolken also reached double figures for Blair Oaks with 10 points, shooting 3-of-10 from 3-point range. Blair Oaks shot 4-of-19 from beyond the arc.

“We were getting the looks, they just weren’t falling,” Moore said. “As a coach, you have to say, ‘You’ve got to just keep shooting.’ The law of averages will eventually pay off.”

Helias returns four starters from last year’s Final Four team. The Lady Crusaders used a six-player rotation for almost the entirety of the game and was able to avoid foul trouble while forcing 23 turnovers.

“We condition our girls, especially if they’re going to be playing a lot of minutes,” Wiggans said.

Both teams will play next week in the Fatima Comet Classic.

Helias (1-0), the No. 1 seed in the tournament, begins pool play against fourth-seeded Moberly at 5 p.m. Monday.

“Once that tournament gets here, it seems like our schedule is not going to slow down,” Wiggans said.

“We have to continue working on getting a good shot and a good possession every trip down on the offensive floor,” Moore said. “We have to be able to handle the pressure in the open court.”

Lauren Verslues, Savanah Pemberton and Iris Morrisey each scored six points to lead Helias, which was ahead 17-2 after one quarter.

Karen McCauley had six points to lead Blair Oaks, which made four 3s in the second quarter.