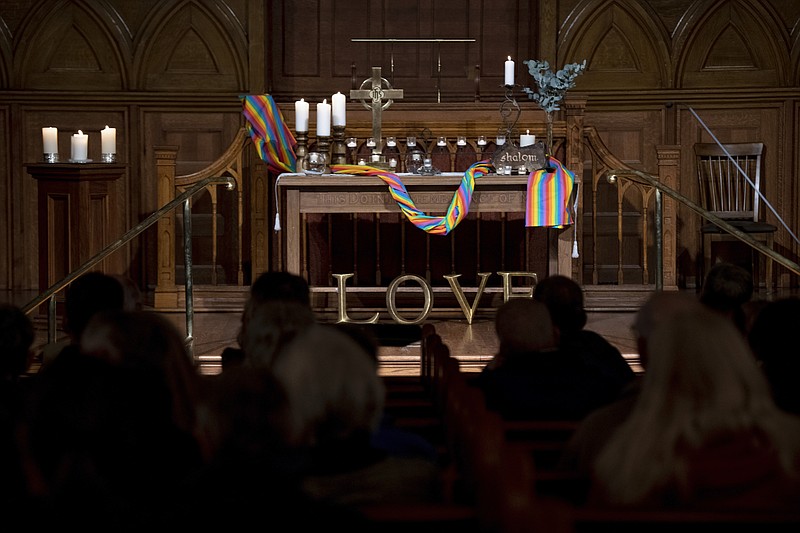 A pride flag wraps around the altar at First Congregational Church during a vigil for the victim's of Saturday's fatal shooting at Club Q on Monday, Nov. 21, 2022, in Colorado Springs, Colo. (AP Photo/ Parker Seibold)

COLORADO SPRINGS, Colo. (AP) -- The suspect in the mass shooting of 22 people at a Colorado gay nightclub sought to change his name more than six years ago, according to public records. The request came months after he was apparently targeted by online bullying.

Anderson Lee Aldrich, 22, who faces murder and hate crime charges, was known as Nicholas Brink until 2016. Just before his 16th birthday, he petitioned a Texas court to change his name, records show.

Online court documents offered no official reason for the name change, which was first reported by the Washington Post. The paperwork was signed by his grandparents, the Post said.

Months earlier, when he was 15, a website with photos of Brink targeted him with ridicule, the Post reported. Additionally, a YouTube account was opened in his name that included an animation titled "Asian homosexual gets molested."

The petition for the name change was filed later in Bexar County, Texas, records show.

The motive in Saturday's shooting that left five dead at Club Q in Colorado Springs was still under investigation.

The suspect, who remained hospitalized Tuesday, was tackled and beaten by bar patrons during the attack that left 17 other people with gunshot wounds. Aldrich faces five murder charges and five charges of committing a bias-motivated crime causing bodily injury, online court records showed.

Hundreds of people, many holding candles and wiping away tears, gathered Monday evening in a Colorado Springs park to honor victims of the assault on a nightlife venue that for decades was a sanctuary for the LGBTQ community in this mostly conservative city of about 480,000 about 70 miles south of Denver.

Jeremiah Harris, who is 24 and gay, said he went to the club a couple times a month and recognized one of the victims as the bartender who always served him.

Hate crime charges would require proving that the gunman was motivated by bias, such as against the victims' actual or perceived sexual orientation or gender identity. The charges against Aldrich are preliminary, and prosecutors have not yet filed formal charges in court.

Court documents laying out Aldrich's arrest have been sealed at the request of prosecutors. Information on whether Aldrich had a lawyer was not immediately available.

Local and federal authorities declined to answer questions Monday about why hate crime charges are being considered, citing the ongoing investigation. District Attorney Michael Allen noted the murder charges would carry the harshest penalty -- life in prison -- whereas bias crimes are eligible for probation.

"But it is important to let the community know that we do not tolerate bias motivated crimes in this community, that we support communities that have been maligned, harassed and intimidated and abused," Allen said, adding that additional charges are possible.

More details emerged Monday about those killed and those credited with stopping the shooting.

Authorities said the attack was halted by two club patrons including Richard Fierro, who told reporters that he took a handgun from Aldrich, hit him with it and pinned him down with help from another person.

Fierro, a former Army major who now owns a local brewery, said he was celebrating a birthday with family members when the suspect "came in shooting." Fierro said he ran at the suspect, who was wearing some type of body armor, and pulled him down before severely beating him until police arrived.

Though his actions saved lives, Fierro said the deaths -- including his daughter's boyfriend, 22-year-old Raymond Green Vance -- were a tragedy for him personally and for the broader community.

"There are five people that I could not help, and one of which was family to me," he said.

Vance's family said in a statement that the Colorado Springs native was adored by his family and had recently gotten a job at FedEx, where he hoped to save enough money to get his own apartment.

The other victims were identified by authorities and family members as Ashley Paugh, 35, a mother who helped find homes for foster children; Daniel Aston, 28, who had worked at the club as a bartender and entertainer; Kelly Loving, 40, whose sister described her as "caring and sweet;" and Derrick Rump, 38, another club bartender who was known for his quick wit and adopting his friends as his family.

Thomas James was identified by authorities as the other patron who intervened to stop the shooter. Fierro said a third person also helped -- a performer at the club who Fierro said kicked the suspect in the head.

A law enforcement official said the suspect used an AR-15-style semi-automatic weapon. A handgun and additional ammunition magazines also were recovered. The official could not discuss details of the investigation publicly and spoke to the AP on condition of anonymity.

The assault raised questions about why authorities did not seek to take Aldrich's guns away from him in 2021, when he was arrested after his mother reported he threatened her with a homemade bomb and other weapons.

Though authorities at the time said no explosives were found, gun-control advocates have asked why police didn't use Colorado's "red flag" laws to seize the weapons his mother says he had. There's no public record prosecutors ever moved forward with felony kidnapping and menacing charges against Aldrich.

The nightclub attack was the sixth mass killing this month, and it came in a year when the nation was shaken by the deaths of 21 in a school shooting in Uvalde, Texas. It also rekindled memories of the 2016 massacre at the Pulse gay nightclub in Orlando, Florida, that killed 49 people. 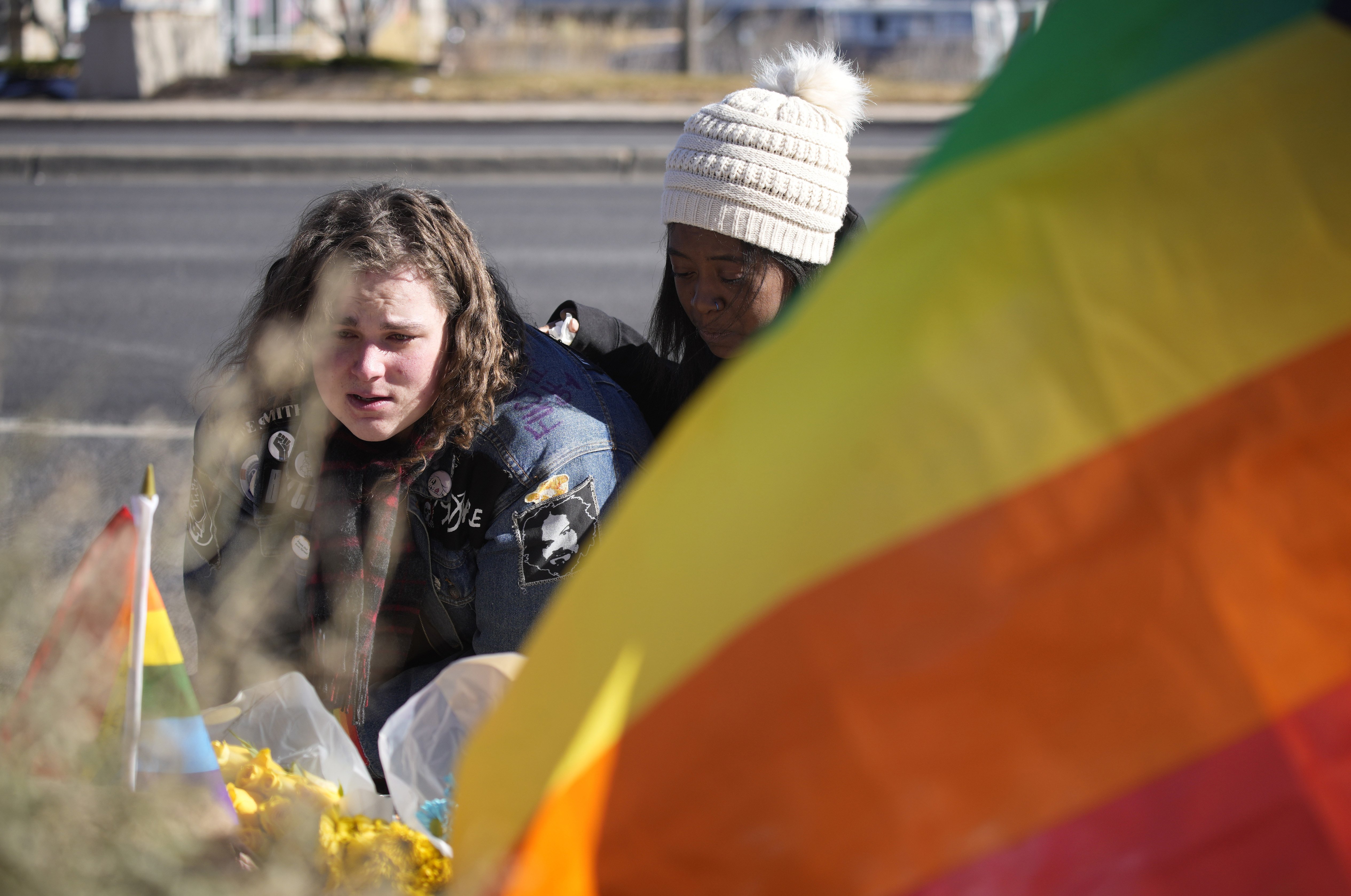 EDS NOTE: OBSCENITY - Zeth Gross, left, is consoled by Keairra Barron at a makeshift tribute with a display of flowers on a corner near the site of a mass shooting at a gay bar Monday, Nov. 21, 2022, in Colorado Springs, Colo. (AP Photo/David Zalubowski) 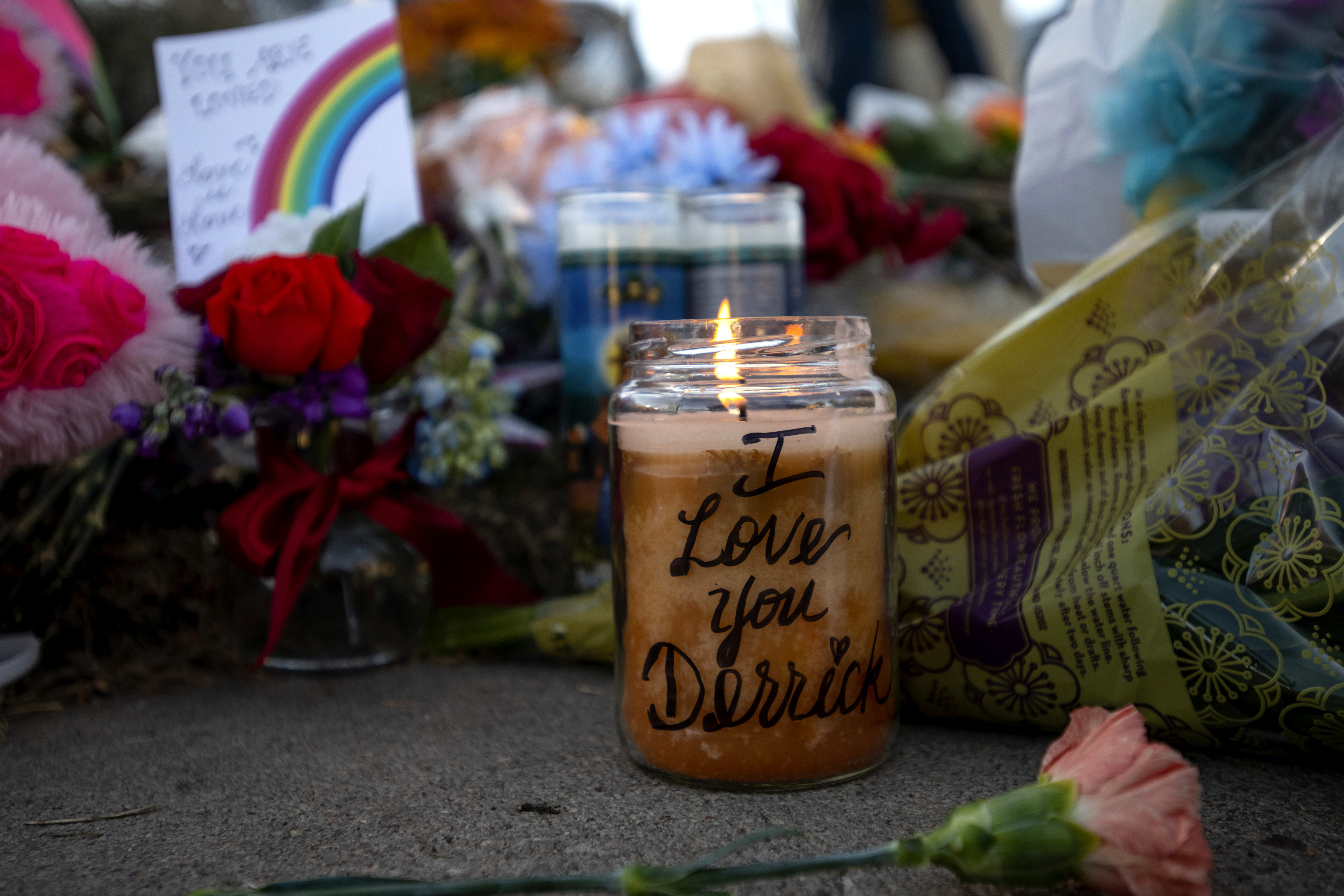 A candle with a note to Derrick Rump, one of the five victims of Saturday's fatal shooting at Club Q, burns at a memorial Monday, Nov. 21, 2022, in Colorado Spring, Colo. (AP Photo/Parker Seibold) 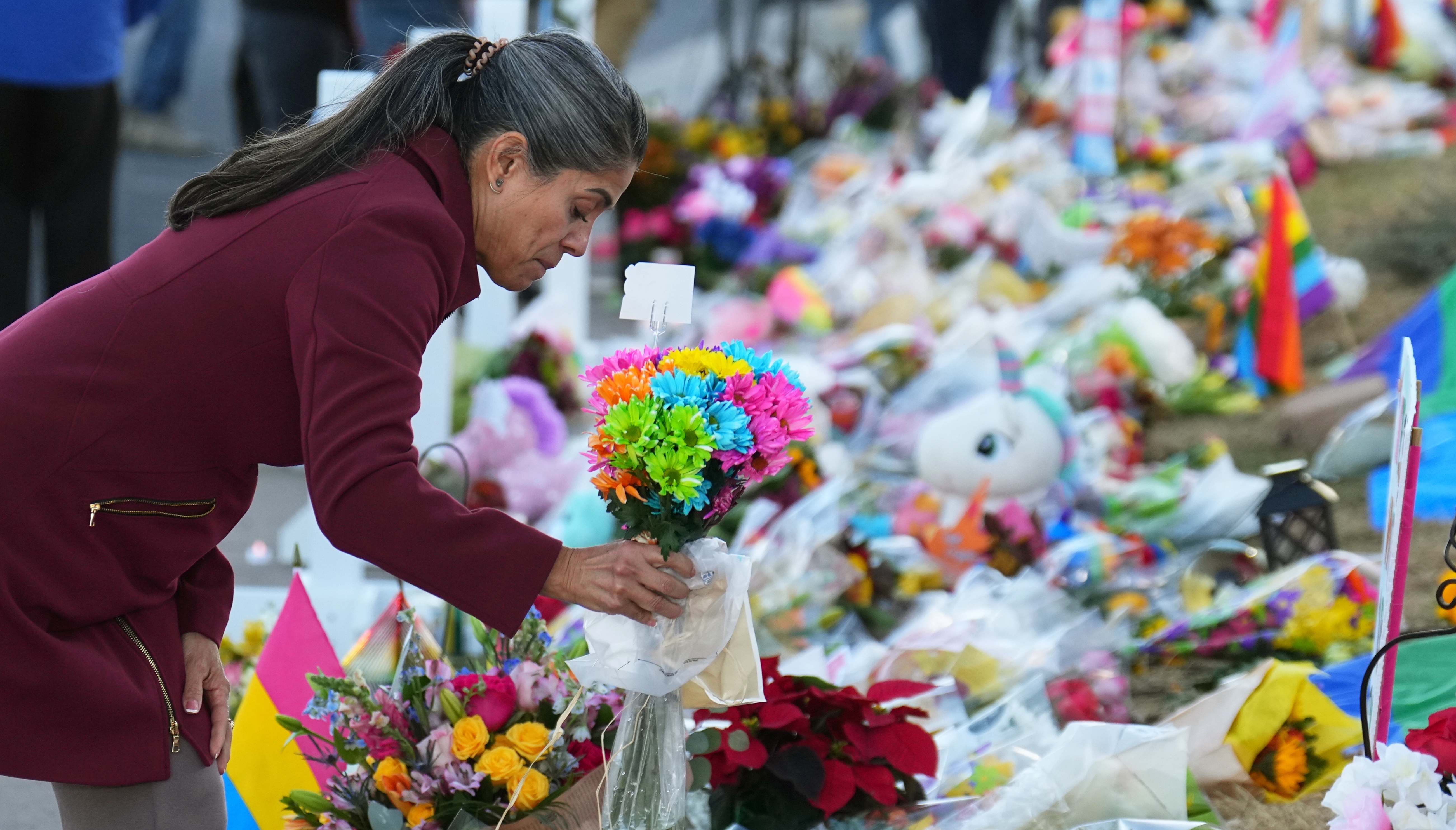 A woman places a bouquet at a makeshift memorial displayed on a corner near the site of a mass shooting at a gay nightclub Monday, Nov. 21, 2022, in Colorado Springs, Colo. (AP Photo/Jack Dempsey) 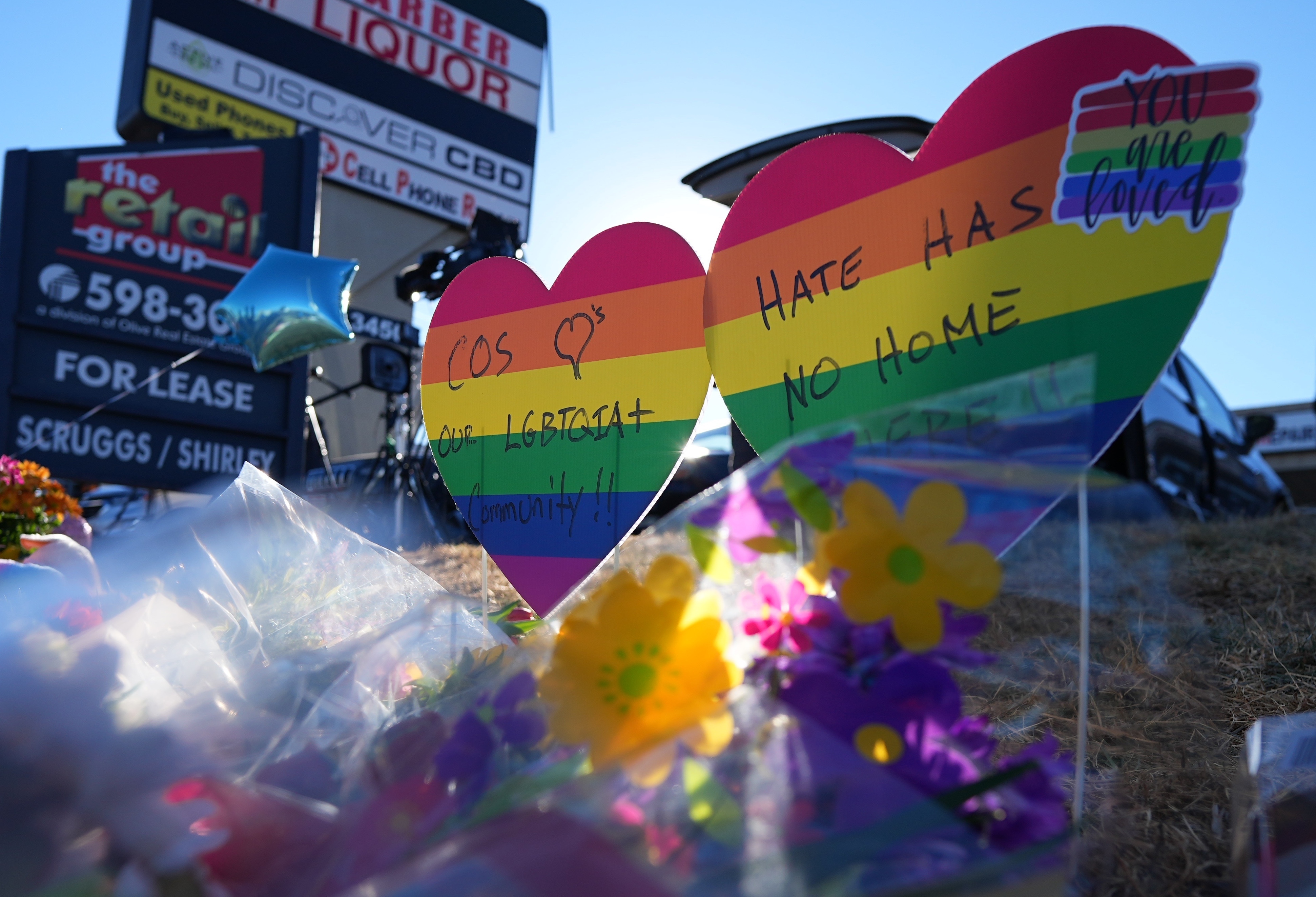 A makeshift display of bouquets of flowers are on display on a corner near the site of a weekend mass shooting at a gay bar, Monday, Nov. 21, 2022, in Colorado Springs, Colo. (AP Photo/Jack Dempsey)