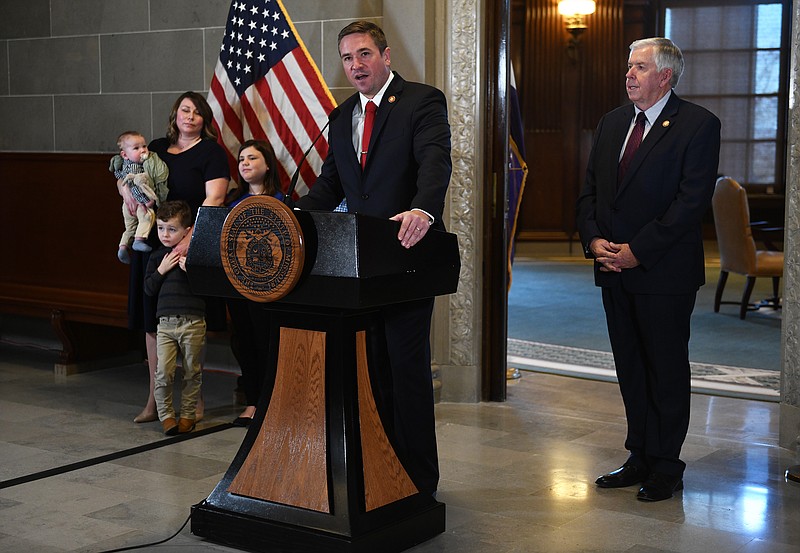 Eileen Wisniowicz/News Tribune photo: Andrew Bailey speaks Wednesday, Nov. 23, 2022, after Gov. Mike Parson announced him as the newly appointed attorney general for Missouri. Bailey's family stood by his side as he took the podium.

The Republican governor announced his selection Wednesday in a news conference at the state Capitol. Bailey, a Republican, was appointed to serve out the remaining two years of Eric Schmitt’s term after Schmitt was elected to the U.S. Senate earlier this month.

Bailey, 41, revealed plans to stay in the position longer with a commitment to run for the statewide office in 2024.

“I’ve practiced law in municipal, state and federal court. I’ve had the honor of leading soldiers to combat and the privilege of serving my state and my community as an attorney,” Bailey said at Wednesday’s news conference. “I’ve never taken the easy path. I’m battle-tested, and I am ready for this job.”

“I’m going to bring my leadership, my legal experience, my fighting spirit and all of the intellectual firepower I have to bear on this mission, and I will deliver victories for the people of this state,” he continued.

Parson said commitment to serving in the office was a sticking point in his selection process.

The state’s past two attorneys general didn’t serve full terms. Republican Josh Hawley was elected to the position in 2016 and then won a U.S. Senate run in 2018. Schmitt was appointed Hawley’s successor by Parson in 2019 and won his U.S. Senate bid three years later.

“Strength and stability are essential,” Parson said. “Transitions are rarely easy, and the Missouri Attorney General’s Office has had its share. Stability will be critical.”

Parson said the historical significance of appointing two people to the attorney general position was not lost on him. Most Missouri governor’s don’t appoint one, let alone two.

Bailey has never held an elected office, but was catapulted to one of the state’s most powerful.

Missouri’s attorney general can serve unlimited four-year terms. As the chief legal officer in the state, the position is responsible for providing legal advice to most state agencies, defending state laws from legal challenges, enforcing civil laws such as consumer protections and environmental laws, and handling all felony conviction appeals across the state. It pays approximately $116,436 per year.

“I’m prepared for anything that comes my way,” Bailey said. “Like I said, I’ve never backed down from a fight. I’m battle-tested, and I’m ready for this.”

The governor said he would do anything he can to support Bailey in an election campaign.

Bailey declined to say which of his predecessor’s lawsuits he’s interested in pursuing, citing the need to study case specifics before making judgments.

Schmitt has filed lawsuits to prop up a wide range of conservative positions, taking aim at social media companies for allegedly censoring free speech and suing school districts for requiring masks and conducting diversity training, which he labels critical race theory. Schmitt also sued the country of China for allegedly starting the pandemic; the lawsuit was tossed out by a federal judge.

“There’s a legacy of excellence that both general Hawley and general Schmitt are leaving behind that I intend to continue and carry on,” Bailey said. “We’re always going to look for ways to get better, but what I do know is that when Missourians who value liberty want someone to stand in the gap against federal overreach, I want to be the attorney general who does precisely that.”

Parson said he based his selection on five core principles: commitment to law and order, patriotism and respect for the Constitution, conservative and family values, and “someone who would promote calm and steady, while never afraid to fight for Missourians.”

The governor’s office had a shortlist of about five candidates for the position, with Bailey as the frontrunner for the past month, according to the Missouri Independent.

He has also been critical in working through the backlog of nearly 3,500 clemency applications the governor’s office inherited from previous administrations, Parson said. He led efforts to close more than 2,000 applications.

Bailey has also advised more than 100 judicial appointments Parson made during his time in office, which has reshaped about a third of the state’s judiciary.

The former prosecutor is credited with crafting talking points for the governor’s office after a St. Louis Post-Dispatch journalist discovered and reported on a security flaw on a state website. The governor’s office called for the criminal prosecution of the journalist, but the Cole County prosecutor declined to press charges after an investigative report found no wrongdoing.

When questioned about the topic Wednesday, Bailey said the issue is resolved but doubled down on his stance.

“I believe section 569095 is still on the books, and that’s in the revised statutes of Missouri, and it says that the unauthorized access, conversion and theft of state data is a crime,” Bailey said. “I would discourage anyone from violating that statute.”

“It’s interesting such a monumental decision as this — one that influences the course of our state’s history — can be made so easily with the right candidate,” Parson said. “And I’m proud to announce we’ve found just that. The right candidate.”

“He is the right man for not just right now, but for the future of our state, who I know will not let us — the people of Missouri — down,” the governor continued.

Bailey is a conservative former prosecutor and Army veteran who served two tours overseas in Iraq. He said he was inspired to enlist after the Sept. 11 terrorist attack on the World Trade Center. He was awarded two Army Achievement Medals, an Army Commendation Medal, a Combat Action Badge and two Bronze Star Medals for his service.

Bailey, a Mid-Missouri native, foster parent and father of four, said it’s an honor to have the governor place his faith in him based on his performance on his staff.

His roughly 10-year legal career has been focused on constitutional law and criminal prosecution, litigating cases up to the Missouri Supreme Court and 8th Circuit U.S. Court of Appeals. He does not have extensive experience in civil cases or consumer protections.

When asked about government transparency, Bailey said he would enforce sunshine laws as written. He said people deserve a government that is responsive and transparent.

“I’m proud of this record because this team also fought for freedom,” Bailey said.

Video of the news conference is archived on Facebook at https://www.facebook.com/GovMikeParson/videos/445824717522593.

“The historical significance of appointing an attorney general for the second time of our administration has not been lost on me," Parson said Wednesday morning during a news conference announcing the appointment. "But such a monumental, history-defining decision can be made so easily with the right candidate, and Andrew Bailey is the right candidate to lead Missourians as our next attorney general.”

Characteristics Parson said he sought in his nominee include a commitment to law and order, patriotism, adherence to the Constitution, and conservative and family values.

Bailey told reporters he intends to run for election for the position when the term comes up in two years. Parson indicated he wanted a nominee who would commit to continuing in the office.

Current Republican Attorney General Eric Schmitt was elected earlier this month to the U.S. Senate for a term starting in January.

Parson will name yet another statewide official to replace Republican Scott Fitzpatrick as state treasurer after voters this month elected him auditor.