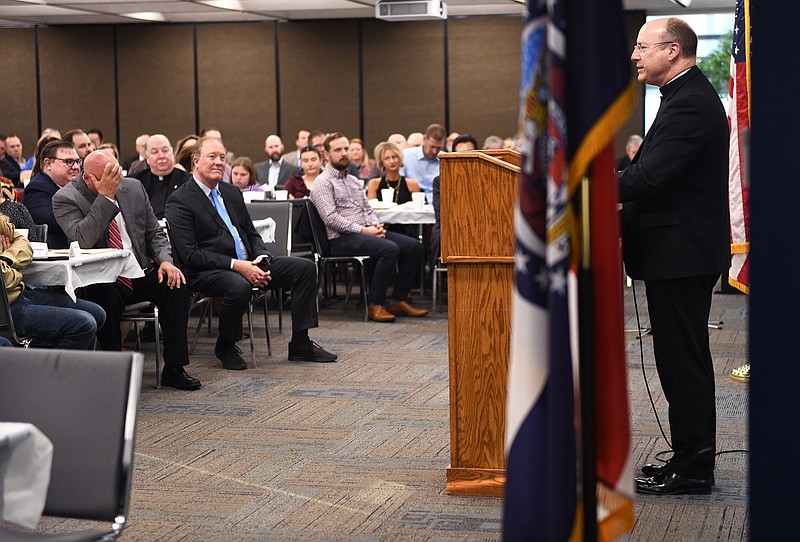 Members of the Jefferson City community gathered Wednesday morning to give thanks during the packed annual prayer breakfast.

"We were taught to celebrate the beginning of a new era and an ideal example of harmony between peoples of different cultures, religions and languages," he said. "We celebrated the fellowship that existed between the pilgrims and the native peoples who helped one another to succeed. And this is a noble part of our history, formed as we are into a union of states. It is good that we as a country take a break from the rat race of life to remember our own humble beginnings."

McKnight referenced the Biblical story in which Jesus healed a group of lepers, after which one immediately turned back to give thanks for the miracle. He called on attendees to give thanks for the blessings in their own lives, including their inclusion in a close-knit community and all of the opportunities available to give back to it.

"Gratitude is a sign of faith, a sign of salvation having dawned upon us with hearts and minds full of gratitude. There is no room for a sense of entitlement in our relationship with God or one another," McKnight said. "When we choose to be grateful in our actions -- by placing the needs of others before our own, even though we may not feel gratitude at the time -- those actions change us and those around us.

"As I speak to you this morning, I am grateful for the gift of my faith, for my church, my family and friends, and our gem of a community here in Mid-Missouri, and the gift of our country. Now is the time to count our blessings. Despite all that I find difficult and challenging in the world, in my family and circle of friends, and even in my church and in myself, I choose to count my blessings and to thank God for all the good that is there."

Bernskoetter, who also served as a sponsor of the event, highlighted the willingness of the community to come together and serve others. He pointed to groups like the Salvation Army, Central Missouri Foster Care and Adoption, Coyote Hill and local churches for the work they do in the community around the holidays and year-round.

"We have so many great organizations: The Salvation Army helps out people, and even the church that I belong to I see is having a Thanksgiving dinner tomorrow. So there's always a place for somebody to go. The Marine Corps has Toys for Tots, and they're always willing to help anybody that needs to get a toy," Bernskoetter said, "There's just so many things to be thankful for. William Clement Stone once said, 'What do you do when you're thankful? You share.' And that's what our community does. They're so caring and sharing, and so I appreciate everything that y'all do."

Legends Bank also served as a sponsor, with President John Klebba touting the tradition as a way to come together and recognize one another and the community.

"It's refreshing for people to put aside their political, religious, philosophical and other differences, if only for a moment, to come together in prayer and thanksgiving for all of God's blessings," Klebba said. "My thanks to the Cole County Communities Committee for organizing this breakfast and allowing us to be a part of it. May the goodwill that flows from this event flow throughout the entire holiday season and make it a truly joyful holiday season for all of us."

The committee also honored Wes and Bethany Prenger as the Cole County Family of the Year. The Prengers have been involved in agriculture their whole lives, Smith said, and live on a century farm near Wardsville with their children, where they raise corn, soybeans, cattle and sheep.

This year's breakfast was once again led by KRCG's Rod Smith, who has been involved with the event since 2008. The Buffington Brothers provided music for the morning, singing both the National Anthem and a musical rendition of the Lord's Prayer. Members of the Russellville High School FFA also volunteered to help serve the morning meal.

The event returned to the Farm Bureau last year after a virtual outing amid the COVID-19 pandemic in 2020, and Bernskoetter and Smith said it was good to get back to meeting in person ahead of the holiday. It is held every year on the Wednesday morning before Thanksgiving.