Lots of school kids are home sick with flu and respiratory viruses. That means frustrated parents are missing work 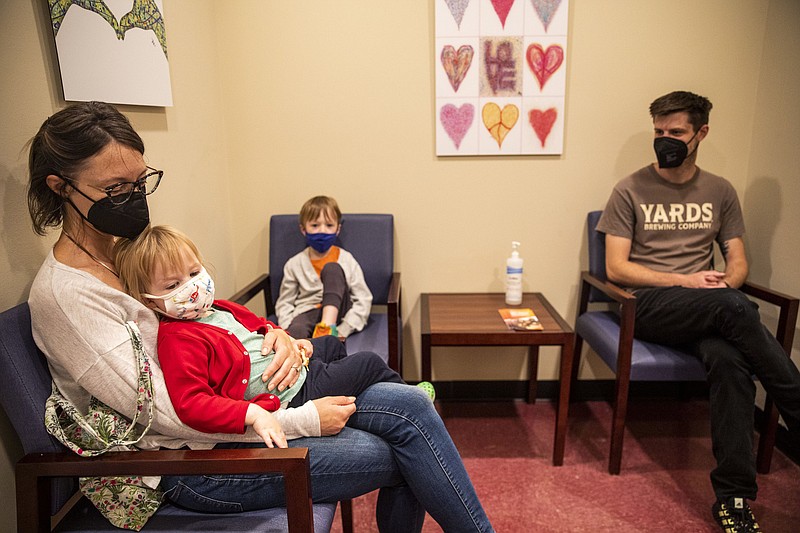 The first-grader attends Gladwyne Elementary in the Lower Merion School District (LMSD), which has seen an unusually high numbers of kids out sick with a potpourri of nasty viruses: flu, common colds, COVID-19, and upper respiratory viruses, like respiratory syncytial virus, or RSV.

Things got so bad at the nearby middle school earlier this month that school administrators contacted local health officials for advice after noticing "a high number" of students out sick at Black Rock Middle School in Villanova, according to LMSD spokesperson Amy Buckman.

With viral illness spiking across Greater Philadelphia and beyond, the Main Line community's chief public health officer, Richard Lorraine, said he's increasingly worried about what he and other doctors nationwide are calling a "triple-demic," with cases of flu, RSV and COVID-19 creating a tsunami of sickness.

More kids home sick also means more parents have had to take off from work. More than 100,000 Americans missed work last month because of a lack of child care -- an all-time high, according to statistics from the U.S. Bureau of Labor Statistics.

For many parents and kids, this is the first full year of school since the pandemic began in which children are in school without mandatory masking, desks spaced 6 feet apart, and scattered lunch areas. And after-school activities, including fall plays and crowded football games, are in full tilt. In other words, a normal school year.

And yet, this school year is proving anything but normal. The virus season came earlier than expected and hit more kids much harder.

Mitchell's daughter, Sophia, has missed a total of seven school days since September. She felt well enough to go back last Tuesday after she developed flu symptoms the previous week, Mitchell said.

"Ever since she's been back in school, she's been nothing but sick," said the 43-year-old mom from Villanova, who had homeschooled her daughter during the first half of kindergarten last year because she was worried about COVID-19.

When COVID protective measures were in full swing, families who stayed healthy realized a side benefit: Cases of strep throat, respiratory viruses, flu and ear infections decreased among children, likely due to social distancing and masking.

Katie Lockwood, a pediatrician at Children's Hospital of Philadelphia, said parents got used to a new normal in which kids were not experiencing the typical "eight to 10 colds a year."

"We just had a little break," she said.

That's no longer the case. On Tuesday, the American Academy of Pediatrics (AAP) and Children's Hospital Association (CHA) asked the Biden Administration to declare a national emergency. The groups cited an "alarming surge" in pediatric RSV and flu cases, and an ongoing mental health crisis among kids -- all of which is overwhelming children's hospitals.

"Our system is stretched to its limit and without immediate attention, the crisis will only worsen," said Mark Wietecha, CEO of the Children's Hospital Association.

As respiratory virus cases surge among kids in Philly region, children's hospitals filling up with 'young babies that are struggling to breathe'

Lockwood said parents need to "follow their gut instinct" when their children get sick. To assess when a child needs emergency medical attention, she urged caregivers to look for signs of dehydration, including if their child hasn't urinated at least three times within 24 hours, or respiratory distress, such as breathing more than 60 times in a minute.

"The majority of kids who get these illnesses are treated at home, or in primary care, and are not admitted to the hospital," Lockwood said.

In Villanova, Mitchell wants to see schools taking protective measures. She has launched a petition, "Cleaner Air at LMSD Schools," urging her Lower Merion district to place carbon dioxide (CO2) monitors and HEPA filters, or "high efficiency particulate air [filter]," in every classroom. As of Tuesday afternoon, the petition had 254 signatures.

She explained the motivation isn't just about keeping children from getting sick. She worries about the economic impact on working parents, especially ones with hourly paying jobs, and that children will continue to fall behind academically.

Her daughter spent a week in bed with fever, vomiting and lack of appetite. Back in September, she was out of school with a cold-like bug for three days. Mitchell said she's convinced her daughter's school and others in the district are not sufficiently ventilated to reduce the risk of virus spread.

"Kids come home sick. They get us sick. We miss work. And it's just a vicious circle," Mitchell said.

Mitchell said she offered to donate a HEPA air filter to her daughter's classroom. Other parents are willing to do the same. "It's something so easy," Mitchell said.

The district, however, turned down her offer, citing a policy surrounding energy efficiency. In an email to parents, Megan Shafer, the district's assistant to the superintendent, said the "LMSD's ventilation systems meet or exceed building code requirements" and the district follows federal, state and local health guidelines. Shafer said students can opt to wear masks.

Lorraine, medical director of the county's Office of Public Health, said he believes masks are actually better at protecting people from respiratory viruses and flu than for COVID.

Experts say families and students should wash their hands often and properly covering coughs and sneezes. Parents shouldn't revert to a strategy that some used for minor illnesses pre-pandemic -- dose their sick children with Tylenol or Motrin and send them off to school.

"It does have this ripple effect, where we see some schools with large numbers of kids absent," CHOP's Lockwood said.