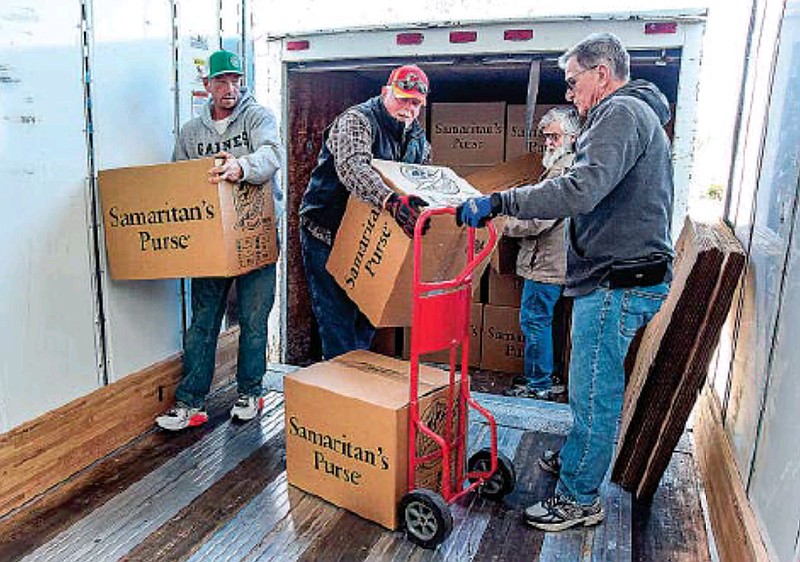 Steve Thompson, at left, carries a case to be counted Monday, Nov. 21, 2022, while Tommy Roam, middle, and Bob Krattli stack boxes on a dolly to be moved to the front of the trailer for counting and stacking. (Julie Smith/News Tribune photo)

Volunteers loaded almost 8,000 shoeboxes full of goodies onto trailers bound for children across the world Monday at Concord Baptist Church in Jefferson City.

The boxes are part of a global effort known as Operation Christmas Child, which has reached more than 198 million children in more than 170 countries and territories since 1993.

Churches, businesses, organizations and individuals put together shoeboxes filled with items for a child. They are asked to put together a box for either a boy or girl, and the children are divided into age categories to ensure they receive items that are appropriate for them. They can include hygiene items, such as toothbrushes or bars of soap, school supplies, containers like cups or bowls, clothing and other items, including a "wow" item such as a soccer ball, doll or stuffed animal.

Boxes are also packed with a booklet that teaches children about Jesus.

The boxes are then taken to a drop-off location, where they are "cartonized," or packed in groups of 14-16 in larger square boxes. Then those locations bring the cartons to be loaded onto semi-trailers, which head to processing centers, where they are unpacked and checked for any items that cannot be shipped overseas, such as food or toothpaste. If such items are found in the customs process, it will prevent the entire shipment from reaching its destination. Items that are pulled out are donated locally.

Bethards estimated around 530 cartons would be loaded Monday at Concord, which would be around 8,000 shoeboxes.

Bethards' daughter, Tia, is a junior and has been packing boxes as long as she can remember.

As a child, she would help pack the boxes, and when she got older, she became a year-round volunteer for student relations, touring high schools and helping them get started with packing boxes.

"I really enjoy that because I get to interact with people my age and get them involved," she said.

There's also an optional tracking label if people want to pay for shipping for their box and see where it goes. Tia Bethards said she's seen her boxes go to Mexico and different parts of Africa.

One girl remembers her favorite item was a fluffy writing pen.

"So she got to go to school with her school supplies and her fluffy pen, and it was so cool that she was able to get that fun, fluffy pen, because it was just special and very different from what everybody else got," she said.